6 Types of People Who Will Love Salt Lake City

When we first came out here in February for a three month housesit, many people joked that we were going to come back Mormon. Those that didn’t, asked incredulously, Salt Lake City?? What are you going to do there??

A lot of cool things, as it turns out. But, I get it. Salt Lake City isn’t on everyone’s radar – it certainly wasn’t on mine before December of last year, when we applied to housesit here. There’s no obvious and recognizable landmarks to identify the city, for one.

It’s also tiny by major city standards, coming in at around 190,000 people (the metro area has just over 1 million people, and the entire state of Utah has just under 3 million).  But Salt Lake (or SLC) can be a fantastic place to live or visit if you’re into the things that it’s good at. If you identify as one or more of the following types of people, consider visiting Salt Lake! We’re sure that you’ll love it.

One word: MOUNTAINS. Salt Lake City is literally surrounded by them.

And I mean ‘literally’ as in, actually surrounded on all sides by mountains. And you can get all up in those mountains, no matter what time of year. Winter draws the skiers and snowboarders, who head up to the five legendary ski resorts surrounding Park City, the location of the 2002 Winter Olympics. If you already know what “powder” is, then what I’m saying is probably not news.

Spring, summer, and fall, it’s a hiker’s paradise. Gorgeous views, and hikes for every level, from paved jaunts, to scrambles up the mountain. Once you’ve exhausted the nearby hikes (though that might take a while), southern Utah is a 4-5 hour drive away, with the Mighty 5 – Utah’s five national parks. Besides the national parks, there’s a plethora of national monuments, state parks, and more, all boasting epic, otherworldly landscapes. Yep, it’s beUTAHful here.

Inside the city, cyclists will find the flat city easy to get around in. We’ve both biked all over New York City for years, and can confidently say that Salt Lake City is very biker friendly. In the heart of downtown, bikers can enjoy their own exclusive lanes, and many well marked shared lanes throughout the city. There is a small city bike share, but unfortunately the covered area isn’t very large. You’re better off buying a cheap bike if you’ll be here for a bit, or looking into a day rental from a bike shop for short term use.

Again, let’s first look at some per capita statistics, because science makes people believe us. A larger percentage of people in Salt Lake City identify as LGBTQ than in New York City.

Yep, if you thought Salt Lake was all Mormon, you thought wrong. Sure, go to the suburbs, especially Provo, where Brigham Young University is located, and that’ll be the case. Not so in liberal SLC. It’s one of the top 10 gay-friendly cities in the U.S., the mayor is a lesbian, and recently, the city declared a major thoroughfare “Harvey Milk Boulevard.” In 2012, The Advocate rated Salt Lake City the nation’s most gay-friendly city.

The city’s annual Pride Festival draws an estimated 35,000 people. We couldn’t even get in it was so packed. Though I might add, you have to pay to get in, which I’ve never seen at a Pride event. Doesn’t that kind of defeat the whole inclusiveness thing?

You can go crazy thrifting here (we have).

With many cool, interesting, and cheap thrift stores, you could seriously overhaul your wardrobe with a trip here (we did). Here are our favorites:

Uptown Cheapskate: Our favorite thrift store chain. They have 3 locations in the SLC area, but the downtown location was our favorite, as it had a selection that fit our personal (alternative) styles best. The downtown one is also next to Sam’s favorite SLC coffee shop, La Barba (amazing coffee, cute and quiet atmosphere, flamenco music always playing – yes, yes, and yes).

Uptown Cheapskate also have the best rewards system I’ve ever seen at a thrift store with tons of sales for “Uptown Insiders” (people who sign up for their mailing list), and $5 off your purchase when you bring a friend who hasn’t been there before (they get 20% off). They also have a punch card system, and you get a percentage off all your purchases in your birthday month! Sadly we’re both summer babies so we didn’t get to take advantage of this.

Deseret Industries: If you’re thinking of checking out Goodwill or Salvation Army in Salt Lake – don’t. We did, and Google Maps lead us to an abandoned looking, old church. Lesson learned. Here, Deseret Industries, the non-profit arm of the LDS church, reigns supreme. They operate massive, warehouse-like thrift stores throughout the area, selling donated clothes, furniture, board games, etc. They’re well-organized and well-run, and the cheapest in town. You’ll have to do a little more digging here, but you can make out like a bandit, like getting a pair of $100 Free People jeans for $6.

Iconoclad: Iconoclad is Uptown Cheapskate’s punky sister. Go here for your funny cat shirts, platform combat boots, and printed leggings. You can sell your clothes here, though they’re very selective with what they accept, as the store is pretty small. They also sell new locally made/printed clothing and jewelry. They have a resident cat and a free bin that looks like something Oscar the Grouch would jump out of.  When you buy something you get to take something from it, and though most of the time there’s nothing exciting, I did get a great summer dress from it once. Iconoclad’s also just down the street from Bud’s, and it seems that we’re not the only ones that would make an afternoon of eating some bomb-ass vegan food and then picking up some new funky clothes afterwards.

We’ve said it before, we’ll say it again. Salt Lake is incredibly vegan-friendly, especially for a small city.

We calculated the vegan restaurants per capita (within the city limits), and it’s on par with notoriously vegan Portland – impressive, to say the least. Salt Lake City has two vegan bakeries, a raw vegan restaurant, a vegan , a vegan Vietnamese restaurant, not to mention an amazing vegan Mexican buffet, a vegan all-you-can-eat pizza night….we’ll stop there. Check out our vegan guide to SLC for the full, juicy list. And that’s not even counting all the places that have amazing vegan options. I’ve never been to a coffee shop that doesn’t offer almond milk (my preference over the more-often found soy). This place has got your plant-based back.

Salt Lakers clearly take pleasure in the earthly liquid delights, and they won’t just drink anything. SLC has strong craft coffee and beer scenes, with many roasteries and breweries serving fantastic drinks.

I’m a professed coffee addict and lover, and (as much as I hate to admit it) might even be descending into the realm of coffee snob. I’m not even ashamed to admit that I cold brew my own coffee and get unreasonably angry at coffee shops that serve anything but spectacular coffee. I mean, what kind of coffee shop sells mediocre coffee?! Even one is too many.

For lovers of another liquid pleasure,  SLC is home to many breweries, including Epic Brewing Co.,  Uinta Brewing Co., Red Rock Brewing Co, among others. A couple caveats to note first: it might come as a surprise, but beer flights are not a thing here, due to Utah’s recently more flexible yet still strange alcohol laws. There’s also no happy hour. Despair not! There’s still lots to enjoy – check out Visit Salt Lake’s Best Breweries in SLC for a complete run-down.

Arguably, if you correlate thrifters, vegans, coffee addicts and the LGBTQ population, you probably get an even higher percentage of artists, so it’s not a surprise that SLC is a great place to be one.

Among other things, artists need affordability, an inspiring setting, and a community to share their work in. Salt Lake has affordable rents just a short drive away from serene mountains as well as an already a substantial artist community, with lots of galleries and community art organizations. On every third Friday, artists open their galleries and spaces for the Salt Lake Gallery Stroll, though we do have to point out that it’s more of a drive (or bike ride), because SLC is so spread out that there’s no way you could walk to more than a couple in a night.

If you identify as one or more of these types of people, take a closer look at SLC for your next trip. Two or more, definitely head over for a short stay. Three or more, you should probably be living here. If you’re from one of the coasts and Utah feels too decentralized, never fear – the SLC International Airport offers direct flights all over the states (Delta has a hub here) and has been adding more direct international flights (eg. London, Amsterdam, Toronto). We happily have flown direct from NYC to SLC on both Southwest and JetBlue.  The airport is an unreal 10 minute drive from downtown, and public transportation goes right to it in 30 minutes. Couldn’t be easier! 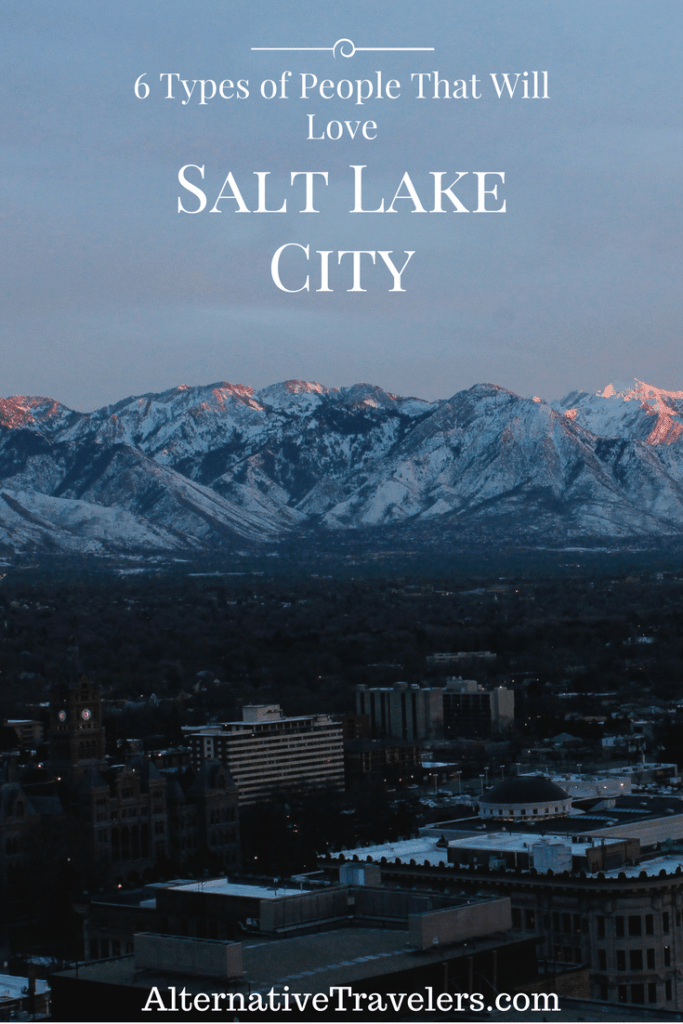