Baltimore is a city of neighborhoods, and like any city, there are good areas and bad areas. Baltimore though, seems to get its rap from only the bad ones. The Wire. The West Side. Freddie Gray. Chances are, you’ve heard these words and names, and associate them and the city with violence and crime. And sure, those things do exist. Baltimore is definitely one of the grittier cities I’ve been to.

Native Baltimorean and writer Tim Kreider perfectly sums up the difference between Baltimore and New York through their dive bars. In New York, he says, there are “dive themed bars,” as compared to the actual dive bars of Baltimore where you might actually “get punched in the face for no reason at all.” And after spending a week there, I see exactly what he means. Baltimore is a real city where real people live, lacking the pretension that can often be so sadly characteristic of an increasingly larger area of New York. In New York, I often wonder who is affording the ubiquitous multimillion dollar high rises. How can all those people possibly be earning such exorbitant amounts of money to live steps away from Central Park, in the heart of the West Village, in the TriBeCa condos? What could they possibly all be doing? In Baltimore, I didn’t wonder that at all. Baltimore is up front about what it is and it isn’t. It isn’t trying to hide behind a mask of Instagram filtered lattes. But it is eclectic and alive, unexpectedly historic and unique. 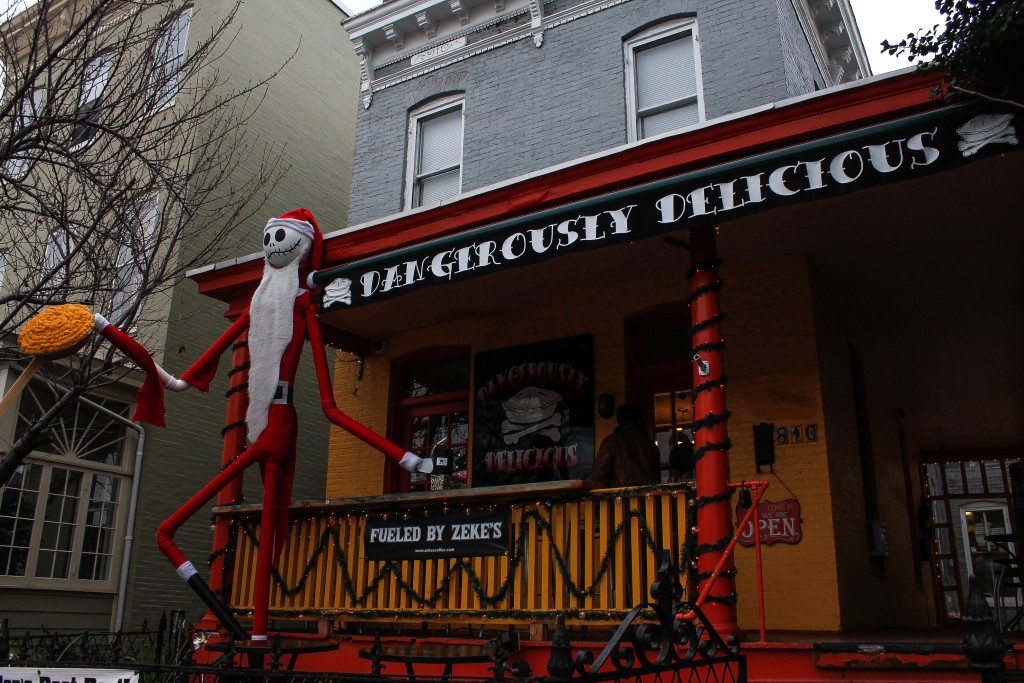 A stroll through historic Lexington Market around lunchtime is a perfect example of the vibrant culture of Baltimore. The indoor market, started in 1782, is the longest running market in the country, and is housed in a huge domed space into which dozens of little stalls are crammed. These booths serve up a variety of foods, from the more normal fried chicken and crab cakes to fare for the slightly more adventurous: muskrat and raccoon.

Walking in, we were immediately bombarded by a deluge of smells, getting swept up with the throng of people moving from one stall to the next. While I’ve been in similar large indoor markets in Europe, they’re invariably touristy, selling small figurines of the famous monument of their city. There was none of that here. The facility made no qualms about the lack of any kind of aesthetics, with bright fluorescent lights overhead and grungy floors underfoot.  Local Baltimoreans were clearly in the majority of customers at the market, besides the small area near an entrance where a few tourists were corralled, too nervous to set foot in the expansive market, and instead sticking to the expensive crab cake shack and shying away from the local fare of muskrat and raccoon. It was quite the cultural experience but not exactly a vegetarian’s paradise… we moved on without sampling anything.

Even though Lexington Market didn’t deliver (for us) in terms of food, we were pleased to see a surprising amount of vegan options available in Baltimore, from the entirely vegan soul-food kitchen Land of Kush to Johnny Rad’s pub/pizzeria where you can veganize any pie they have on the menu.

Besides the food, there’s plenty else to explore throughout the city’s diverse neighborhoods. From street art to multiple art museums featuring world-class artists, Baltimore is an unexpected haven for creative types and those that appreciate them. Baltimore literally (pun also intended, not apologizing for my love of puns) has a free bookstore, called The Book Thing, where you can walk out with armfuls of tomes from one of the many large rooms.

Though we stayed in Highland Town, we found an affinity for Hampden, the so-called ‘hipster’ neighborhood of Baltimore, populated by the affectionately named Hampsters (Hampden hipsters). Hampden was our type of town, with too many coffee shops to count on the main strip, a vegan bakery (sadly closed for the holidays), and a macabre gift shop. Like most of the Baltimorean neighborhoods we explored, the “main street” of Hampden is fairly small, and separated from other clusters of activity by swaths of residential row houses that are so characteristic of Baltimore. 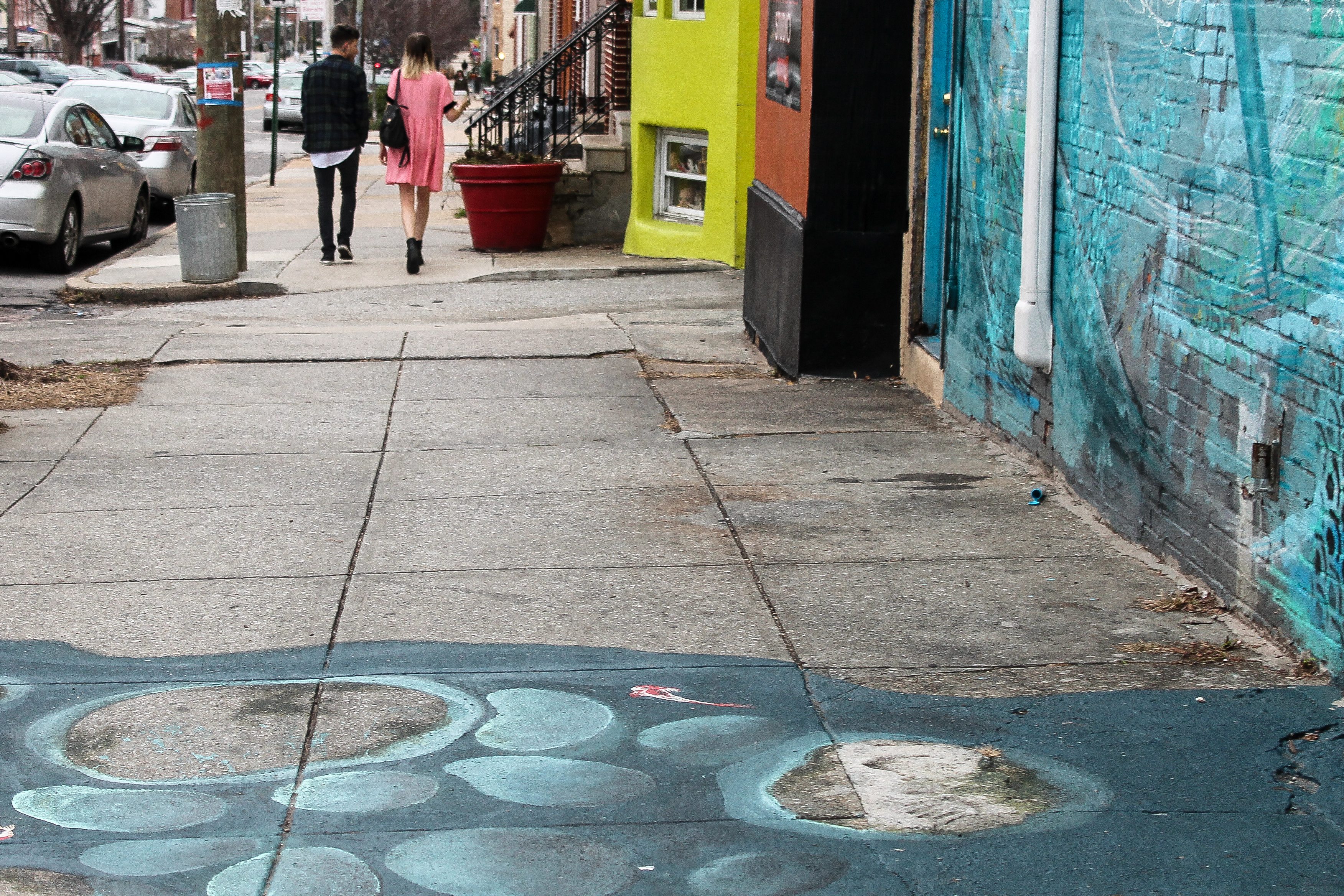 Look, Hampsters in the wild!

As a history lover, I was surprised and excited to learn that Baltimore has more public monuments per capita than any other city in the United States and some of the earliest sites on the National Historic Register. I couldn’t believe it surpassed New York and Philly, but Baltimore tends to sneak up on you like that. Baltimore played an integral part of American history, as the site of many battles during the American Revolution, and the place where Francis Scott Key wrote our national anthem, “The Star Spangled Banner.” The Fell’s Point neighborhood is one of the more picturesque historic neighborhoods, situated on the still very active harbor. The area feels like a separate seaside town, with the salty smell of ocean on the air and cobblestone streets lined with old taverns and restaurants. Mt. Vernon is a nice and historic neighborhood on top of a hill, with many spots to visit. 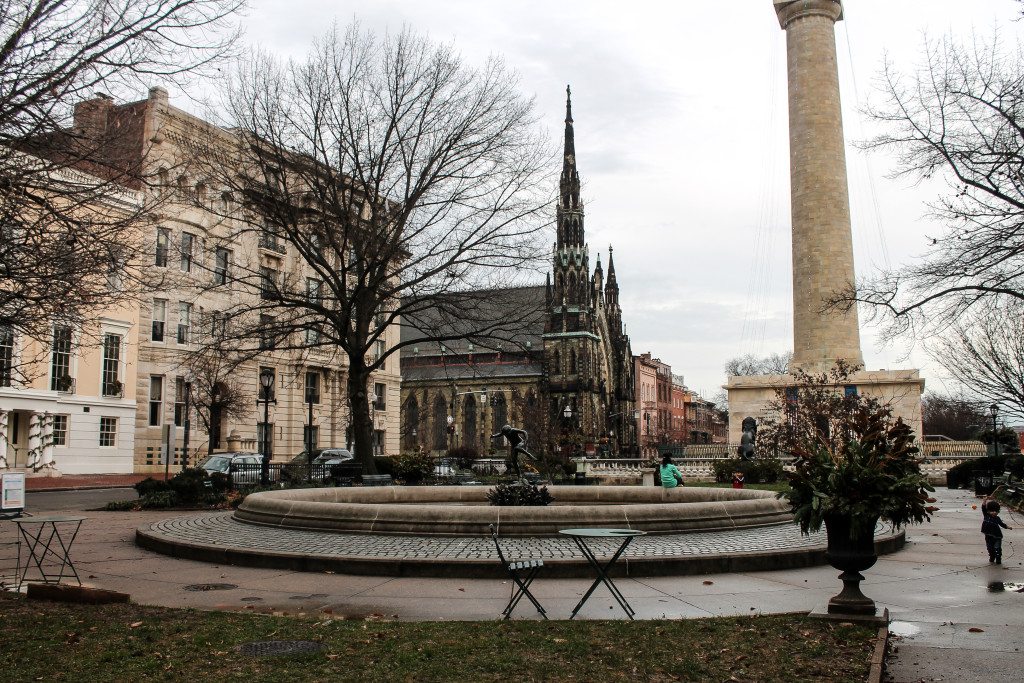 Washington Monument and a church that reminds me of one in Edinburgh.

One day, walking around, we stumbled upon Edgar Allen Poe’s grave, and seeing a sign for his house showing it was only half a mile away, we decided to go have a look. We followed the street past the University of Maryland, and straight into what turned out to be the notorious west side of Baltimore. Instead of finding the esteemed writer’s house, we found quiet empty lots and abandoned row houses buildings peering down at us through their boarded up eyes. The hairs on the back of my neck began to alert themselves as I became more and more acutely aware of our presence walking down the silent streets. The architecture spoke of a past heyday, with large beautiful churches and grand stoops, yet today the buildings are 45% vacant, victims of their inhabitants’ migration to better parts of town. I wish I had photos, but at the time, I didn’t feel comfortable enough to use my large camera, afraid of the tell-tale clicks that my DSLR would make in the quiet air, calling unnecessary attention to ourselves. I felt strongly like we shouldn’t be there, and even though it was the middle of the day, it felt eerie, like a ghost town. Which in a way, it was. A quick retracing of our steps brought us back to the downtown, but I remained on edge for the rest of the day, haunted by the sharp reminder that Baltimore’s grittier neighborhoods lie just one wrong turn and a few blocks away. 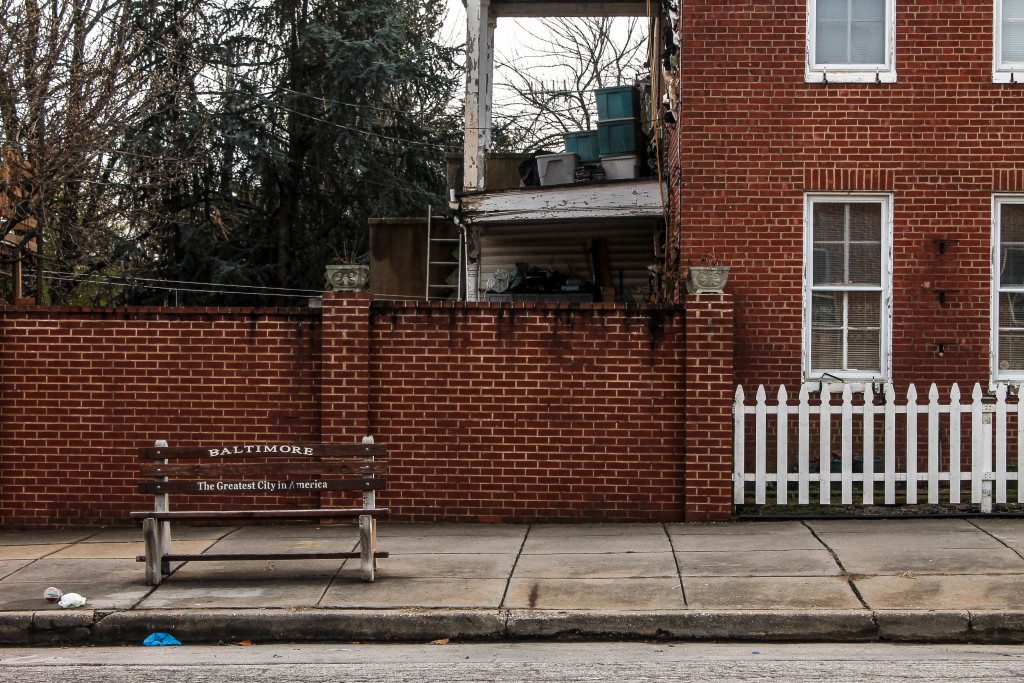 There’s no denying that parts of Baltimore may be a little rough around the edges (and centers). But it’s also creative, fun-loving city with its own unique flavor, if you’d just give it a taste.

6 Types of People Who Will Love Salt...