If you’re like us, then you probably spent some time beforehand agonizing whether visiting a place (or staying longer) was worth it just to attend a vegan food festival. Festivals, in general, are very hit or miss, and vegan festivals are no exception. This past weekend, we attended the VegOut! festival in Portland, Oregon, and it got us wishing for better vegan fest days in Berlin last summer. It’s should come as no surprise that Berlin has one of the best and indeed the biggest vegan summer festival in Europe, after all, Berlin is one of the best cities in Europe for vegans!

We spent last summer house sitting around the United Kingdom and ended the summer with our second visit to Berlin in 2017 (house sitting both times through TrustedHousesitters). Coincidentally, Sam’s birthday fell on the weekend of the Berlin Veganes Sommerfest (vegan summer fest in German), and since it was free, it was a no-brainer that we go. We also got to meet and briefly hang with other Berlin-based vegan bloggers (Indefinite Adventure, Vegan Nom Noms, Blissful and Fit), which was a blast!

It got us thinking though – would we have traveled into town for the event? We had no idea what to expect. We wished there was a blog post out there giving us the run-down of the goings on, so we could gauge what it was going to be like. We didn’t find one, so we wrote one! 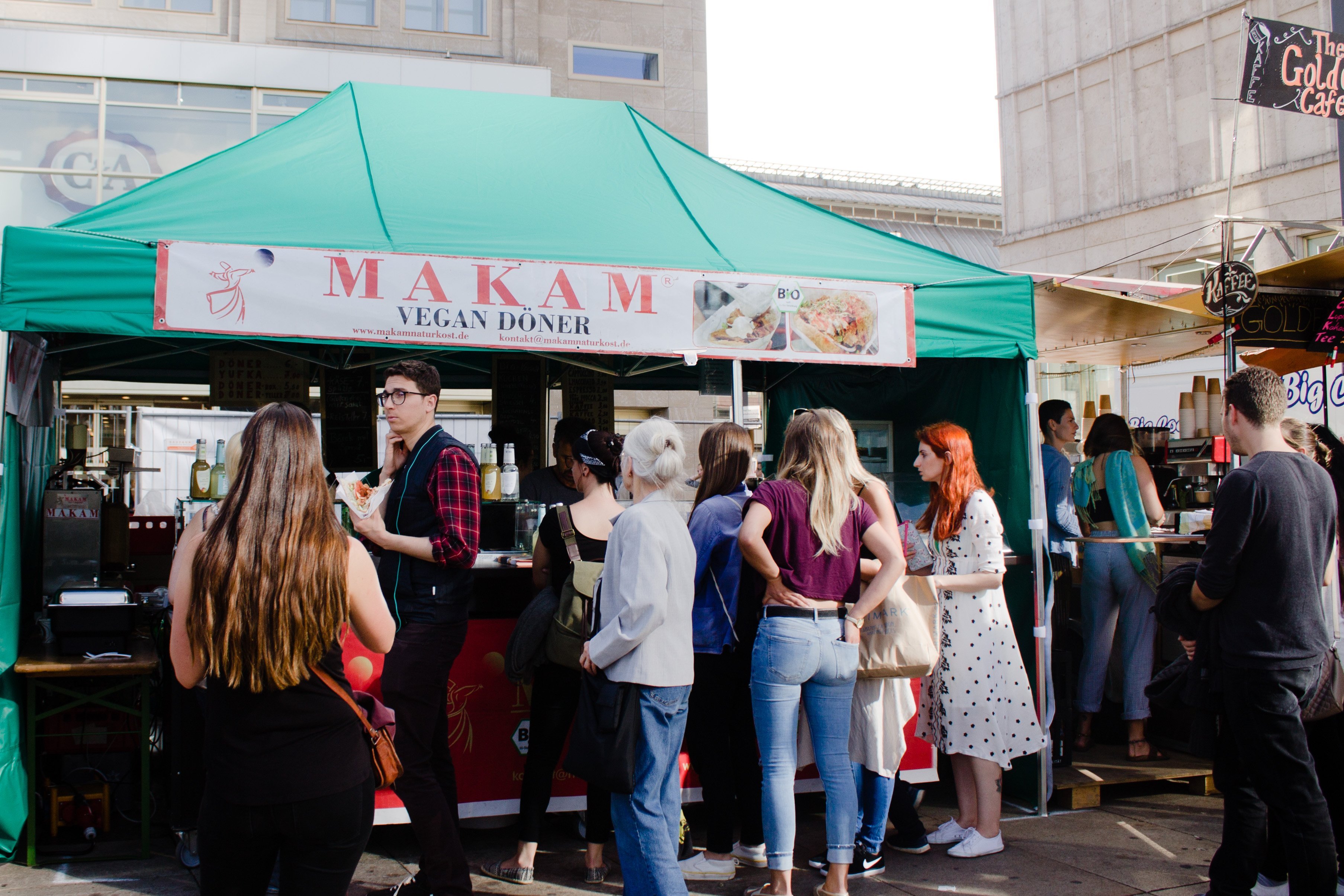 One thing we wondered was whether tickets needed to be purchased in advance. Once we found out the event was free, we still wondered whether we needed to reserve a spot, or how it worked.

The event is completely free and open to the public – pretty impressive when considering that it’s the biggest vegan summer festival in Europe. There is no need to reserve tickets, just show up! The festival lasts three days (Friday, Saturday, Sunday),  usually the last weekend in August. If you can, we recommend going on Friday as it’s less crowded than weekend days.

The festival takes place in Alexanderplatz, one of the main squares in Berlin. There are no barriers to entry, and people can come and go as they please. We love this model for a vegan festival, as it encourages passersby to learn more about veganism at no cost to them. Most of the vendors hand out samples or some sort of free item. The festival has people standing right before the booths start, talking to people and handing out information flyers. We definitely saw more than a few people stop and talk/think. It’s a great location to attract the maximum amount of street traffic rather than only focus on vegans who already know about the event.

Near one of the entrances, there was a giant pig urging people to go vegan. 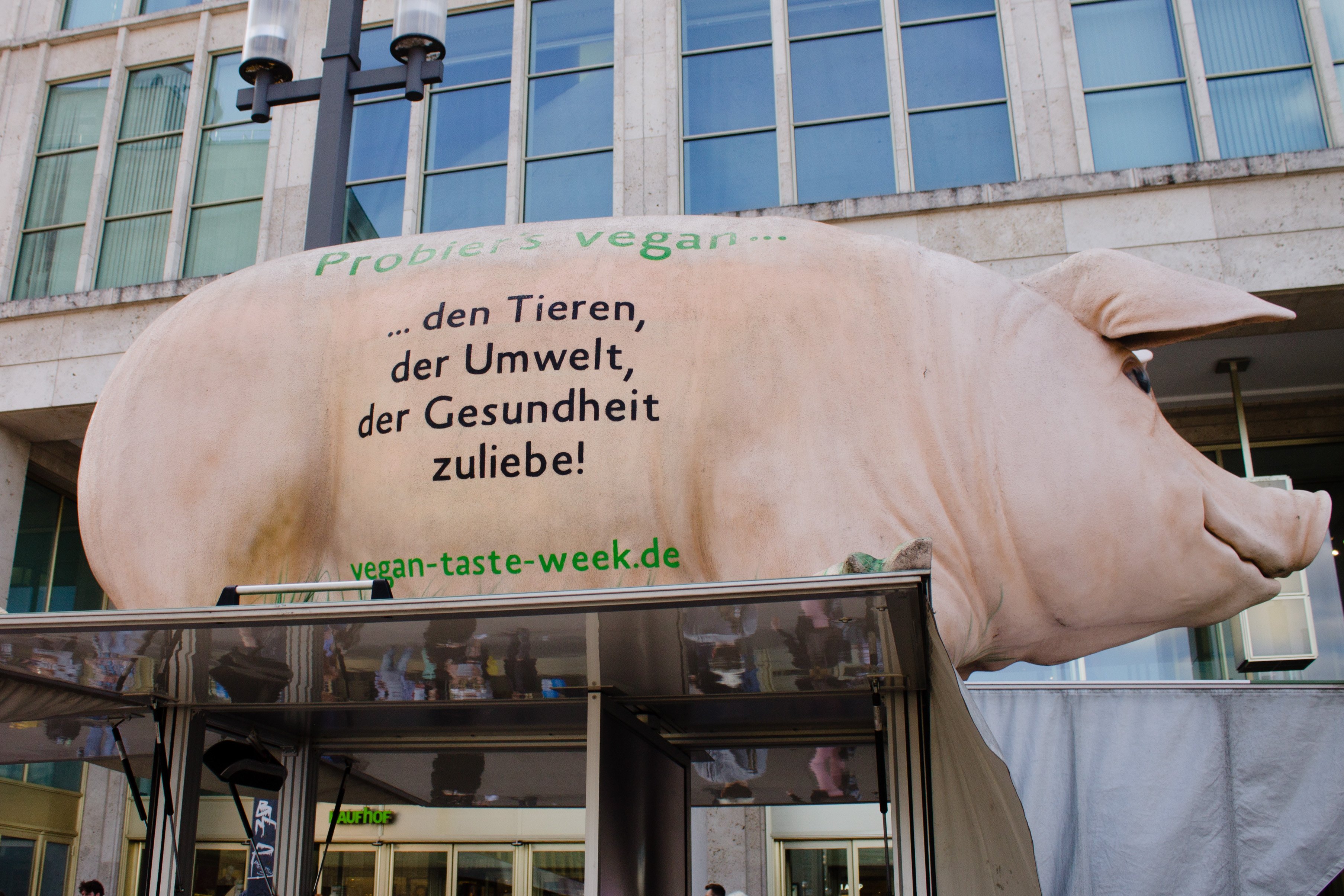 “Try vegan…for the sake of the animals, environment, and health!”

As you might expect, a lot of the food stands at the festival are local establishments. If you’re only in Berlin a short period of time, you can try many Berlin vegan food classics all in one place – including the famous Brammibal’s donuts! If you’re in Berlin for a while, many of these are worth their own proper visit so come to check out the places that aren’t local (like Serotonina – see below). 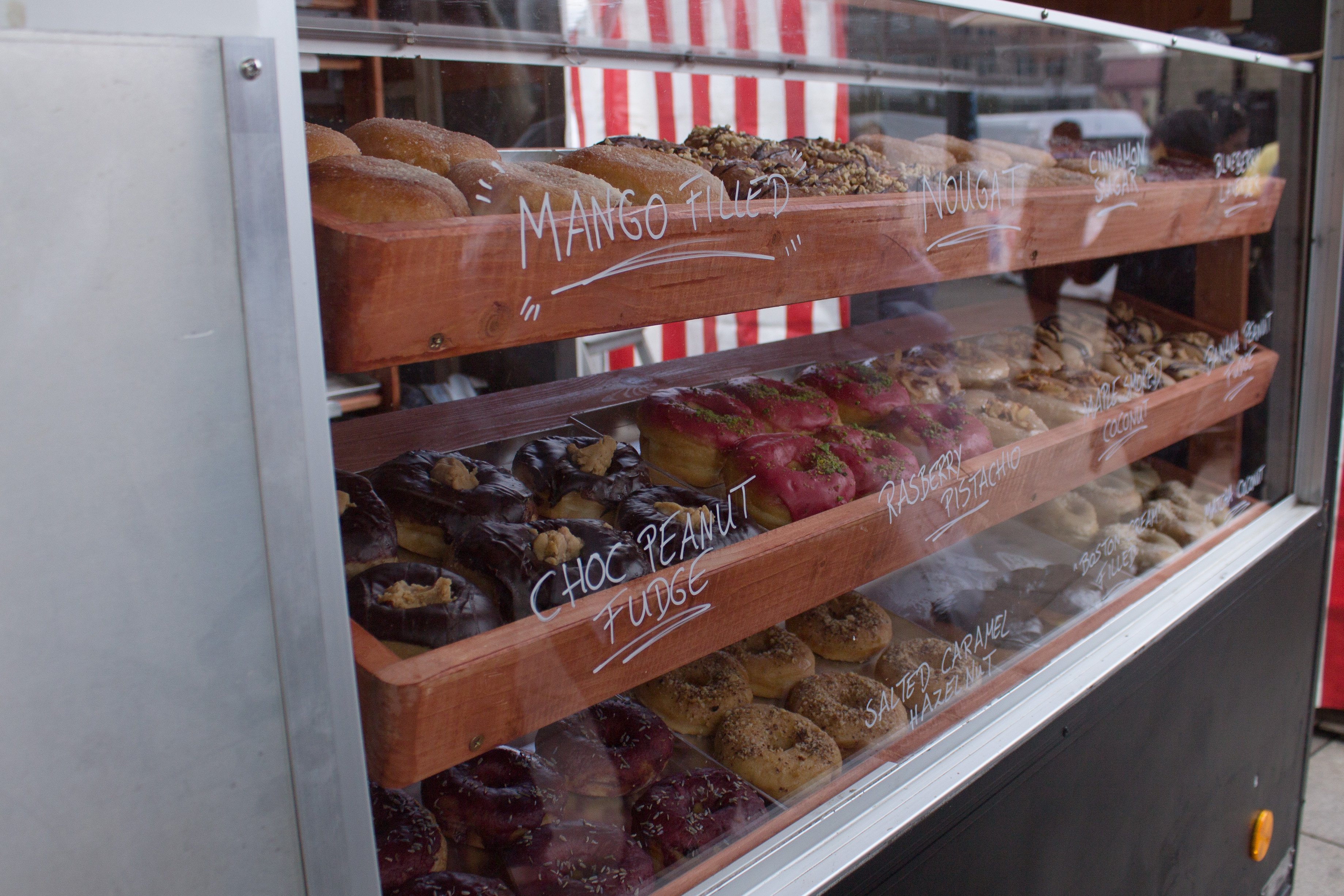 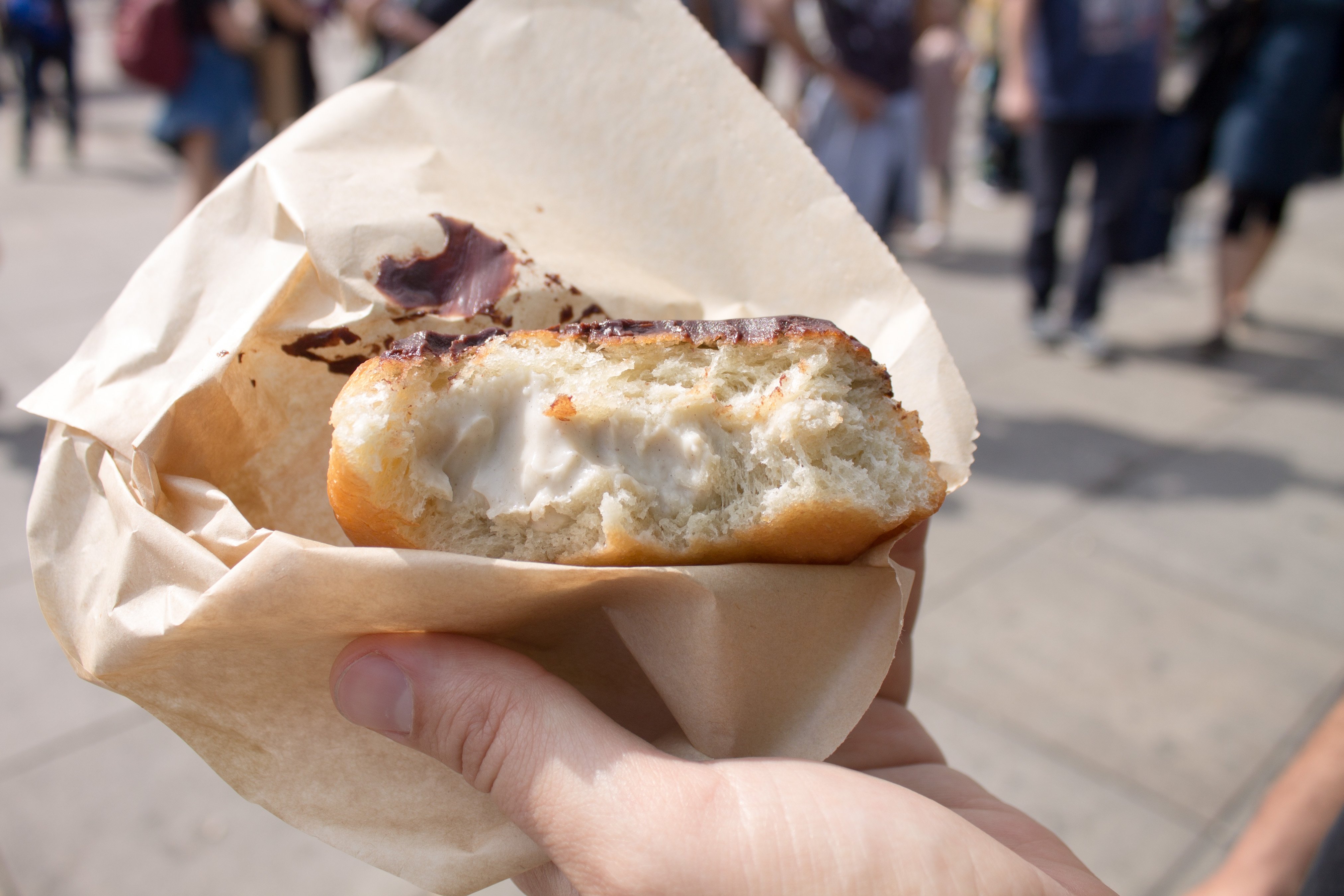 One of the best damn donuts ever.

While we did try a couple spots that were local to Berlin, we really wanted to sample food from out of town stalls. This visit, we were in Berlin for almost a month, so we had plenty of time to visit local establishments outside of the festival.

If you go to the festival, you MUST NOT MISS Serotonina Vegan Cheese. These guys hail from Wrocław, Poland (about 3 hours from Berlin) and make some delicious artisan vegan cheeses. They have a pretty big variety, and we were impressed with the rinds on their cultured and aged cheeses. They featured two bases (cashew, and soy), both made with probiotic cultures. There were many “styles” such as cheddar, feta, blue, brie, and camemberts – all with their own names that sometimes reference the original, like Fetina (feta) or Gorgon (gorgonzola).

Best of all, they have free samples of all of them, and are super happy to talk about their cheeses with you! 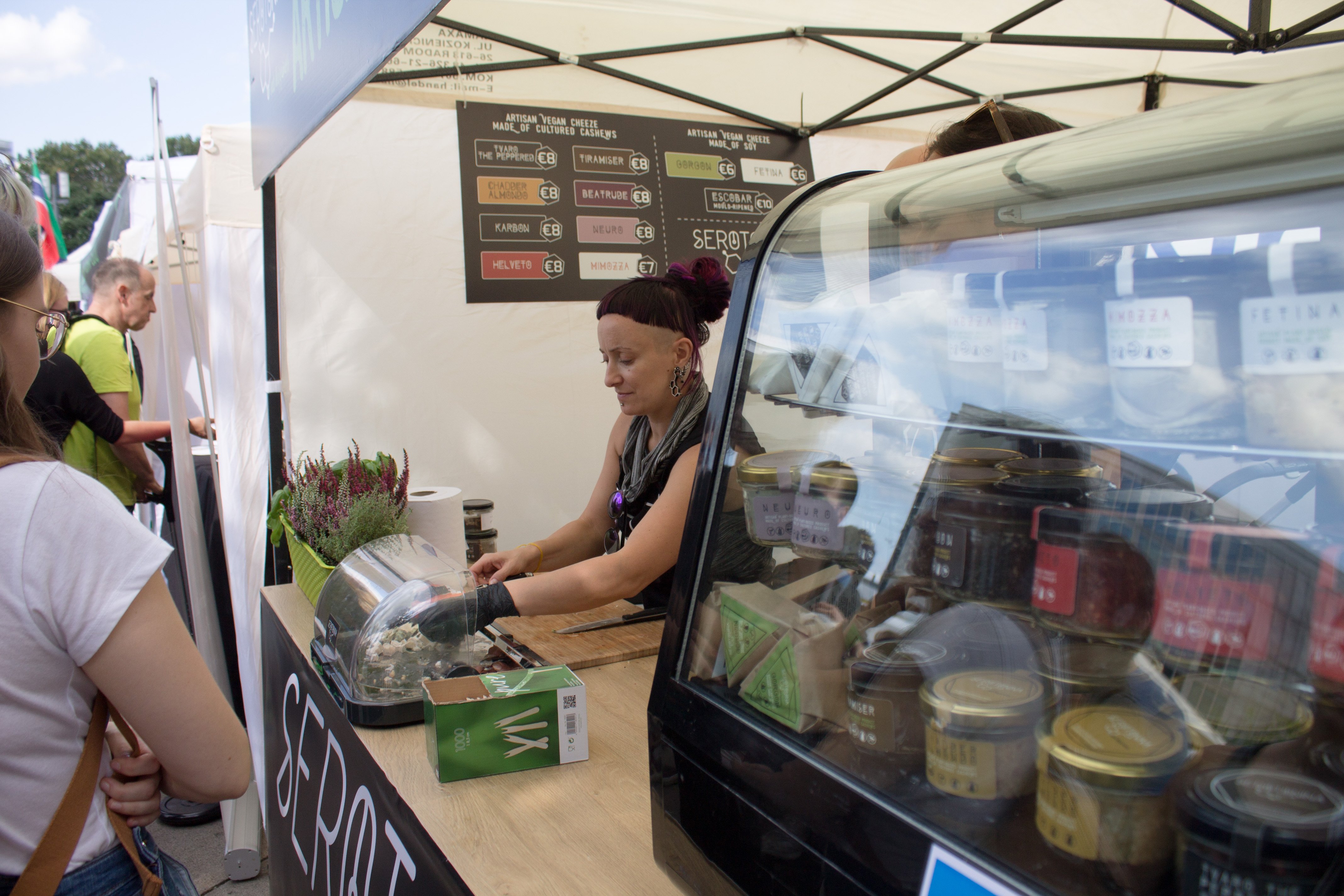 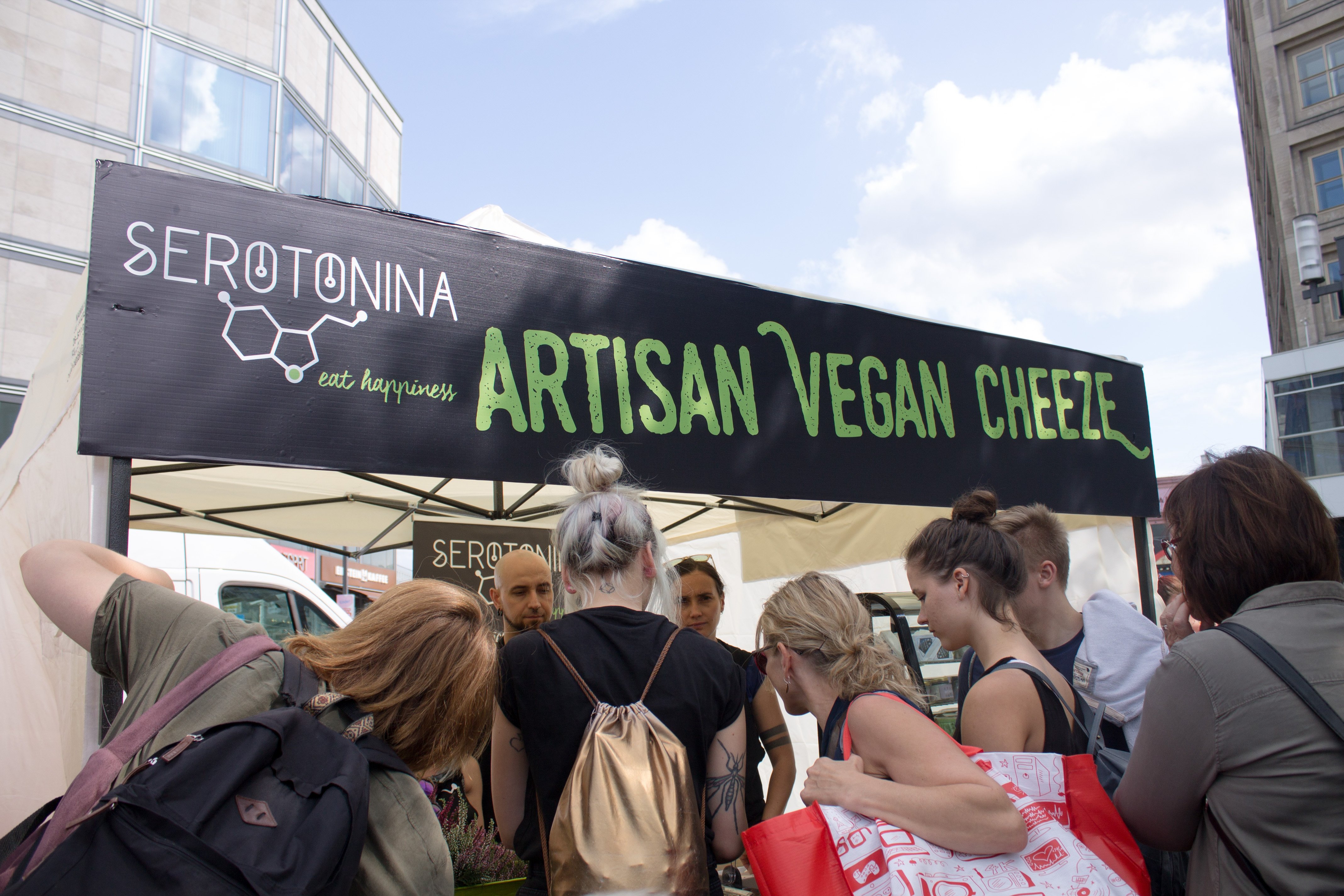 Just gotta elbow your way in between the people hogging the free sample table!

These cheeses were so good, we got a couple of blocks to take back to our house sit with us, specifically the camembert style Escobar (mold ripened with Penicillium camemberti) and gorgonzola style Gorgon. The camembert had that same familiar rind and taste, with a creamy but thick enough to slice texture. The Gorgon is soft and smooth, but sharp and very blue cheesy. 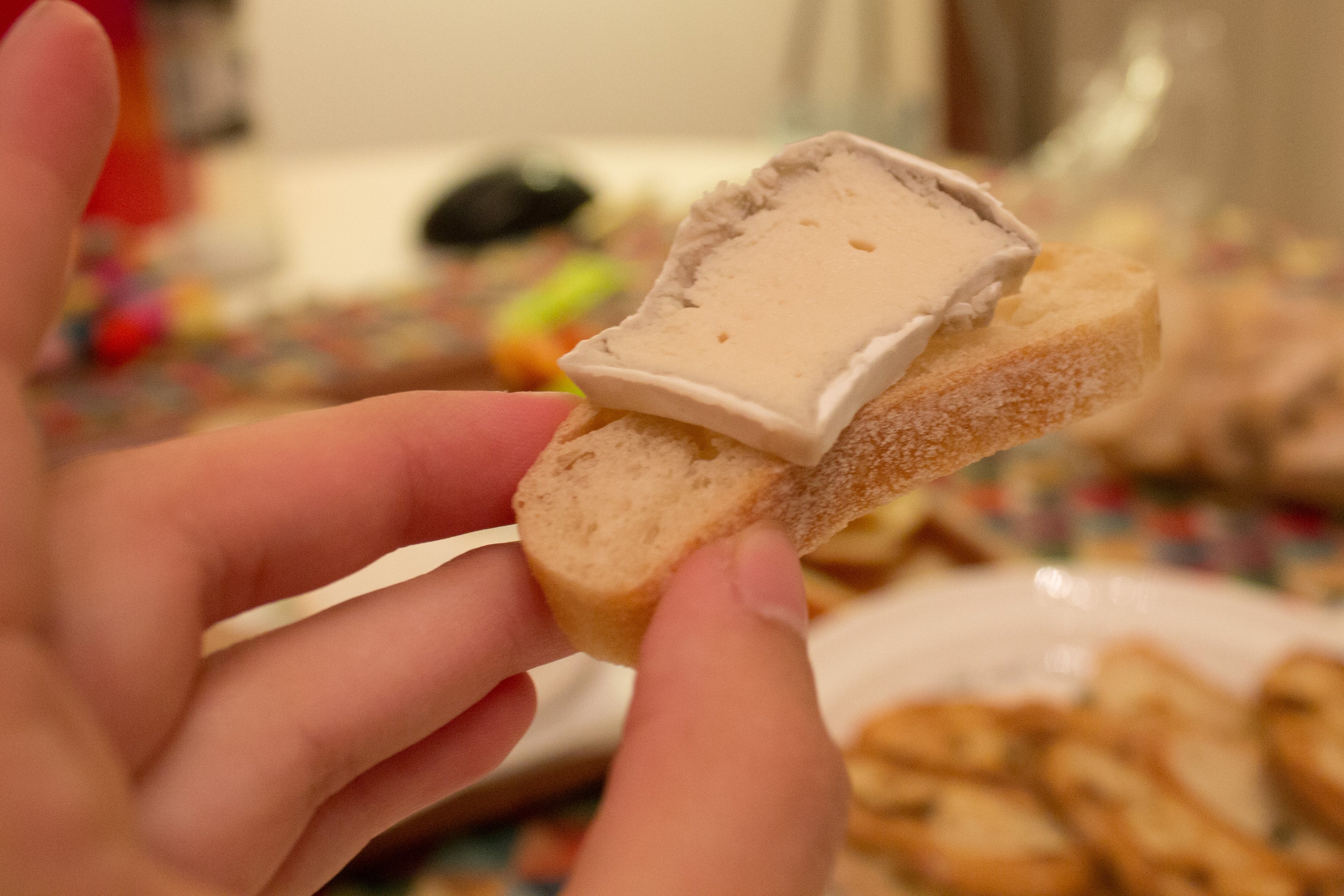 They were super affordable too, compared to all of the other vegan cheeses that we’ve tried (and consider vegan artisan cheese, in general, is very expensive). Veren would fly to Poland (or Veganes Sommerfest) just to eat all these cheeses again. 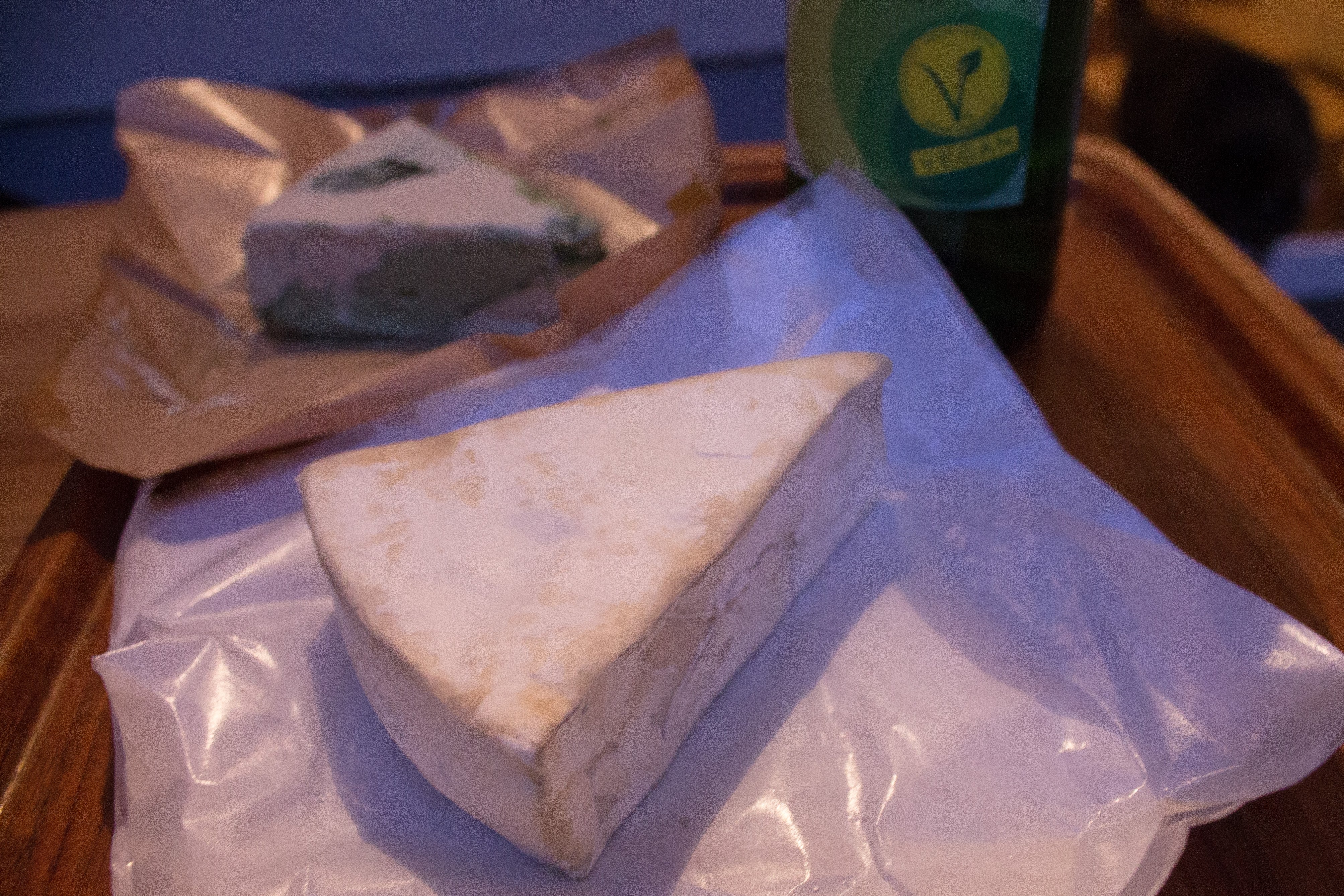 The Escobar and Gorgon: unwrapped and waiting to be devoured.

Buuut there’s a lot more to the festival than food (although let’s be real, we’re all mostly here for the food). If you’re looking for apparel and clothing, there are several vendors selling vegan t-shirts and shoes. We didn’t delve too much into these as we travel with minimal stuff, but there was quite a variety! 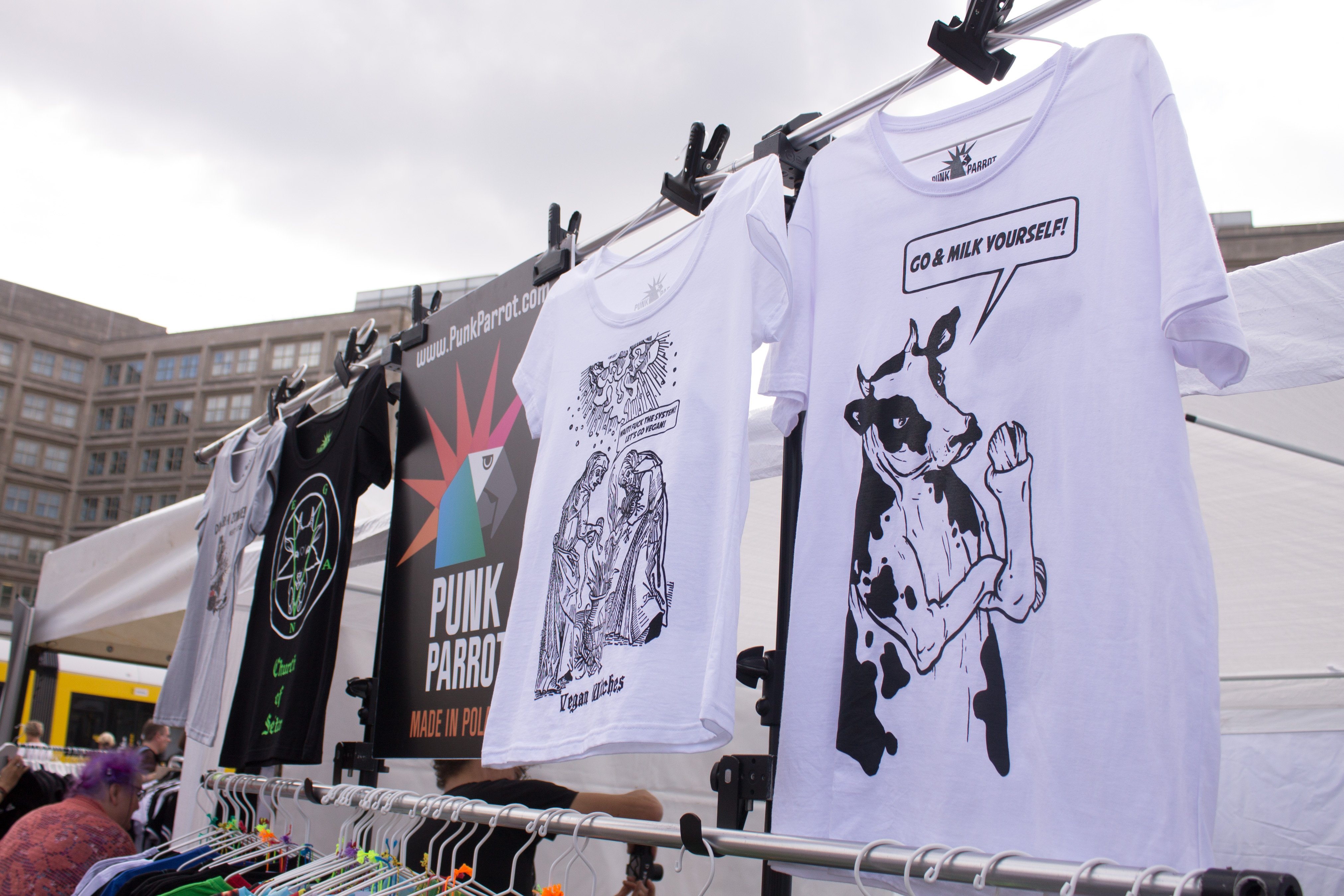 There are also many free talks at the festival, located in a tent off to one side. We didn’t attend any as we were too busy stuffing our faces! But it’s definitely something we’d try to catch if we went again.

FINALLY: Don’t leave the festival without spinning the freebie wheel! You can get free stuff from their sponsors, which include Oatly, Provamel, Plantex, and more. We got some nice plant milks and to try a new product from Oatly, an orange smoothie drink! You can’t miss the giant tent with a huge crowd under it.

For more information on vendors and this year’s festival, head to the Veganes Sommerfest Berlin website.

Need more guidance on your vegan travels in Berlin? Check out our:

Alternative Things to Do in Berlin

Any more questions on the Berlin vegan summer festival? Let us know in the comments below!

A Food Philosophy of Eating (Vegan): Inspired by...

The Best Eco-Friendly Travel Gear (all Vegan too!)

Decolonizing the Colonial Mindset in Travel