Home Europe A Day Trip to Isle of Arran, aka Scotland in Miniature!
EuropeScotlandUnited Kingdom

A Day Trip to Isle of Arran, aka Scotland in Miniature!

My parents have a story about the Isle of Arran.

I’ve heard this story many times over the years and it always sends a chill up my spine. I knew it took place in the UK somewhere but wasn’t sure where; if my parents said the Isle of Arran, it meant nothing to me before.

It wasn’t until we took a day trip to Isle of Arran that I thought to ask my dad if he’d ever been. When he responded with that infamous story, I can’t say I was surprised.

We visited the Isle of Arran from Glasgow as a day trip, but even so, the island felt like a world away.

In this post, we’ll share fun things to do on the Isle of Arran, some tips for a cycling tour like we did, and places to stay on Arran if you decide to extend your trip!

The Isle of Arran is known as “Scotland in Miniature” due to its small size relative to its varied diversity in landscapes.

The island is only 19 miles long by 10 miles wide yet there are beaches, forests, mountains to climb, historic castles to explore, local producers to eat and drink at, cultural museums to dive into, and much more.

There are so many things to do on the Isle of Arran that you won’t be able to see it all in a day! We’ll share some highlights with you in this post, that way if you’re pressed for time, you can pick and choose.

We explored the island independently, but if you prefer a guided tour, check out this 3 day small group tour from Edinburgh.

If you want to extend your day trip to Arran and want to stay overnight, don’t miss our recommendations for places to stay on Arran at the end of this post.

(For another day trip from Glasgow using public transportation, see our post: Loch Lomond: Visiting the Scottish Highlands by Train.)

There are various trains that go from Glasgow Central Station to Ardrossan Harbour, where the ferry to Brodick on the Isle of Arran departs from. This handy chart lists the train times lining up with the ferry times so you can plan your journey accordingly.

The train from Glasgow to Ardrossan takes about an hour and the ferry (7.50 return) takes another hour. While two hours on each end may seem like a lot for a day trip, it’s all part of the journey. The ferry itself especially is part of the experience of visiting the island. Just make sure you catch the last ferry back unless you plan to stay overnight!

If you have (or rent) a car, you can take your car on the ferry and drive around the island that way. While we enjoyed biking and we met another couple on the ferry back that had visited the island solely via bus, a car would be the most flexible option. But gas up before you head over – gas is expensive on the island.

The ferry was an adventure itself.

Up top, there’s the main floor with a bar (of course), cafe and restaurant with an assortment of vegetarian options and a couple vegan options. Despite not being interested what they had on offer, it was still impressive nonetheless. This wasn’t part of some huge sightseeing company or Disneyland. It was the mainland ferry to an island and they offered vegetarian breakfast sausages.

We shouldn’t have been surprised, after all, Glasgow was incredibly vegan-friendly (read our Glasgow vegan guide for more of the delicious plant-based food in the city).

Things to Do on the Isle of Arran

Though the island is small, it is mighty! There is no shortage of things to do on a day trip to the isle of Arran, and in fact you won’t be able to fit everything in during just one day. If you only have a day, pick the couple of choice activities and focus on those. Here are some highlights:

The Arran Heritage Museum is an open-air museum with a variety of traditional houses exhibiting traditional life on the island. They often have special events so check their calendar! The nearby Brodick Castle dates from the 13th century and is a National Trust listed building. It’s also on the 20-pound notes printed in Scotland.

While we didn’t go on our trip, Isle of Arran Distillers is located in the northern town of Lochranza (see below for more to do there) and well worth a visit if you are a whisky fan. The distillery is one of the major attractions on the island and one of the island’s major industries.

You can take a 45-minute tour every hour, on the hour, from 10 am – 4 pm, including a couple of tastings of Scottish whisky made from purified water from the island itself.

If you’re not as much into whisky but more into the hops, check out the Arran Brewery.

Cycling on the Isle of Arran

The people we were house sitting for generously lent us their bikes to use. I had read that the Isle of Arran is a cycling destination, what I didn’t realize was that “cycling destination” meant more for the people that suit up to go biking in sponsored spandex gear and specialized shoes.

I’ll fully admit that I underestimated the mountains on Arran.

If you do decide to try cycling on the Isle of Arran though, the Arran Bike Club’s website has detailed descriptions of many routes as well as recommended experience levels for each.

One main road runs along the perimeter of the island. We opted for a 30 mile (15 up and back) trip, so we could see the old castle in the town of Lochranza. The route passes by beachy spots, long stretches of road with sheepies and goats, along with little villages, each with their own accompanying shops and restaurants.

Before reaching Lochranza, you pass through a big uphill section of Highland high hills and mountains, covered with more sheepsies. If you plan on ascending this incline, a local worker on lunch break suggests getting a motor.

Lochranza was our middle-point for our bike tour. We had planned to keep going and cut across the island on a road further south, but we didn’t want to bite off more than we could chew, and we wanted to relax a bit in this beautiful seaside town.

Lochranza is a small village (population 200) on the northern tip of Isle of Arran. It’s allegedly the village with the least amount of sunshine hours in the UK, due to its location in a glen. Lochranza is also not as popular among tourists as other towns like Brodick. It retains more of a sleepy vibe, which we very much enjoyed!

Sir Walter Scott wrote the following poem about the village:

On fair Lochranza streamed the early day,
Thin wreaths of cottage smoke are upward curl’d
From the lone hamlet, which her inland bay
And circling mountains sever from the world.

Lochranza castle no longer has a roof and only parts of the walls. You can visit for free, and there are a few explanatory plaques. It’s said to be a medieval (13th-14th century) hall house that was then remodeled in the 16th century. It was used as a hunting lodge and then a base in various wars and skirmishes. The castle was abandoned in the 18th century and subsequently became the landmark that it is today.

The only occupants when we visited were wily islander children, taking full advantage of the defensive upper hand against rival tribes. 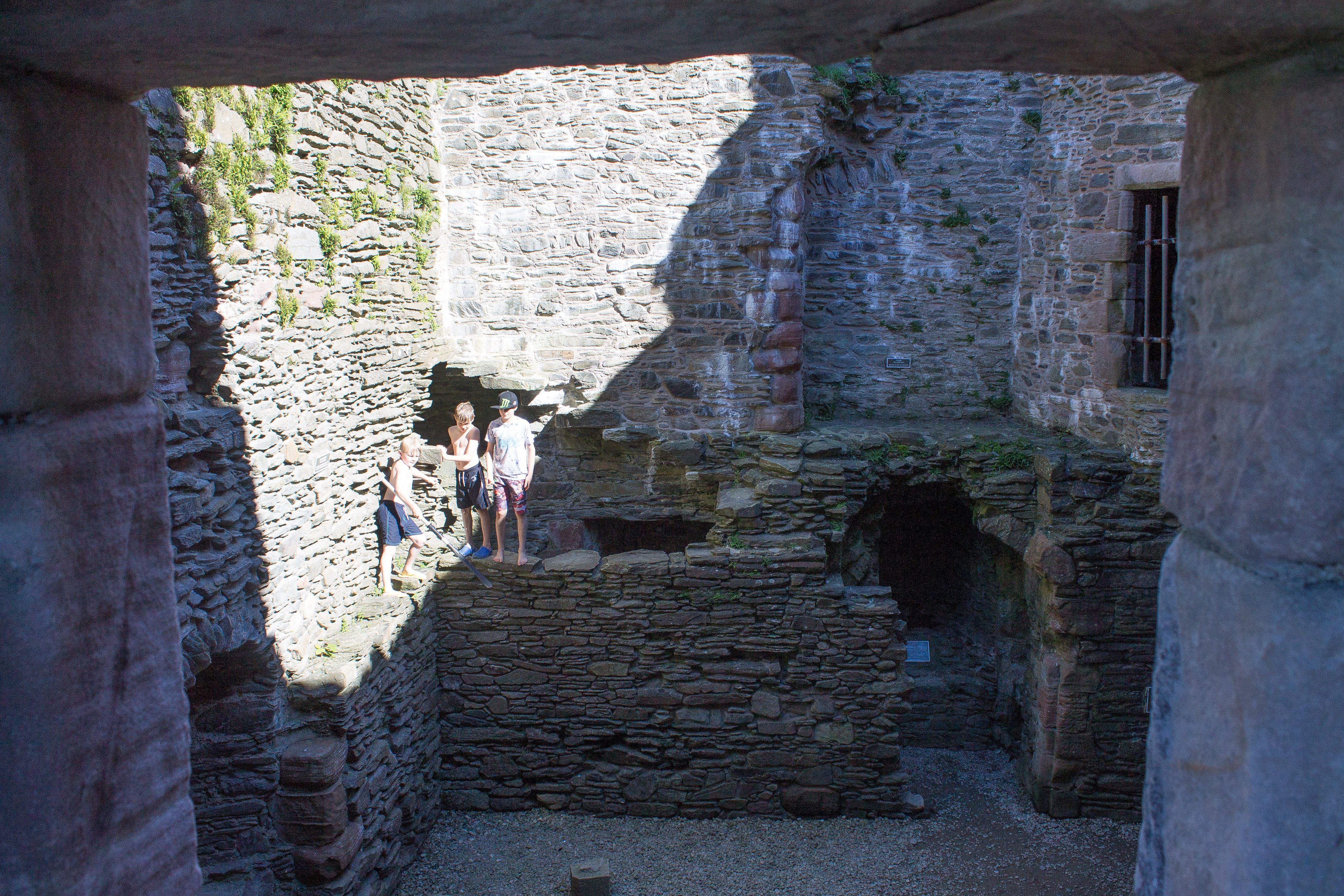 After exploring the castle, we enjoyed our picnic lunch of assembled sandwiches as we stretched our legs.

A castle, mountains, and a waterfront for a lunchtime view?

FYI: if you’re coming from the Highlands, the Lochranza ferry goes directly from Claonaig to Lochranza in 30 minutes. Click here for their summer timetables (this ferry is much more limited in the winter, and only runs once a day October-March).

While you can get a good feel for Arran in a day, staying overnight gives the immersive experience of falling asleep and waking up on an island. There are plenty of BnBs and small hotels to choose from, but if you’re traveling in the high season, it’s best to book in advance.

Here’s a selection of Isle of Arran accommodation in the main towns (all veg friendly):

Brodick is the gateway to Arran as the town where the ferry from Ardrossan Harbour on the mainland stops. It’s a pretty large town with everything an info center, grocery store, shops, restaurants, and places to stay, all lined up along the waterfront.

Belvedere Guest House – historic house and BnB and they make their own homemade veggie sausages for breakfast!

With a whopping 1000 residents, Lamlash is the largest village on Arran. It’s just a few miles south of Brodick.

Stonewater House Bed and Breakfast – Cozy Bnb that makes their own vegan haggis! Full vegan/vegetarian breakfast on offer as well. They don’t accept kids at the BnB so if you’re looking for an extra quiet spot this is your place.

There are plenty of other places to stay, this is just a sampling. For more Isle of Arran accommodation click here or use the following search box.

Things to Do in Glasgow

An Unexpected Adventure in Bucharest