Day Trip to Toledo: A City Steeped in History

Everyone will tell you where you need to visit and what to do while you’re in Spain. Ogle Gaudi architecture in Barcelona, experience Semana Santa processions in Sevilla, and procure paella in Valencia, at the very least. Not that these aren´t worth doing – just that they all share one thing – they’re always recommended to us by foreigners.

When we ask (or even when we don’t), the citizens of Spain are very proud to share their recommendations. These invariably include: see the ancient Roman aqueduct at Segovia, visit the Alhambra – the last Moorish stronghold in Granada, and experience the city of three cultures, Toledo! 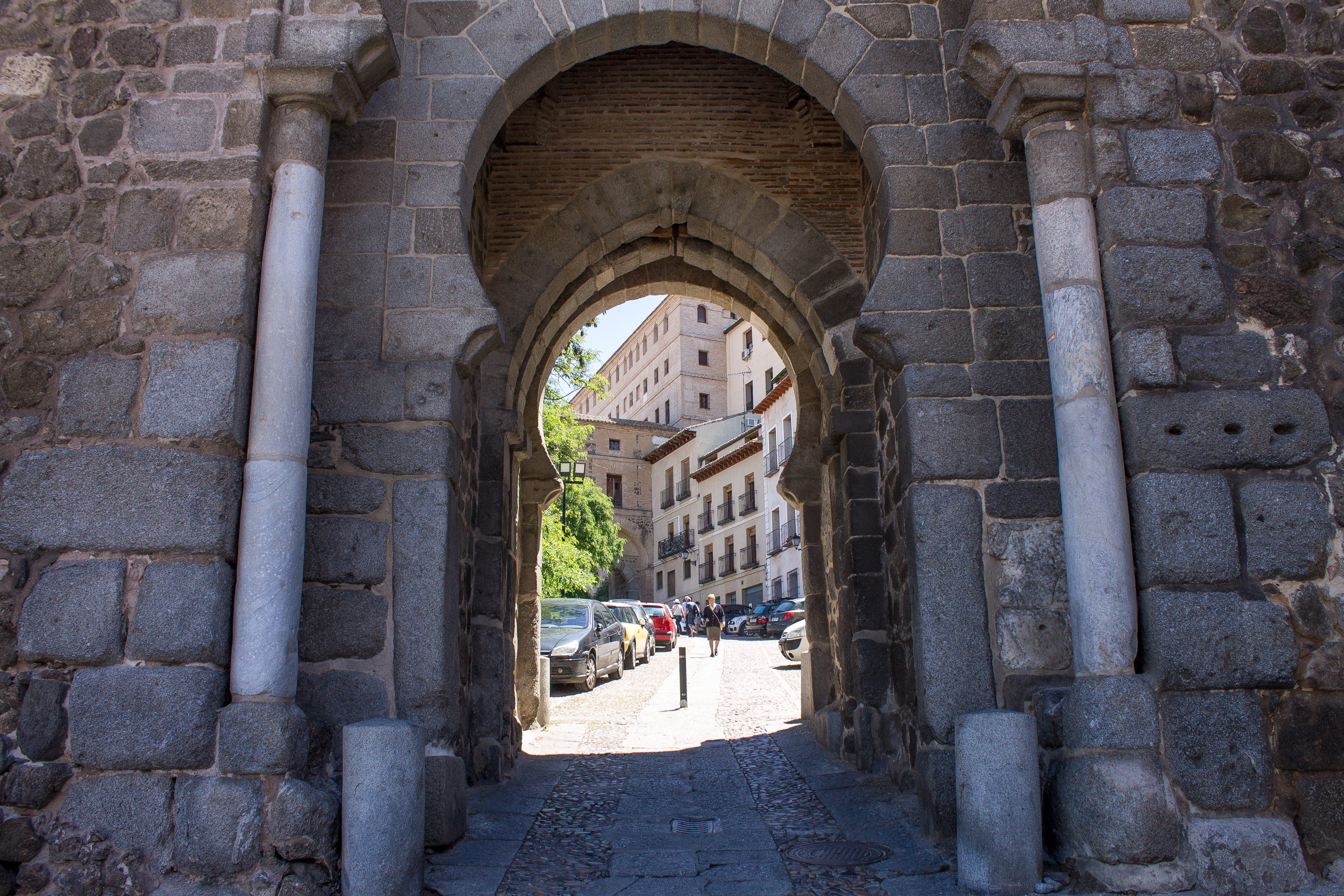 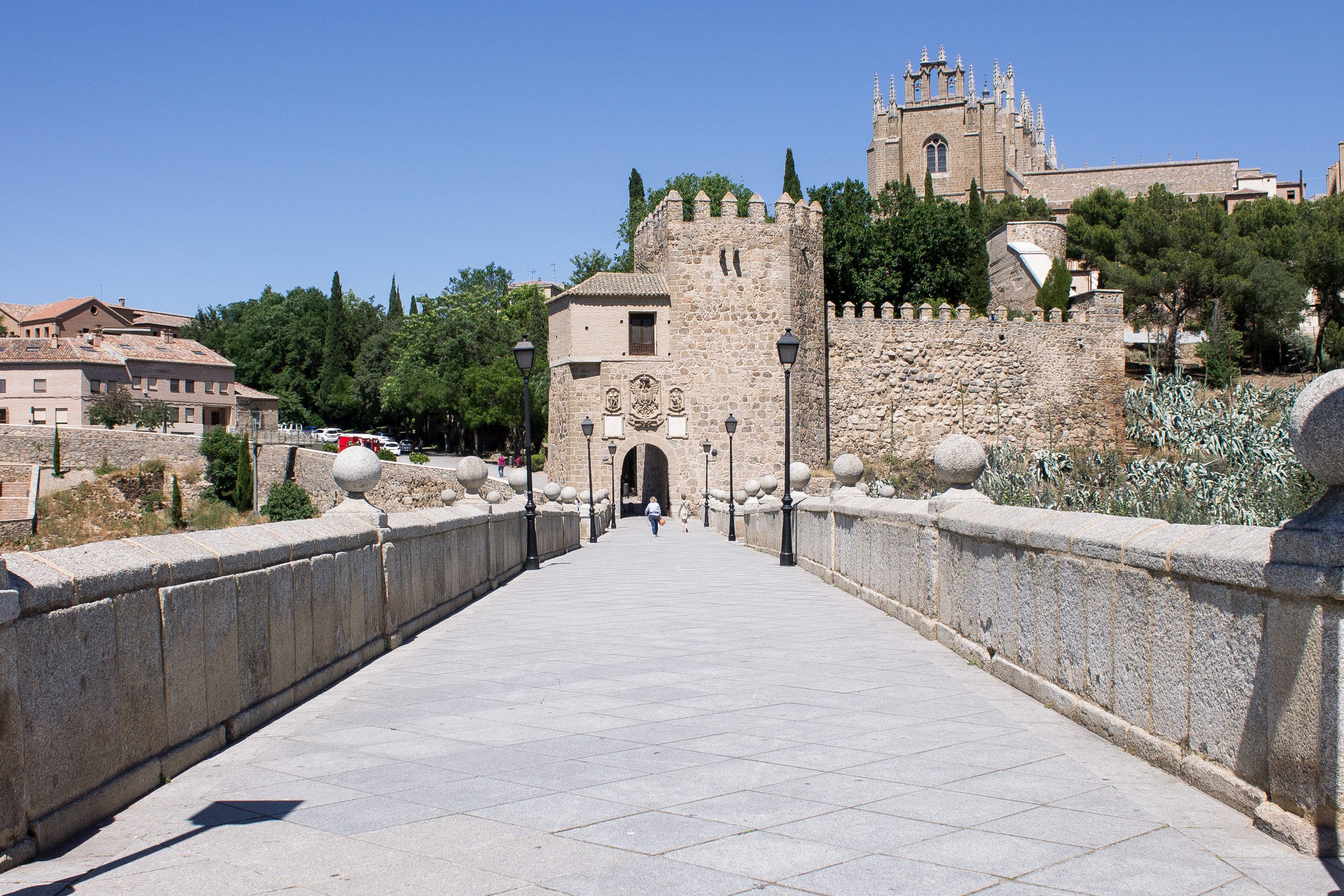 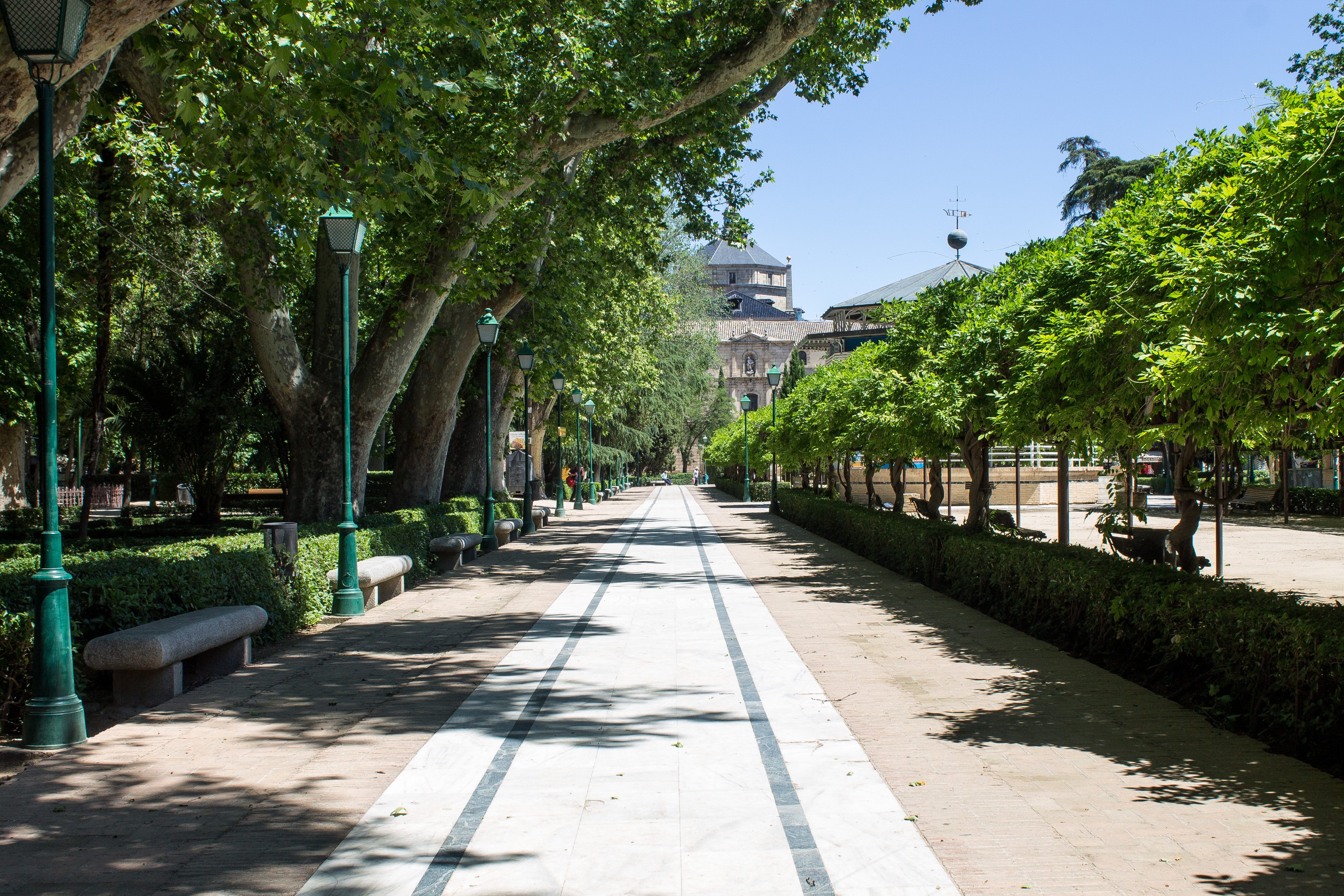 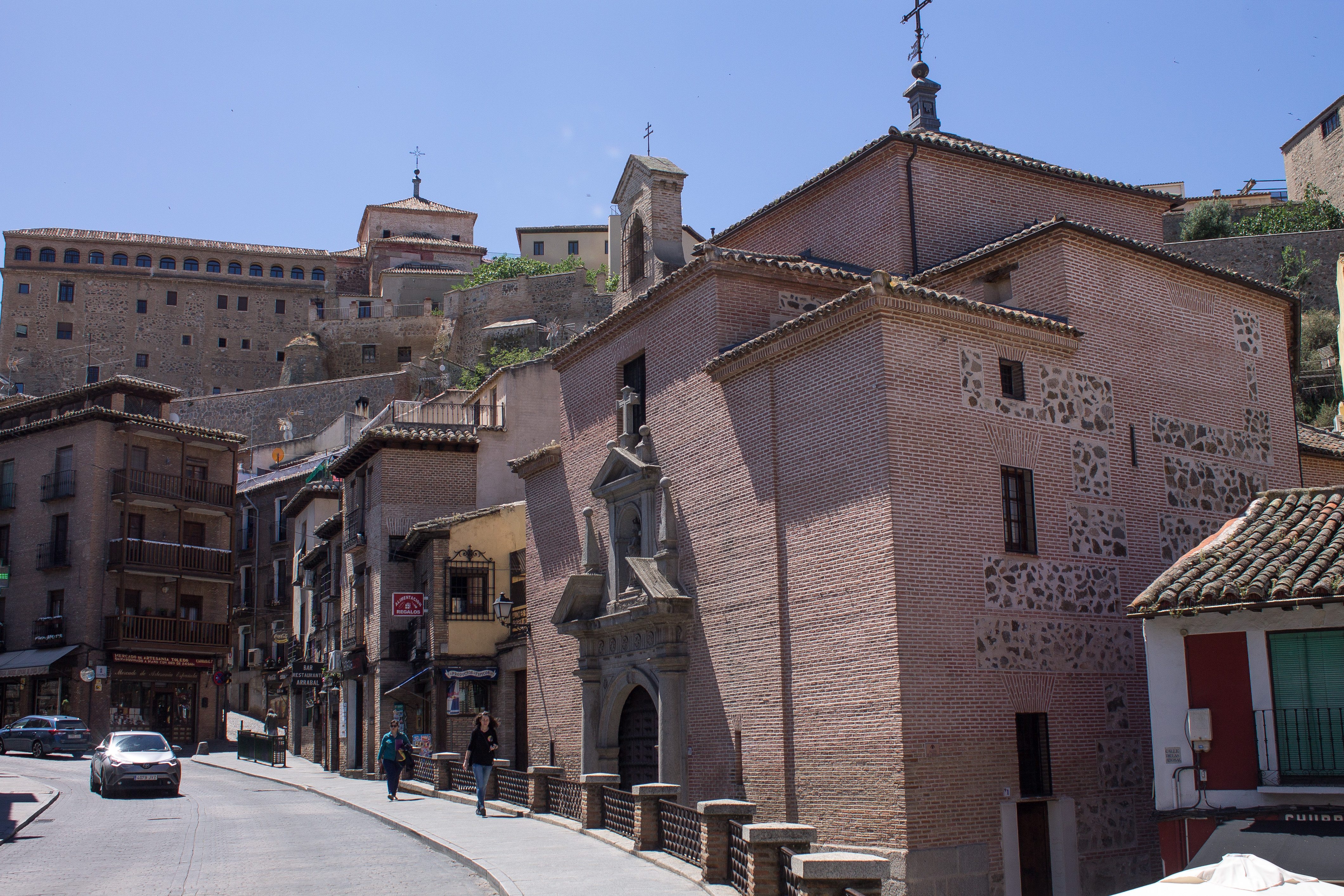 Three cultures you say? What’s that about?

Toledo represents three groups – Christians, Jews, Muslims – that remained and mostly coexisted peacefully from the 8th century through to 1492. That year, the new Catholic ruling body started expelling Jews and Muslims left and right. If you’re interested in this time period in history, the book Ornament of the World: How Muslims, Jews and Christians Created a Culture of Tolerance in Medieval Spain is a fantastic and enjoyable read.

Toledo was the Visigothic capital from the middle of the 6th century until their defeat by the Moors in 711. The horseshoe arch is more typically known as  “Moorish arch” from Islamic architecture. However, the Visigoths were using the arch in Spain long before any Muslims arrived on the Iberian Peninsula. Before this turns into a history lesson (and it very well could, Sam wrote her undergrad archaeology thesis on the Visigoths) head here for a concise but informative overview of the Visigoths in Spain. 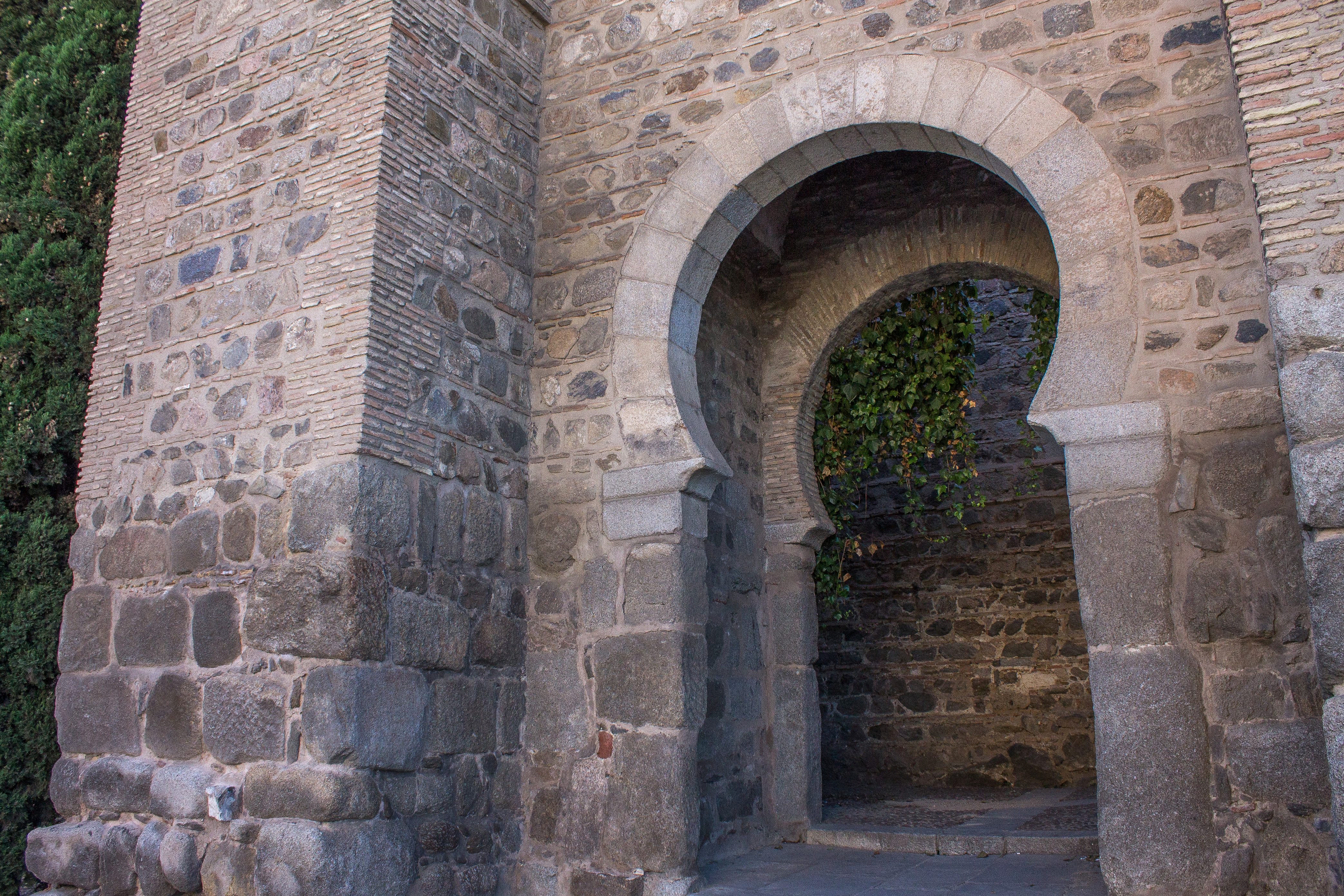 Like Segovia, Toledo sits upon a hilltop – an obvious defensive advantage to building a castle and walled city. Here you can see this upon entering. It’s hard to not be impressed by it’s intact Spanish medievalry. 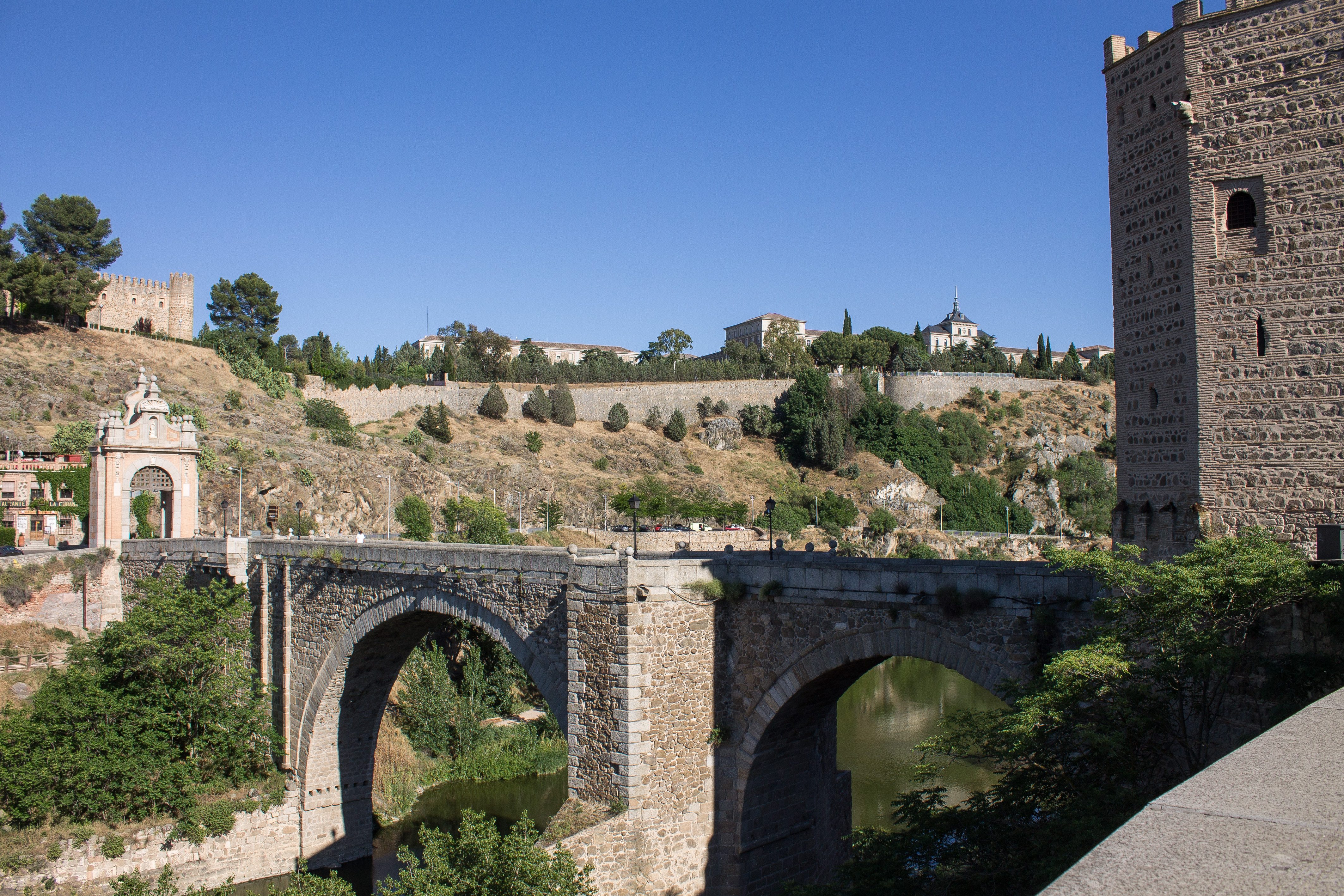 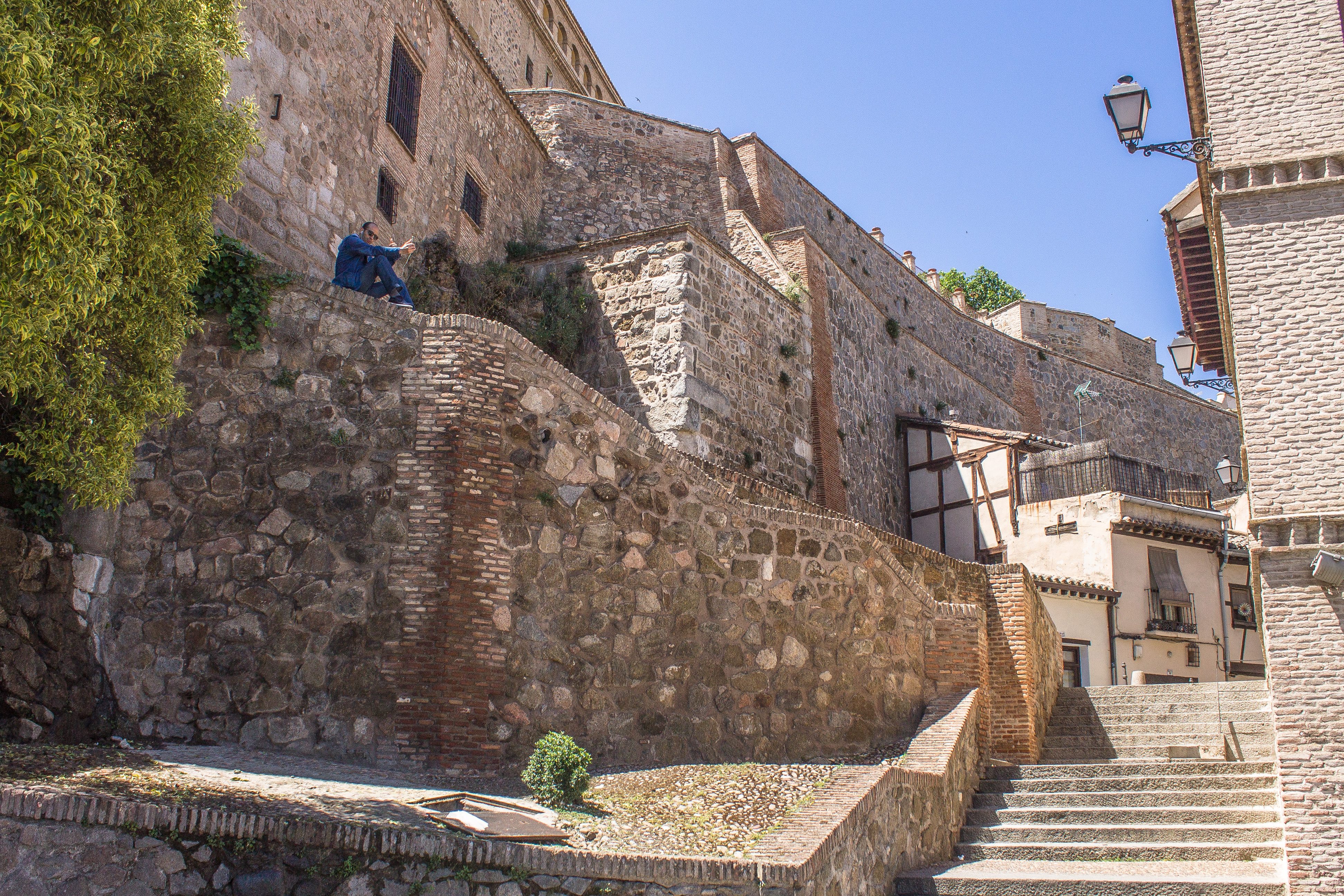 Inside you’ll find never ending winding streets that you can easily lose yourself in. 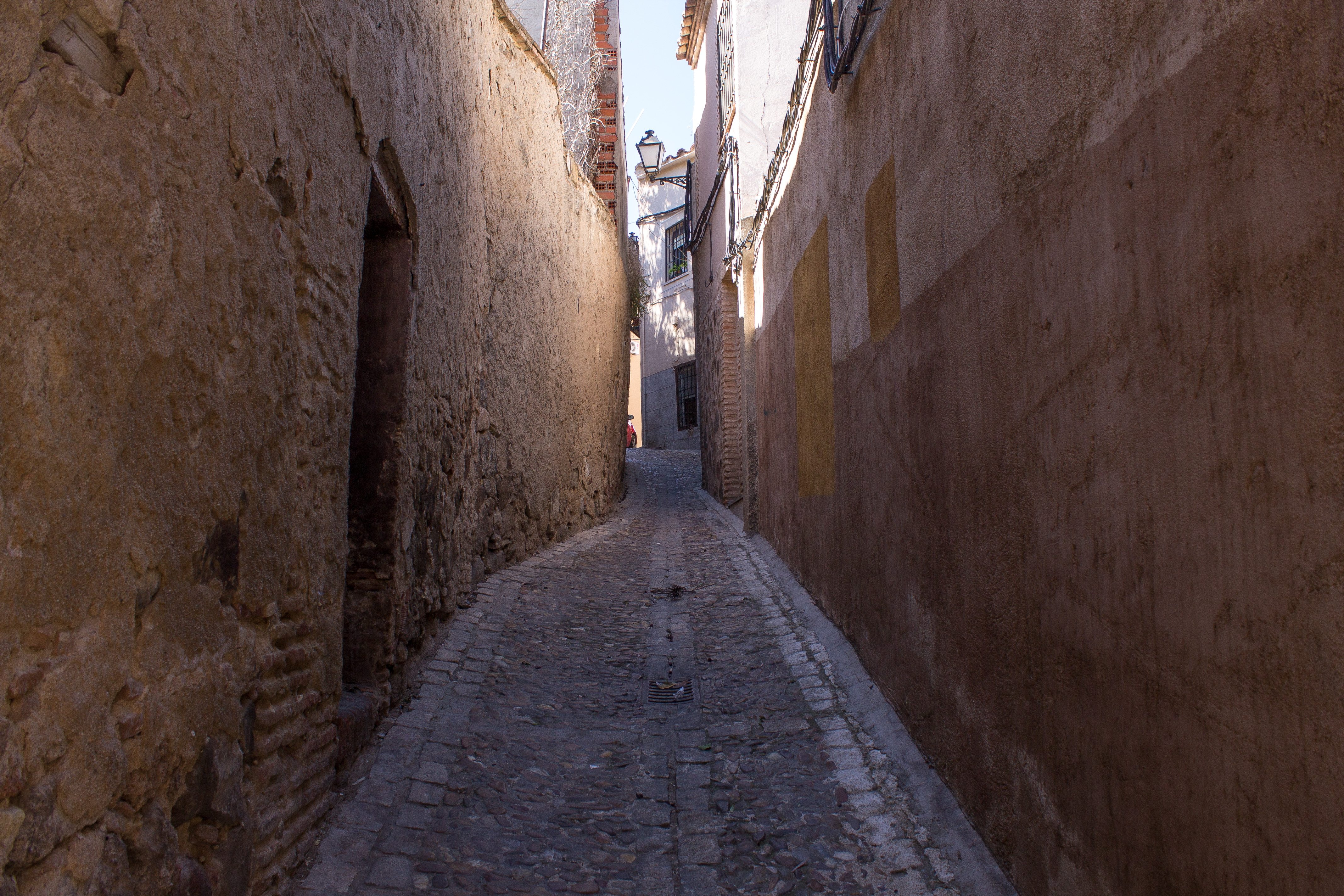 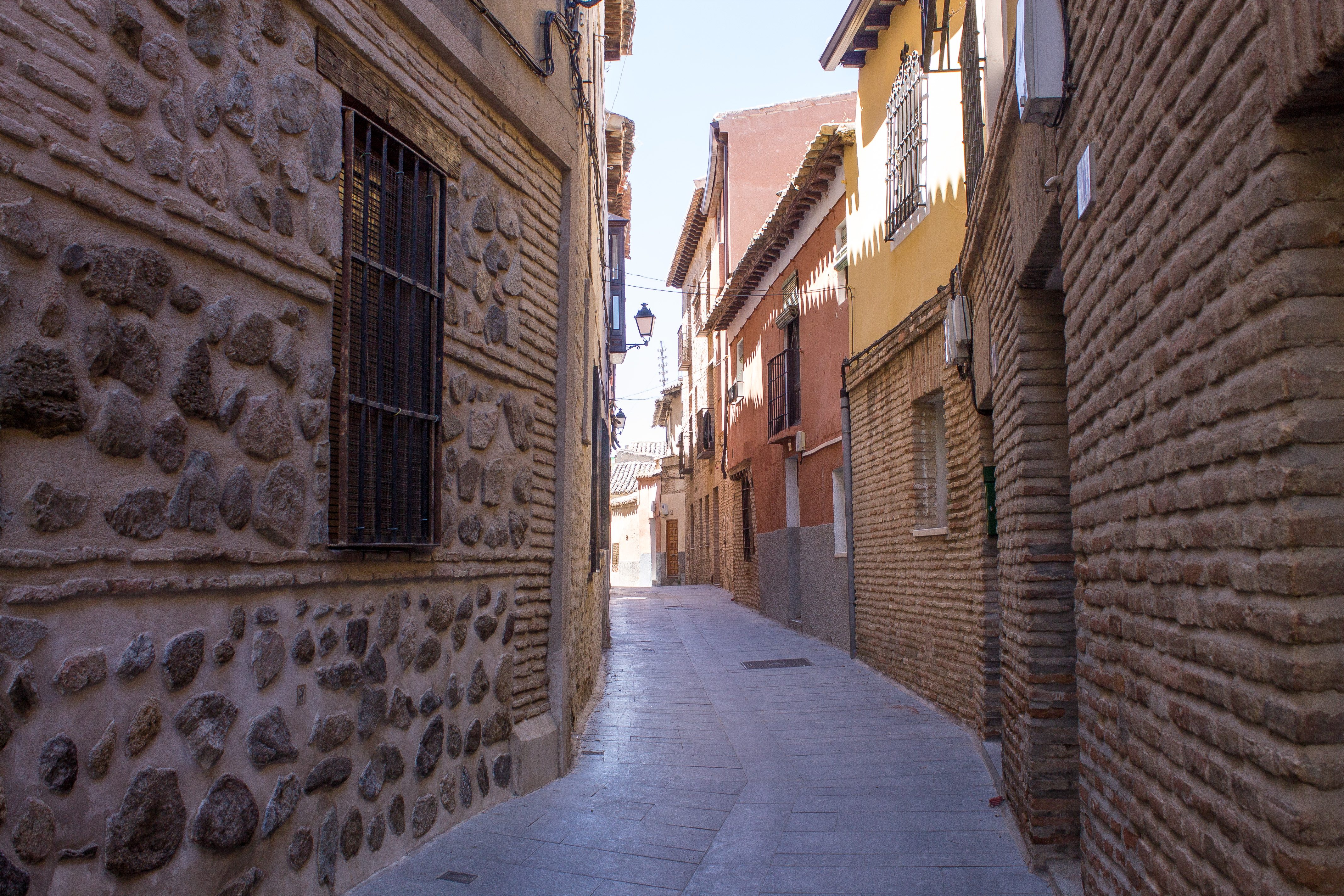 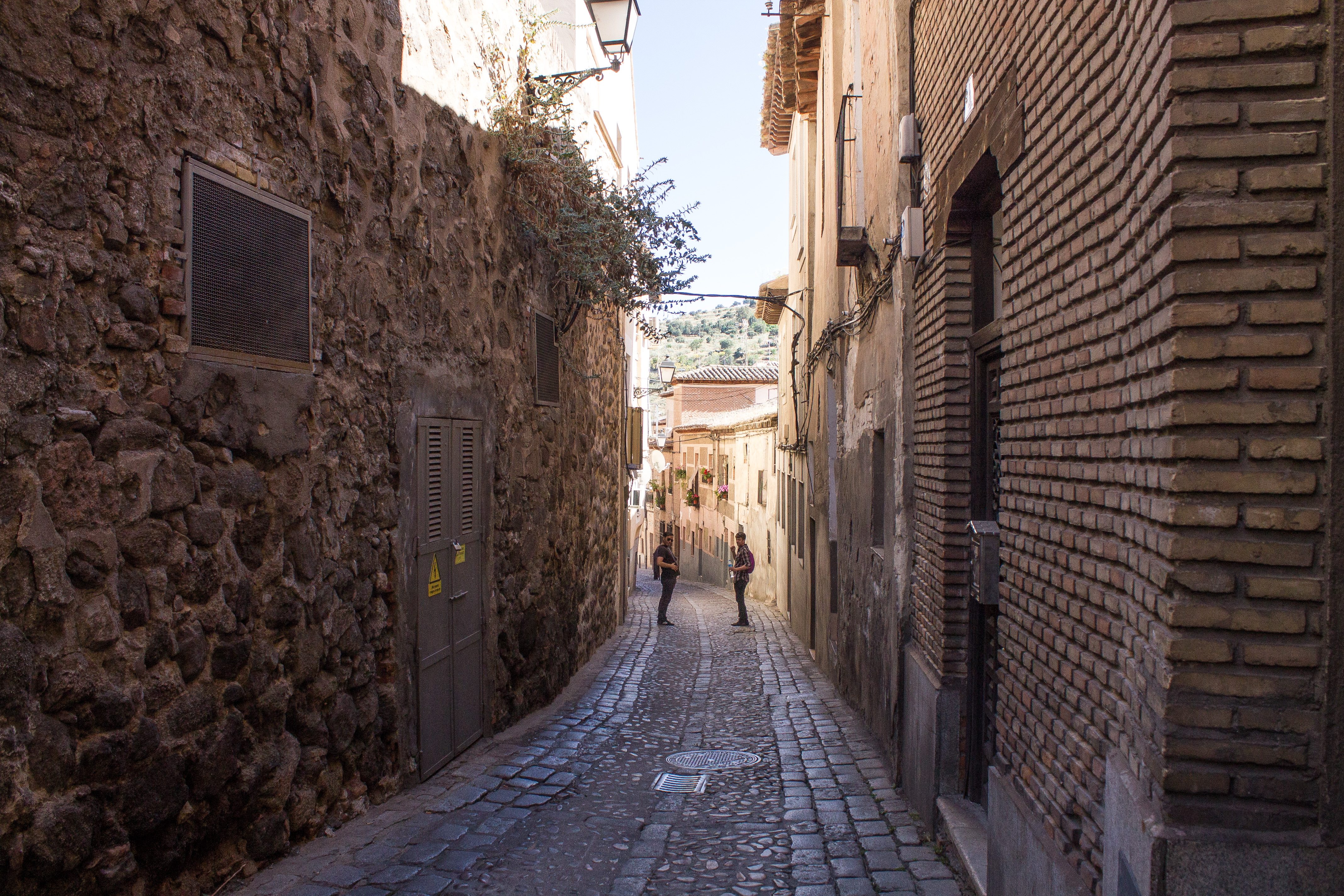 One of our favorite spots was an abandoned lot. The contrast between the crumbling Toledo and the tourist Toledo was as Stark as Ned (Sam’s pun). 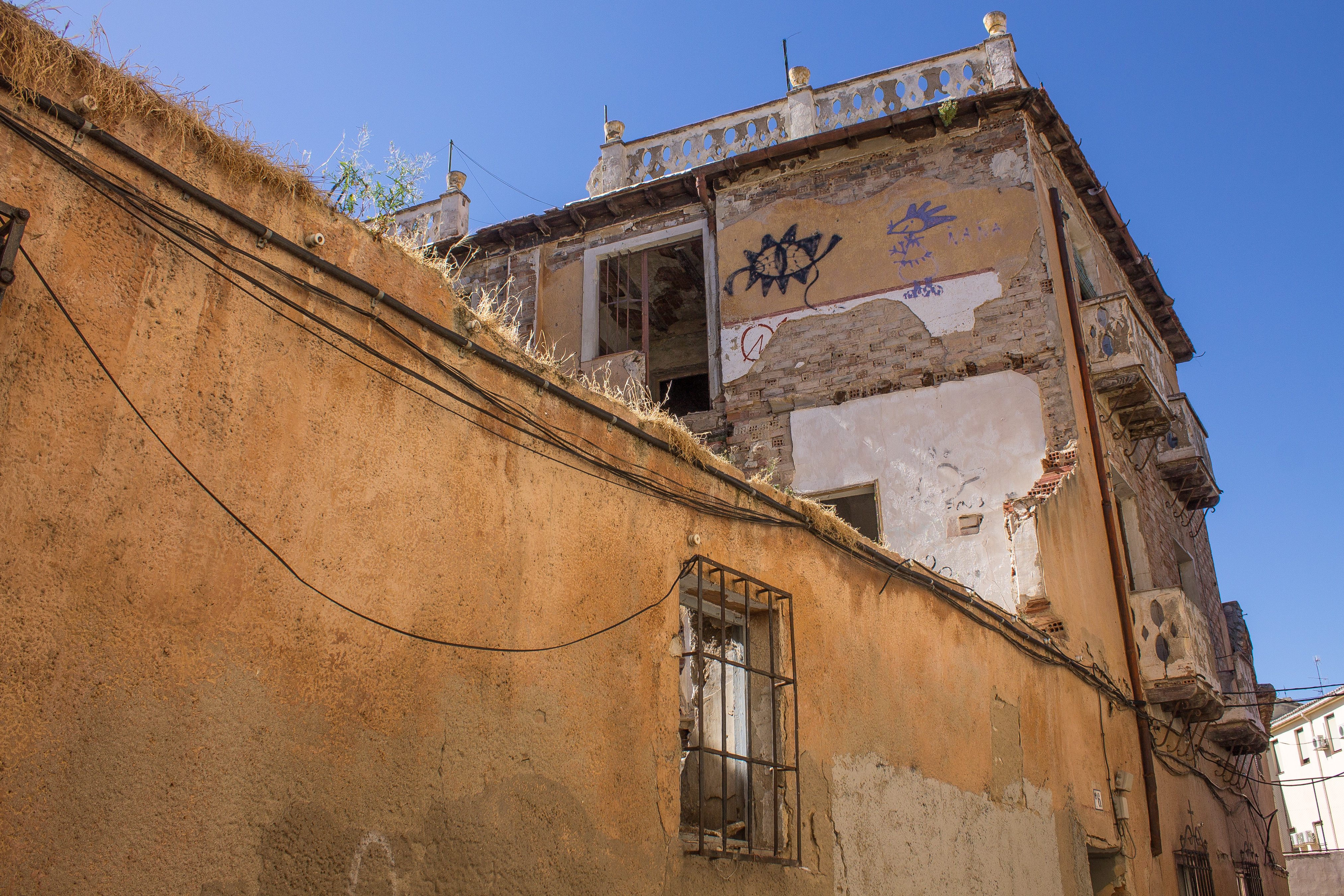 If you’re looking for your way back, it’s not too hard to round a few corners and re-find the din of tourist groups grazing the usual pre-made fanfare. Just watch the cars – these old, tiny roads aren’t meant for them, but they still come barreling down hills at ramming speed. Note the lack of space for pedestrians on either side of the car. You may have to hop into a doorway to avoid vehicular injury. 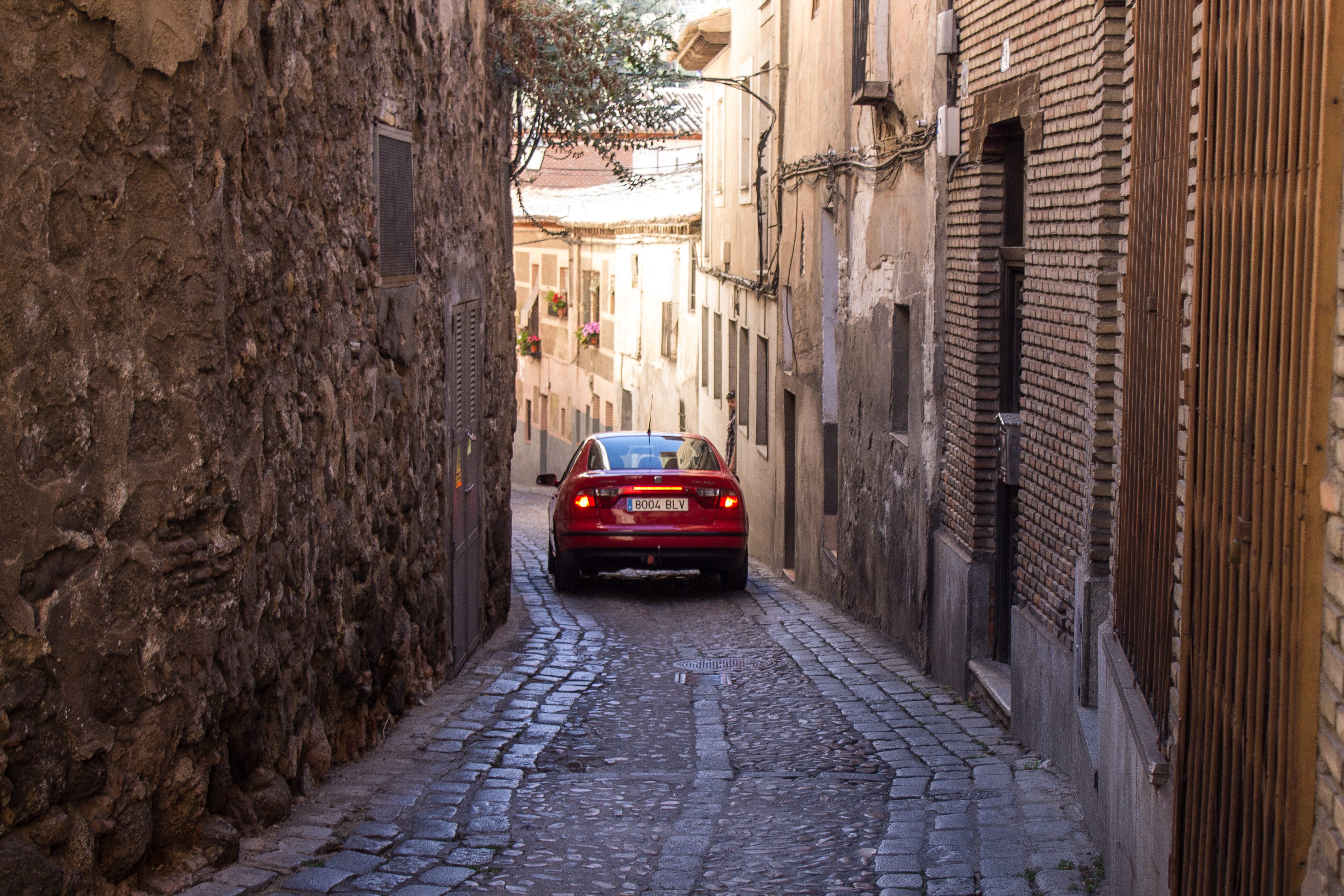 What to See in a Day Trip to Toledo

Toledo is a UNESCO World Heritage site and there are many sights to behold. While there are certainly more than a day’s worth, you can visit many of them in a day trip to Toledo.

Every city in Spain seems equipped with a cathedral, a monastery, a fortress and/or castle. After many months in Spain, we’ve seen our share of cathedrals, plus this one was over 10 euros to enter, so we passed.  (Go around the side entrance and you can go inside the cathedral into a little, caged space that lets you get an idea of the interior without paying).

Instead, we opted to see a lesser seen artifact: a synagogue.

This is allegedly the oldest extant synagogue in Europe (it dates to the 12th century). The building is a physical manifestation of the coming together of the three cultures of the city. It was built on (at the time) Christian territory by Islamic architects for the express purpose of being used as a synagogue. Today it’s a museum that you can visit for a few euros. 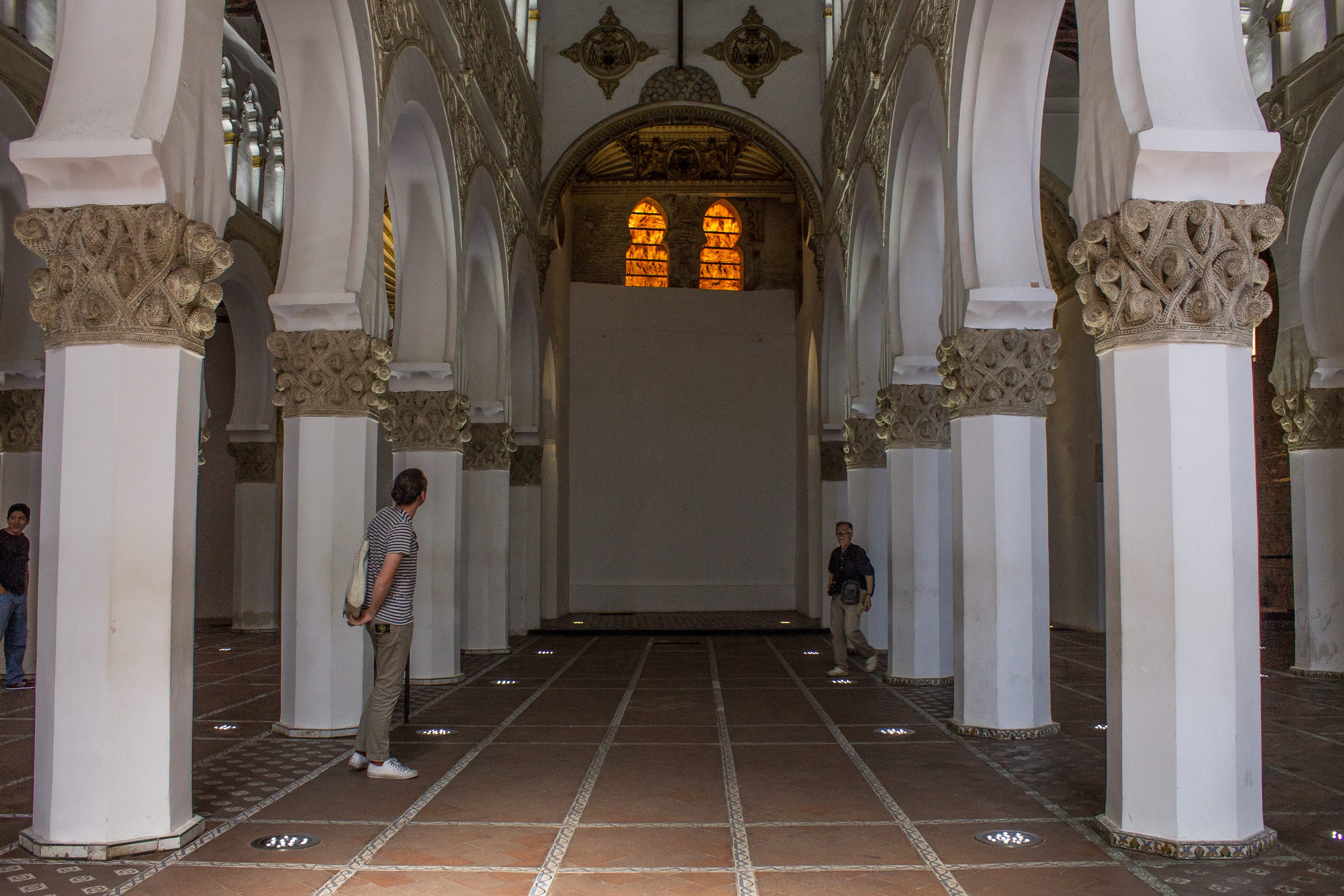 Due to the many changing over of power, the synagogue had been looted and reappropriated (it’s now owned by the Catholic Church), so no props remain and the interior is starkly empty.

At this point, the Sam became quite parched and demanded refreshments. To our immediacy was a terraza (terrace) with 50 ml bottles for a euro, but my thrift sense detected a non-tourist trap deluge of potable water afoot. After some hemming, hawing, and Sam dragging, we found a tucked away almacén with 60 cent 250 ml bottles of water for flooding our Spanish-sun-dried mouths.

The little shop with its old man proprietor behind the counter underlined the fact that while Toledo still is a touristy location, it still felt like a place where people actually live (unlike Florence). 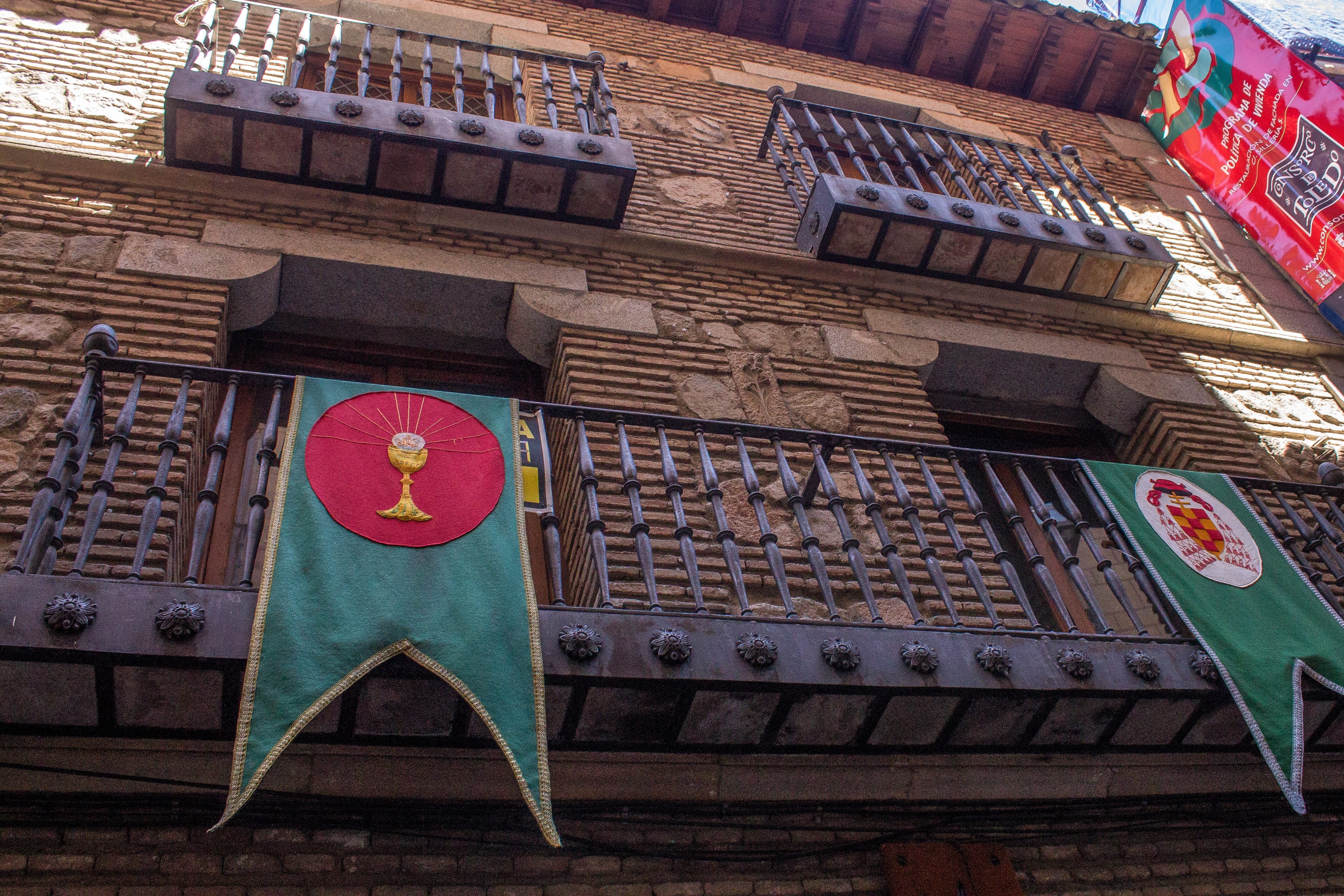 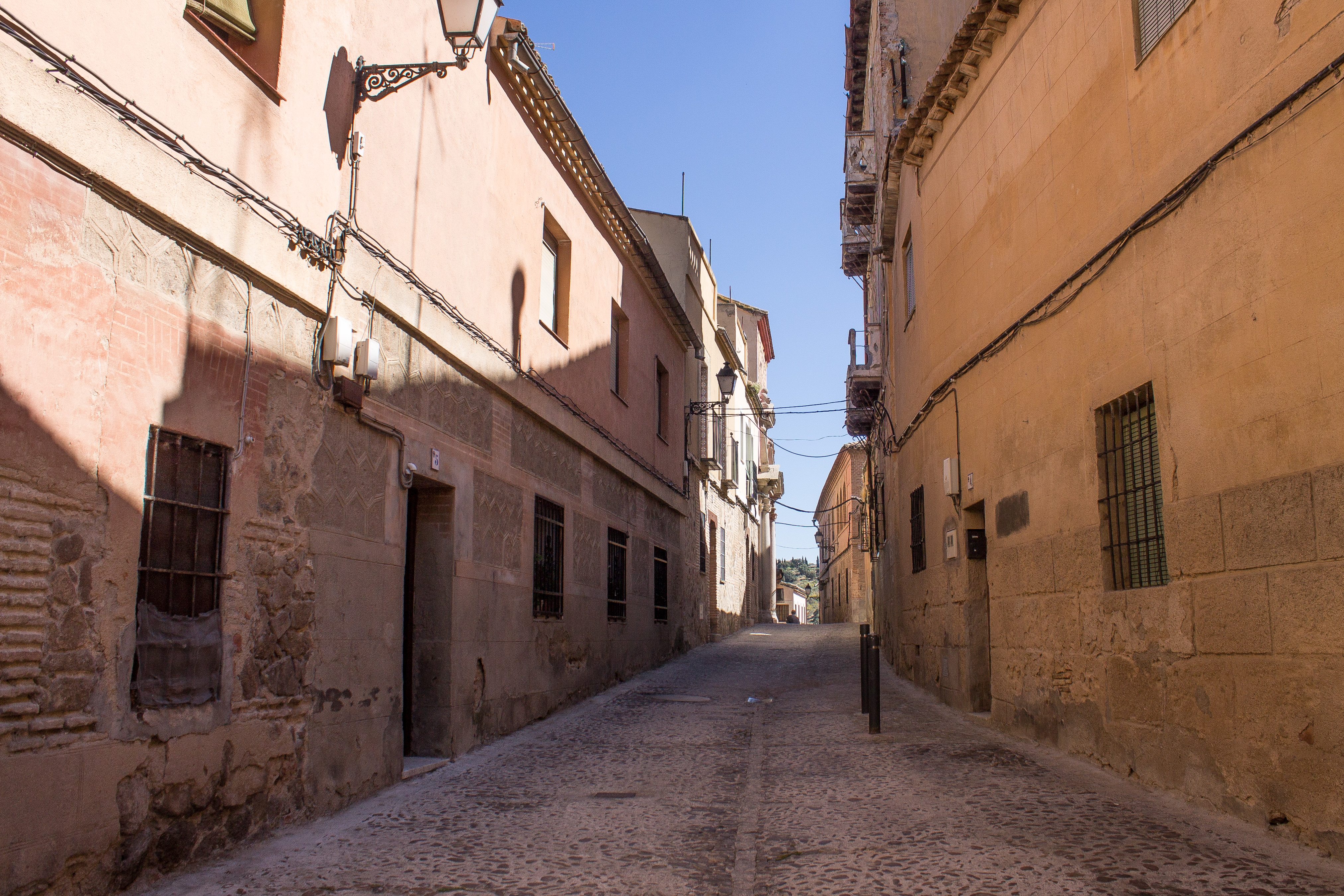 Newly refreshed, we set foot in a small church (Toledo has many). A medieval but plain exterior esconded a treasure within – the usual overly ornate and decorated Catholic altar for worship. Incredibly cool and quiet, we took refuge from the hot afternoon for a moment. After leaving, the Sam informed me that all the while we were inside, a nun with one foot in the grave (metaphorically speaking), was encased in glass (literally speaking) behind us. She was silently maintaining a vigil, ready to strike down any blasphemer with the wrath of God. I do not regret missing her – my imagination culled in childhood catechism haunts me well enough.

This medieval bridge crosses the largest river on the Iberian Peninsula – the Tagus River. The Tagus begins in the Spanish region of Aragon and goes all the way to Lisbon. At the Portuguese capital, it empties into the Atlantic.

You can stroll along the bridge (and turn back around, there isn’t much on the other side besides houses). For some more seclusion and quiet, take the riverside dirt path for a bit. The path goes all the way to Aranjuez if you feel like punishing your feet by walking 40 km in a day. 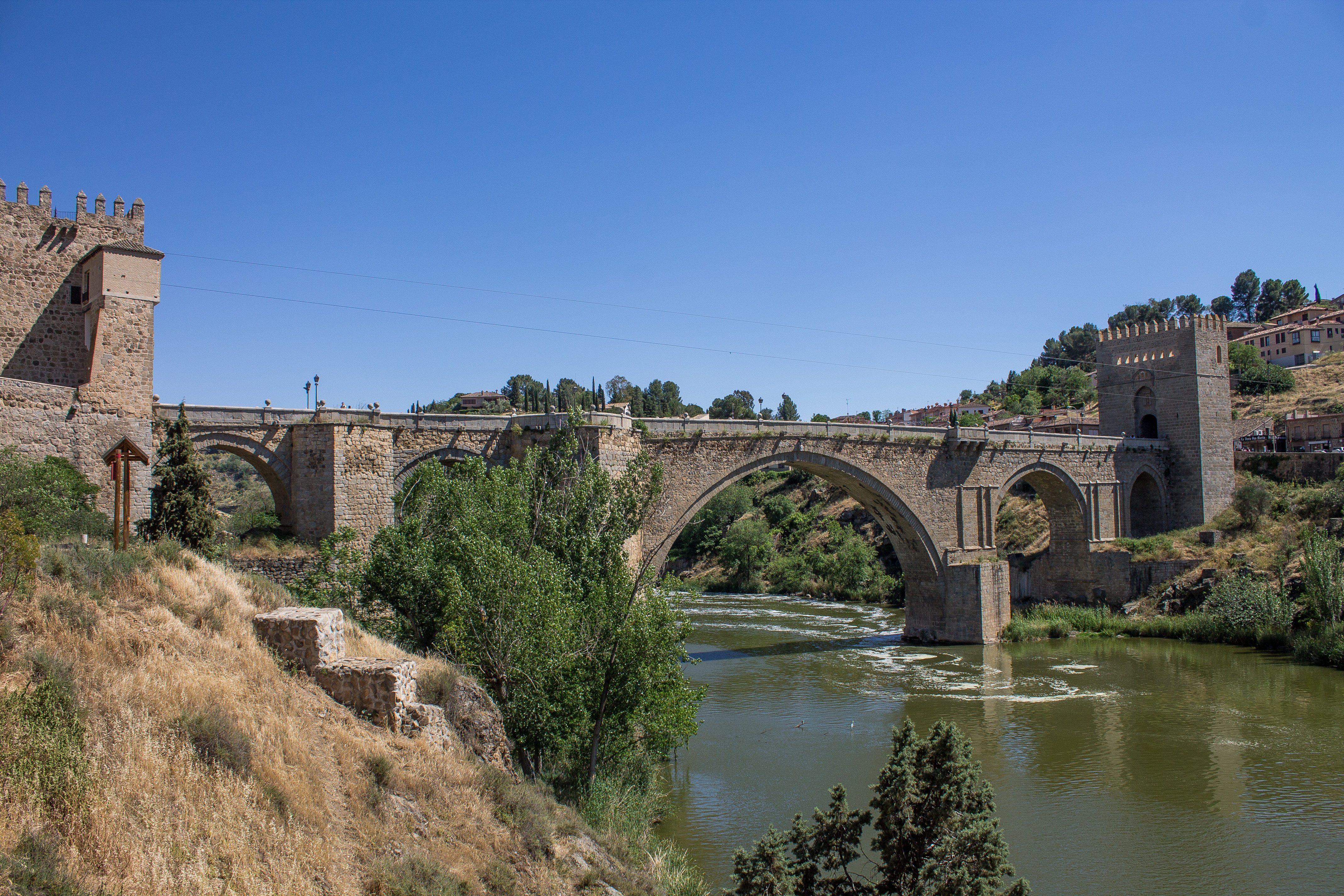 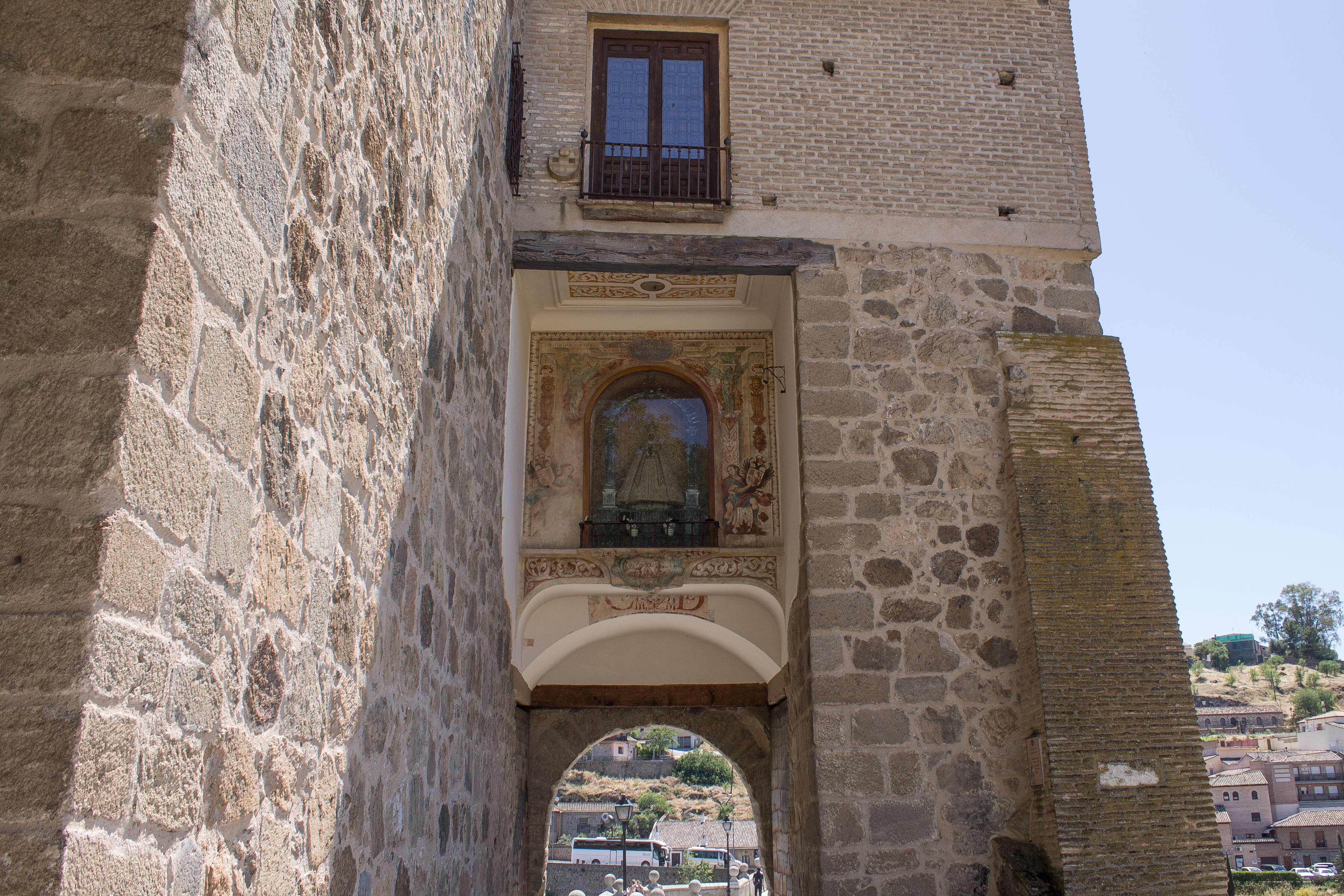 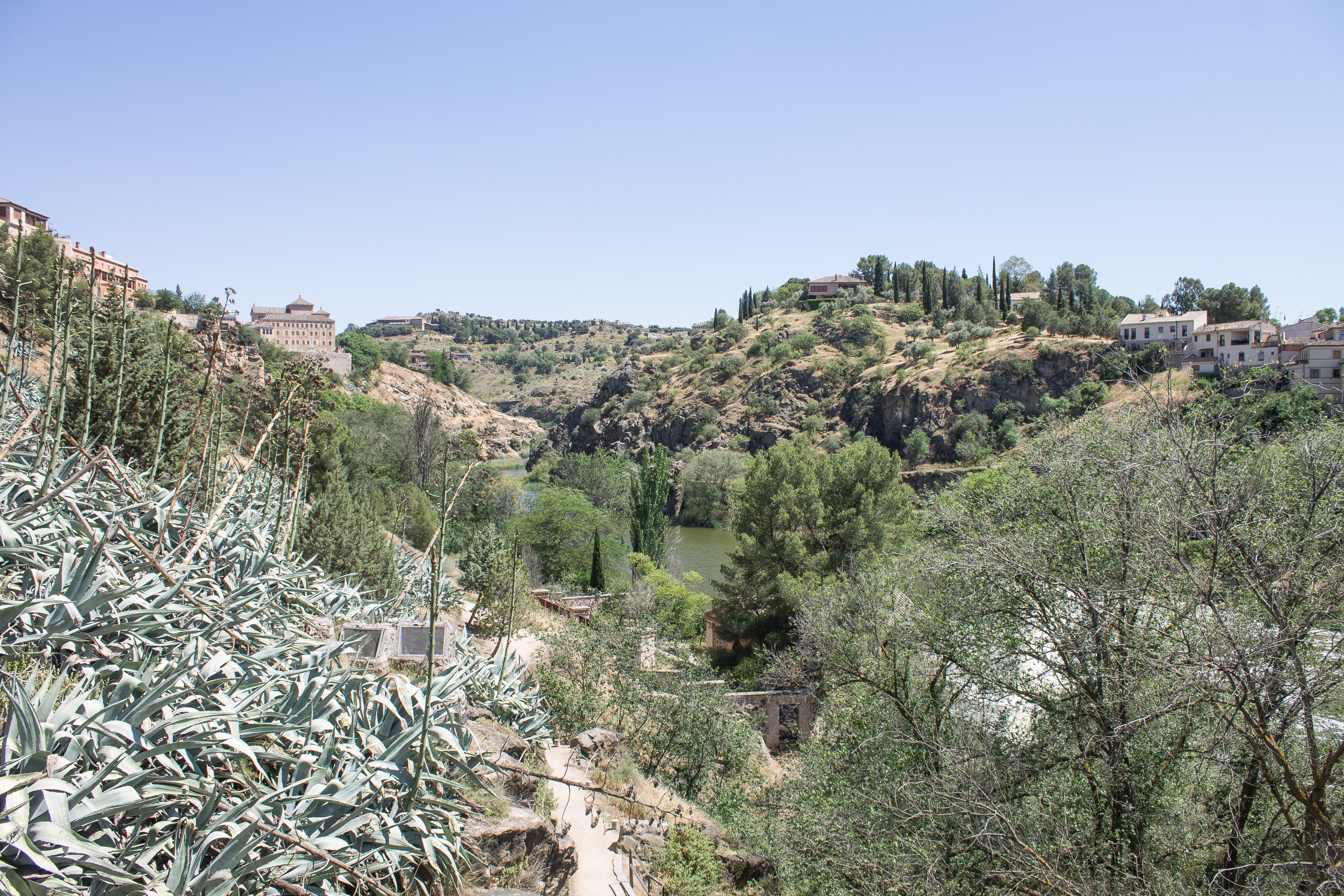 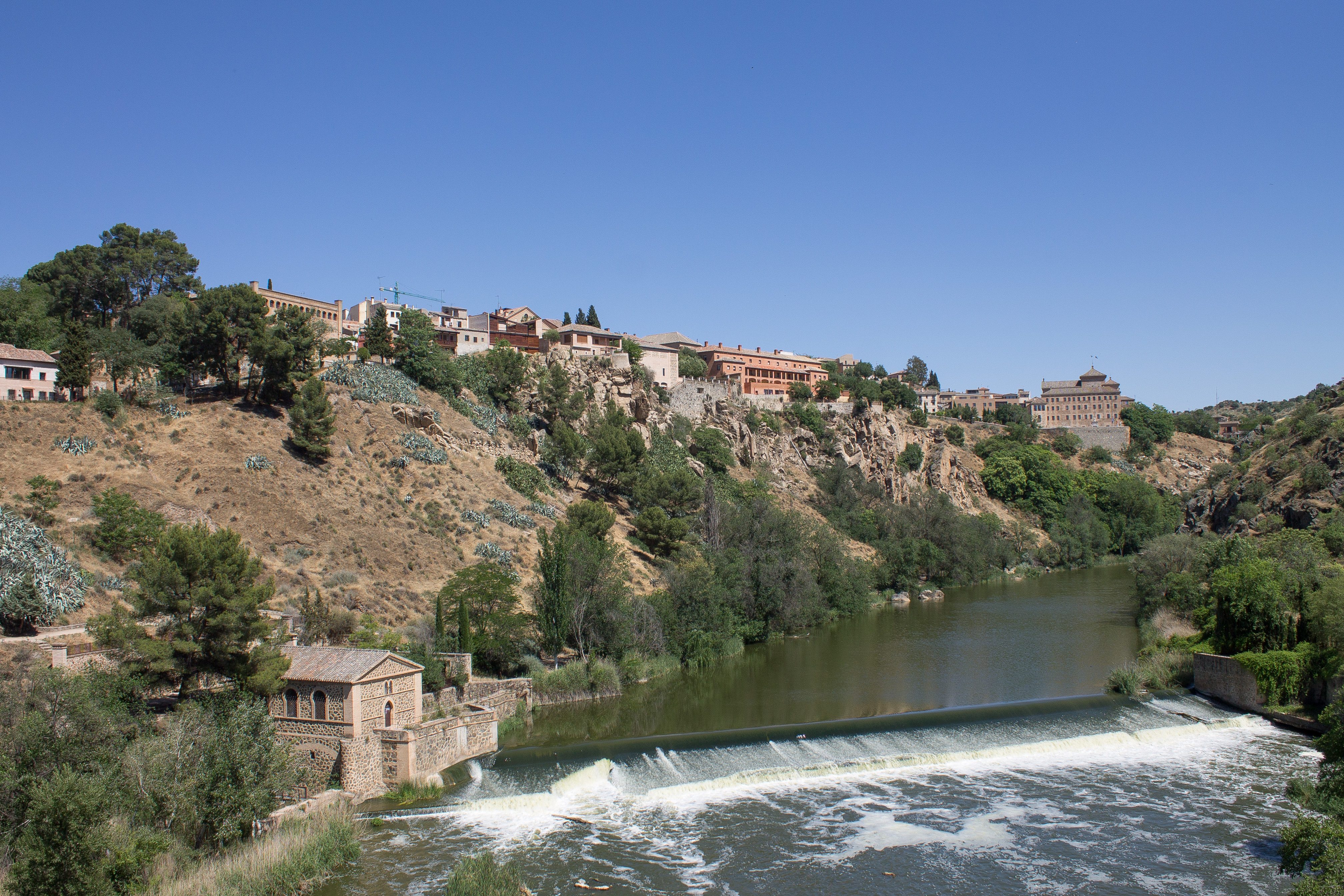 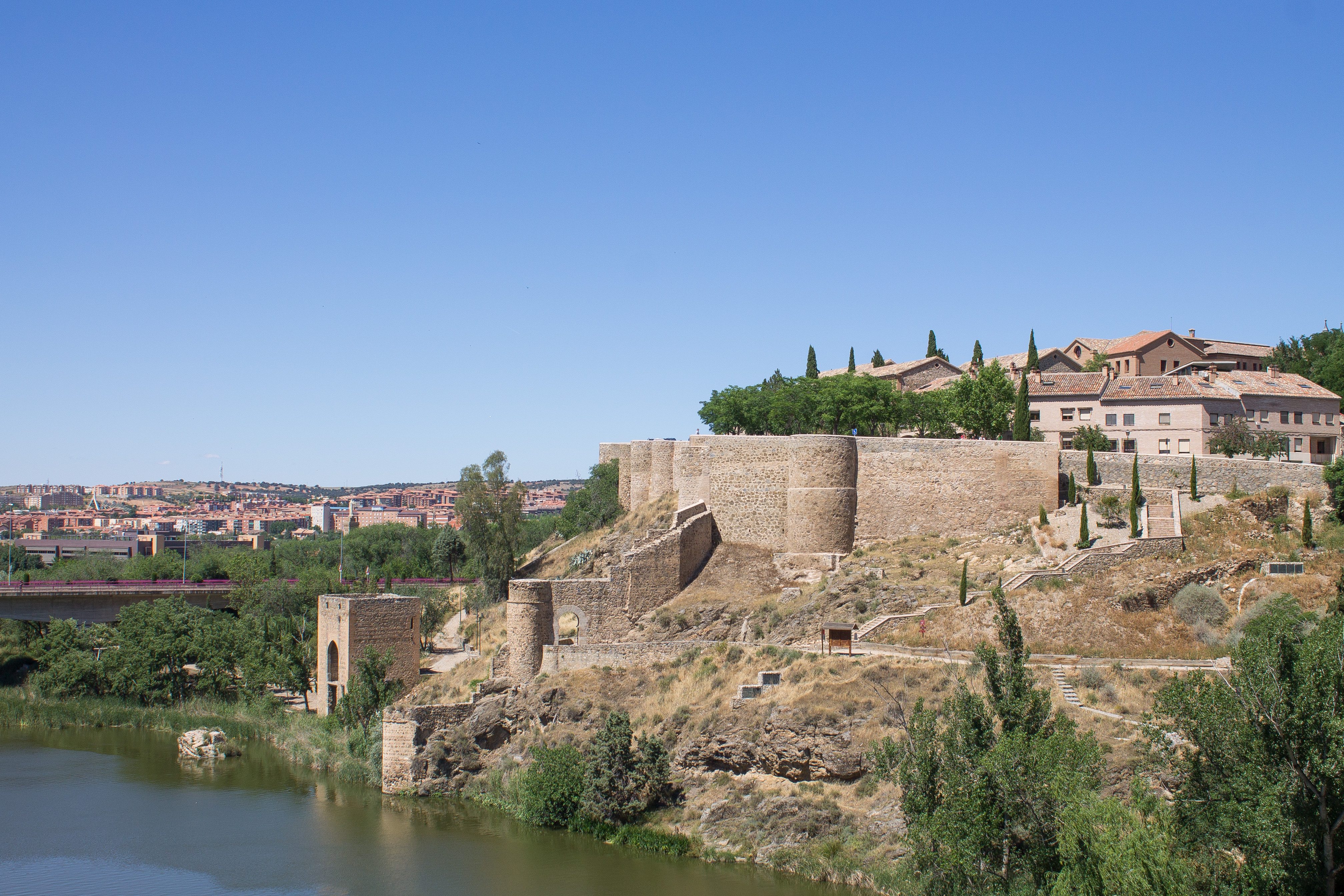 We recommend starting your day trip to Toledo in the morning. That way you can wander around and see some sites before settling in for a nice menú del día (daily lunch special).

Alcázar of Toledo – This building has quite the bloody history. First built as a Roman palace, it was the place where the king received Hernán Cortés after the conquistador’s conquest of the Aztecs. Later it was a stronghold of Franco’s army and a symbol of the Spanish Nationalists. Today it’s a military museum.

El Greco Museum – A recreation of the home of El Greco, the Greek painter who spent much of his life in Toledo. It’s now a museum.

There are countless other churches, gates, synagogues, and doors to the city – wander and you shall find them! 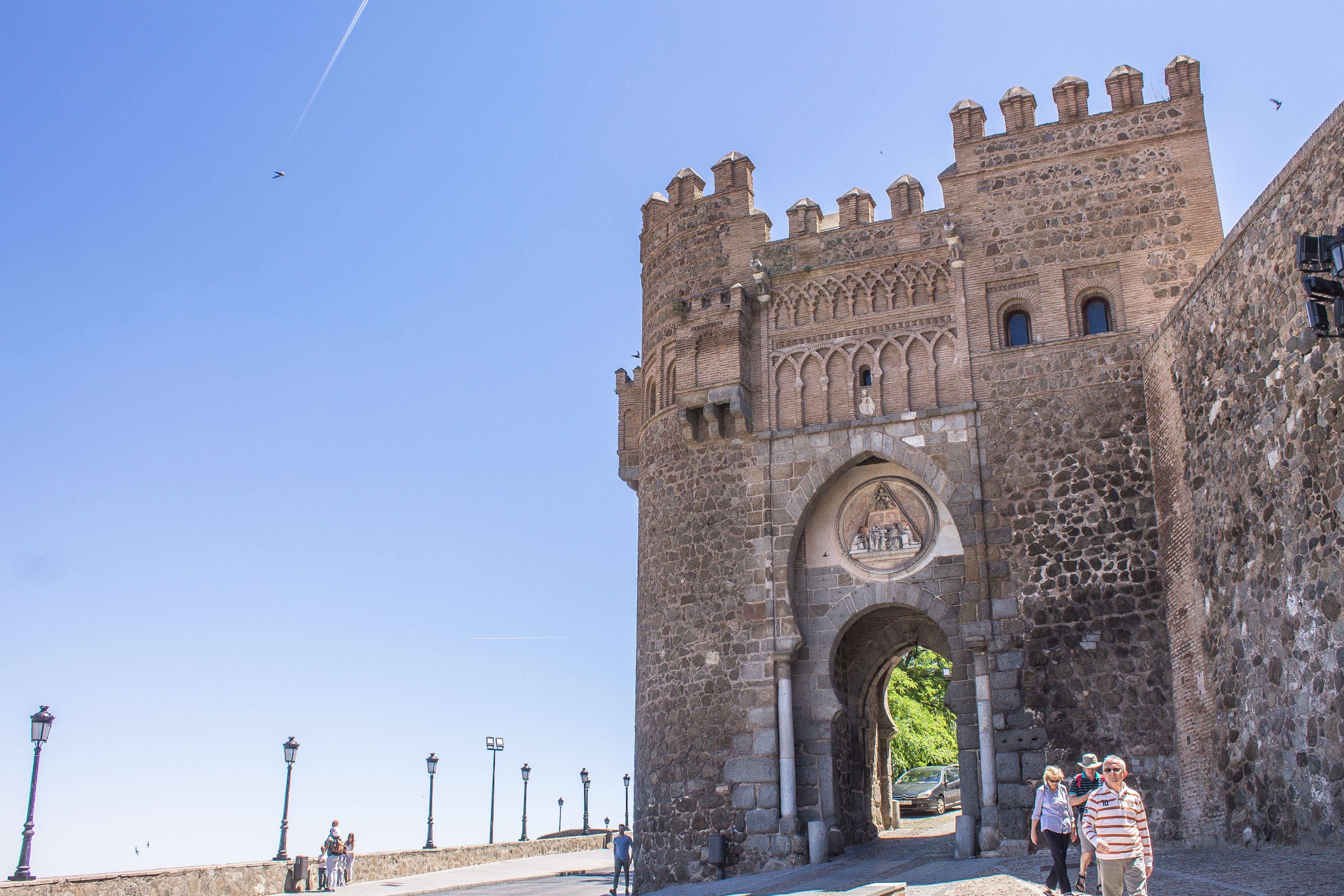 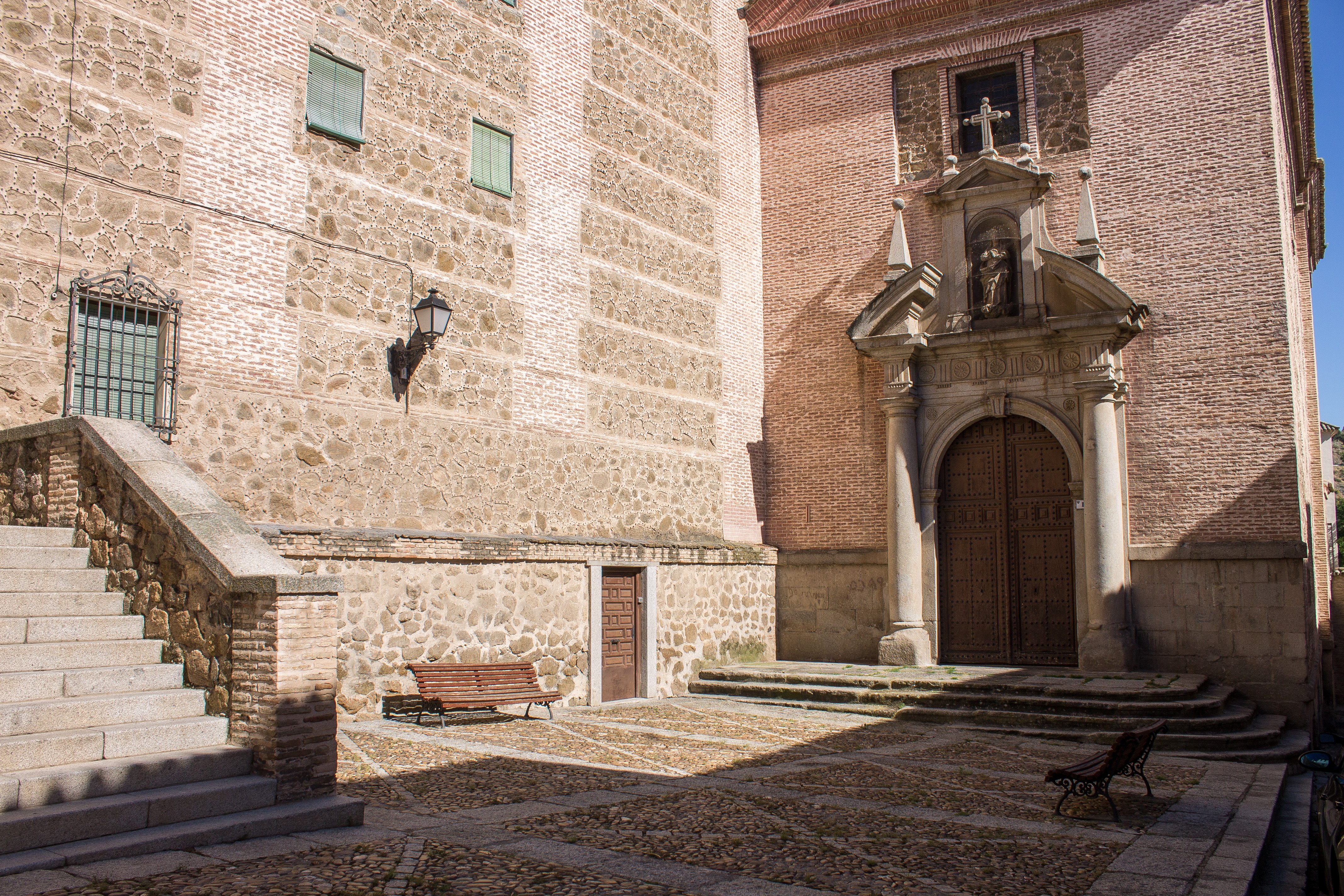 Day Trip to Toledo from Madrid – How To Get There

Bus: Our recommendation as it’s super cheap (less than 10 euros round trip) and easy. The bus leaves very frequently from the bus station at Plaza Eliptica (metro lines 6 and 11) and takes about an hour. You can check the times on the Alsa website. Most buses seem to be direct (directo) but some stop at several small towns along the way, adding 30 minutes to the journey. Double check with the driver unless you want to sit on the bus longer for no reason!

You’ll see a big line at the bus stop within the station – always expect lots of tourists.

A couple travel hacks: go on a weekday and use the kiosks downstairs (right after the metro exit) to avoid the line upstairs. You can buy an open round trip when you get your ticket and return on whatever bus suits your fancy.

Train: The train takes 33 minutes from Atocha, Madrid’s main train station. It costs around 20 euros round trip. Not bad, but we’d rather save the 10 euros and spend it on lunch. Check Renfe timetables here.

Both the train station and the bus station are about the same distance from the city center. Just get ready for a bit of a climb as they’re both located at the bottom of the hill. 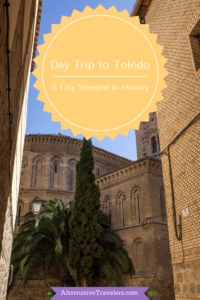 Ready to take a day trip to Toledo? Pin it for your next trip! 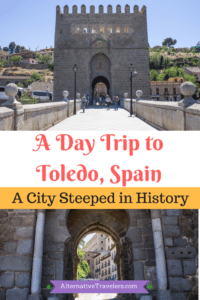 This post contains affiliate links. Thanks for supporting Alternative Travelers!

Alternative Things to Do in Berlin: Subculture, Squats,...

20 Amazing Things to Do in Valencia, Spain...

The Longhouse Cafe: A Community-Focused Vegan Cafe in...

Free Things to do in York, England