How to Cook for Non-Vegan Friends

It’s the usual catch-22 of veganism – how to cook for non-vegan friends?

You’re over at your friend’s house, and for the 30th time, you tell them you don’t eat meat. Or dairy. And it’s really no big deal. They feel so bad, and they hem and haw that if they knew beforehand, they’d have handled the food differently.

Alternatively, you could remind your friends every chance you can get that you strongly prefer to not eat meat and dairy. Then, understandably, they would find you intolerable.

Ever heard the joke, how do you know if someone’s vegan/vegetarian?

Perplexed by this paradox? Waste not one more minute explaining to your hosts, and spend the next hour preparing something veganly delicious for your wonderfully patient friends. Whether you invite them over for dinner or bring your own plant-based dish to the next potluck, the goals are the same: Please those previously meat-laden mouths with vegetable verisimilitude.

A vegetarian is easier to cook for than a meatarian, but don’t try those dairy substitutes if they choose cheese on the regular. Same thing goes with meat. If they eat meat thrice daily, they will not be impressed by tofu steaks and seitan strips.

So first, figure out your potential menu. If you’re lucky, your friend might be vegan friendly, which means they willingly indulge in these foods, and are generally curious. Then the plant based sky is your limit.

Often, they are not. Observation and research is your friend here. Don’t prepare salad when you’ve never seen them eat a vegetable.

Consider all allergies, intolerances, and preferences.

These are the essence of food satiation. When someone raves about some new food spot they went to, I can guarantee it was just the right ratio of saltiness, fattiness, and sweetness. There’s a reason you leave those places feeling more sluggish than after eating at home. They use more salt, fat, and sugar than you can ever imagine using in your own cooking.

So the trick is to use more than you usually do, but less than the restaurants do. How do you get this right? Understand that if your preferences for sugar, fat, and sweetness are lower, you’ll need to overcompensate a bit. So just put a bit more fat, and sneak in some sweetener. Add a dash extra of salt to their portions. If all else fails, hand them Sriracha sauce.

Vegan food is always less calorie dense than meat or cheese. Leanest piece of meat? Chicken breast. Still 25% fat from calories. So this regular glut of fat in their diet means they’re used to denser meals. Visually similar proportions in vegan food will look just right on their plate, but they’re likely to complain later to their meat friendly friends about how hungry they were an hour later.

Set up the snacks, plan an appetizer, make a main course, and do have dessert. Most non-vegans think that plant-based food and indulgence are mutually exclusive. Prove them wrong by stuffing their gullets like a Thanksgiving Tofurky.

4. Serve them the vegan foods they already eat (but don’t think of as vegan)

Once at a barbecue, a college buddy of mine sidled up to me whilst I prepared some food, and inquired about my recent change in diet with barely withheld judgment. Animosity quickly dissipated as he bore witness to the massive bowl holding the copious amount of slightly charred tomatillos soon be made salsa. Immediately he took interest, as he’d never seen it made before, and he loves Mexican food.

Chips and salsa. Guacamole. Hummus and pita. These foods have become staples of the light snack and appetizer scene in America. Take full advantage and save the more adventurous vegan treats for the truly veggie curious.

But don’t be a vegan slouch and buy the typical store brands. Impress your guests with next level steps. Make that guacamole/hummus/salsa from scratch. Don’t you dare buy that pre-made guacamole (or the seasoning!) off the shelf. Fervently chop up tomato and onions, and squeeze that lemon or lime with plant-based passion. Anytime I make hummus, I buy pita bread and toast it, which costs way less than pita chips and tastes oh so fresh. Not only will it be familiar to your guests, but it will have that extra special “look, I made this because I love you” touch.

The mind can alter your reality, just by one thought. Great food suddenly becomes unappealing, for no rational explanation (because there isn’t one).

I make an excellent vegan mac and cheese casserole that fools dairy ingestors and meat consumers alike. Not “melty fun” vegan cheese products either- all from scratch. Yet once the Sam gleefully spills the beans (not me, I know better), they stop and stare at the food, as if we told them it was poisoned.

Associations are potent and emotionally charged. Once you assume that good food requires animal products, then a lack of these ingredients will feel like deprivation. Our culture hijacks our brains from birth and hot-wires its values centers. The wonderful news is you can rewire your brain for health, just don’t expect your guests to do the same instantly as you eagerly place a bowl of vegan virtues before them.  You’ll have an uphill battle, and deceit is your best ally. So scratch vegan from your lexicon for the entirety of the event.

“All war is based on deception.” -Sun Tzu, The Art of War. 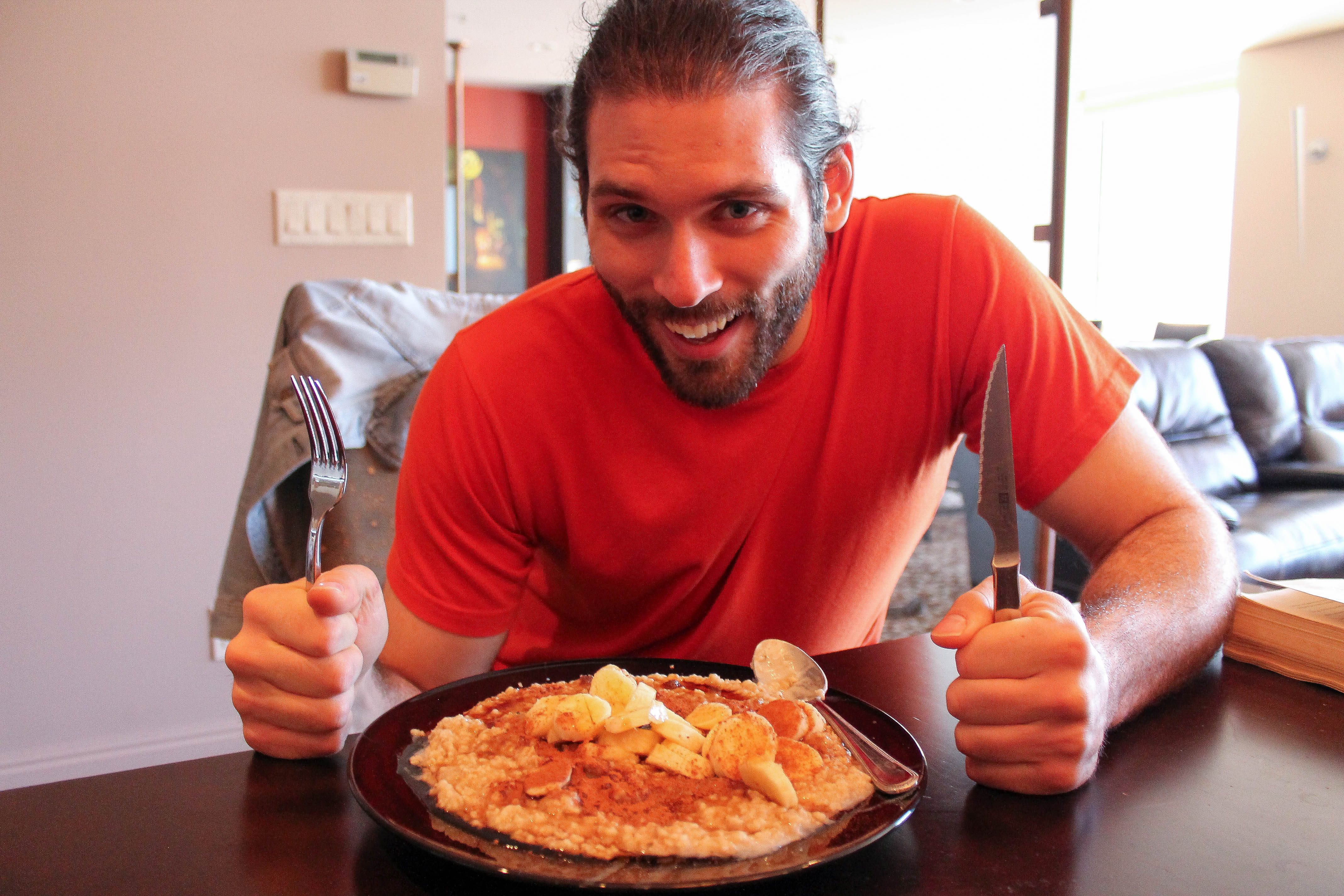 Pin the article for when you need to cook for non-vegan friends! 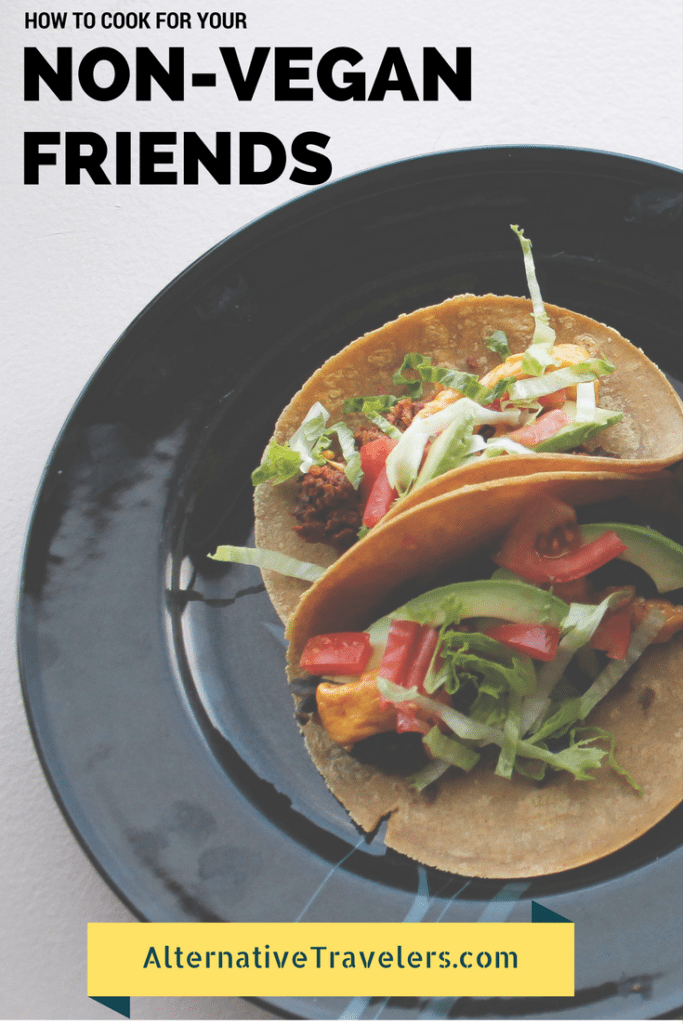 What are your favorite tips and tricks for cooking with friends that don’t eat the same way you do? Share them in the comments!

One Easy Way to Reduce Your Environmental Impact...