La Ñora Hike: A Secret Nude Beach, Sculptures, and a Bar at the End

Have you ever been to a nude beach?

I have – by accident.

It was one of those situations where you ignore all warning signs until it is too late. Then you find yourself on a remote beach on the northern coast of Spain, trying very hard not to look at the plump hairy man wearing only a tie-dye t-shirt as he picks up rocks on the beach.

And not figurative signs – actual signs. 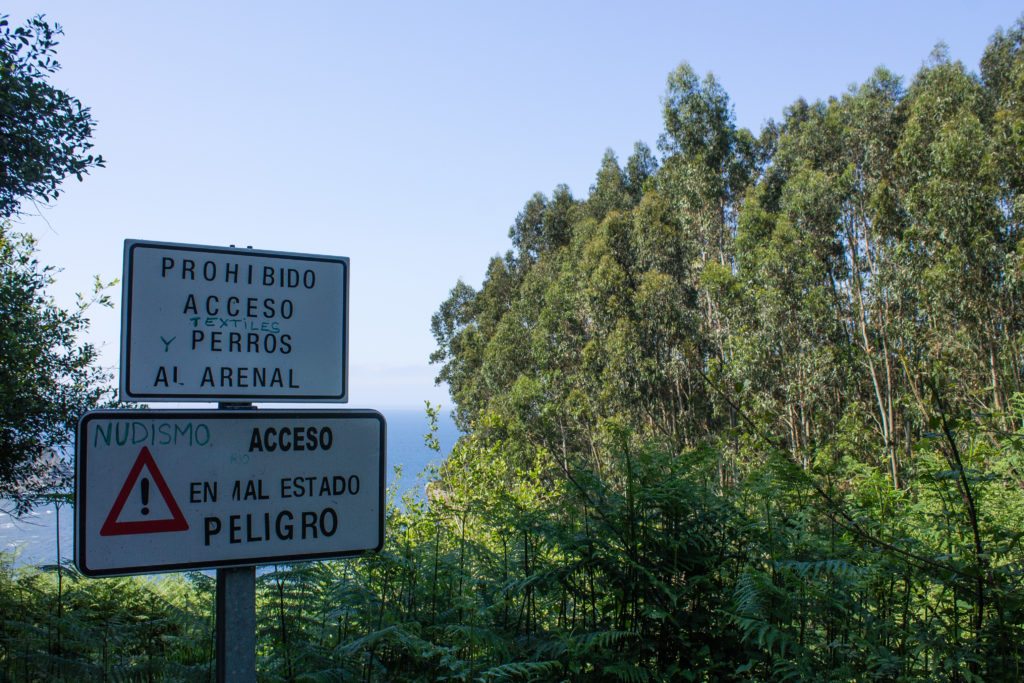 Not sure how I missed those signs as I literally took photos of them. At the time, at the top of the hill, we thought it was a joke. We thought it’d be a brilliant idea to snake our way down to the beach and slip our tired toes into the cool water of the Cantabrian Sea.

We laughed at the Nudism Sign (“silly teenagers”) and the Caution Dangerous Path signs and headed down to greet the water.

On getting closer, we came upon the second sign which seemed more like a prehistoric omen. The pictographs certainly helped get the message across. 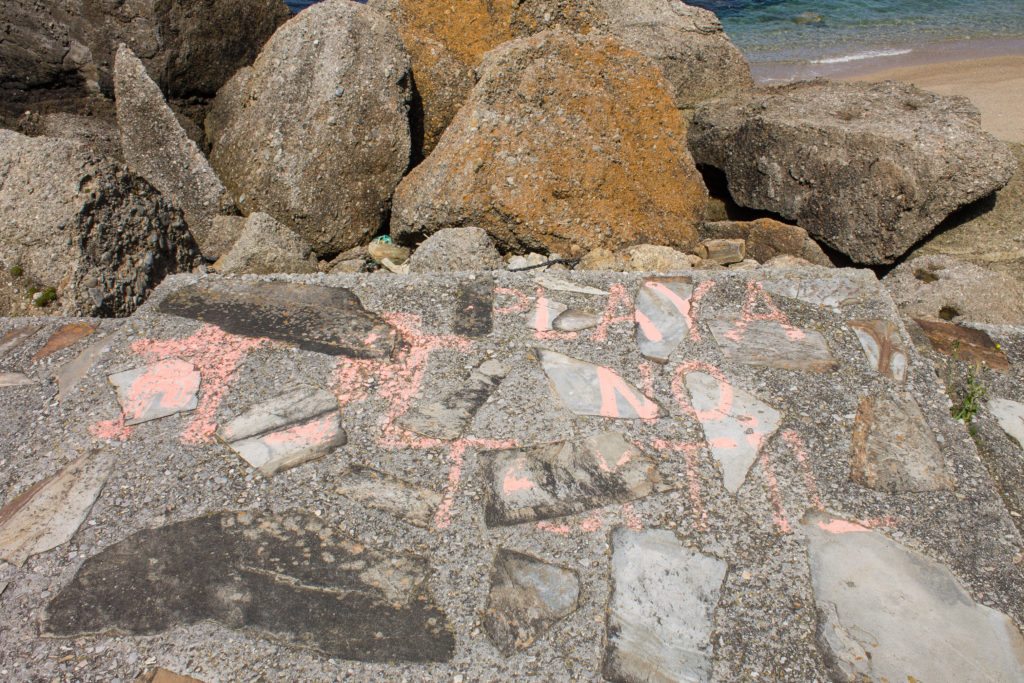 Reads: “Playa No Textil” AKA Nude Beach. Note the helpful pictograms for those who cannot read.

But we hadn’t traipsed down that hill just to go back up it. After climbing over an avalanche of rocks that seemed to be quite strategically placed to deter outside visitors, we arrived on the beach.

We shrugged, figuring the nudists were all still at work. Even nudists have to pay the bills.  Stretching out on the sand, we marveled at how beautiful our private beach was. Just us, the cliffs, the ocean, and some rather large rocks. 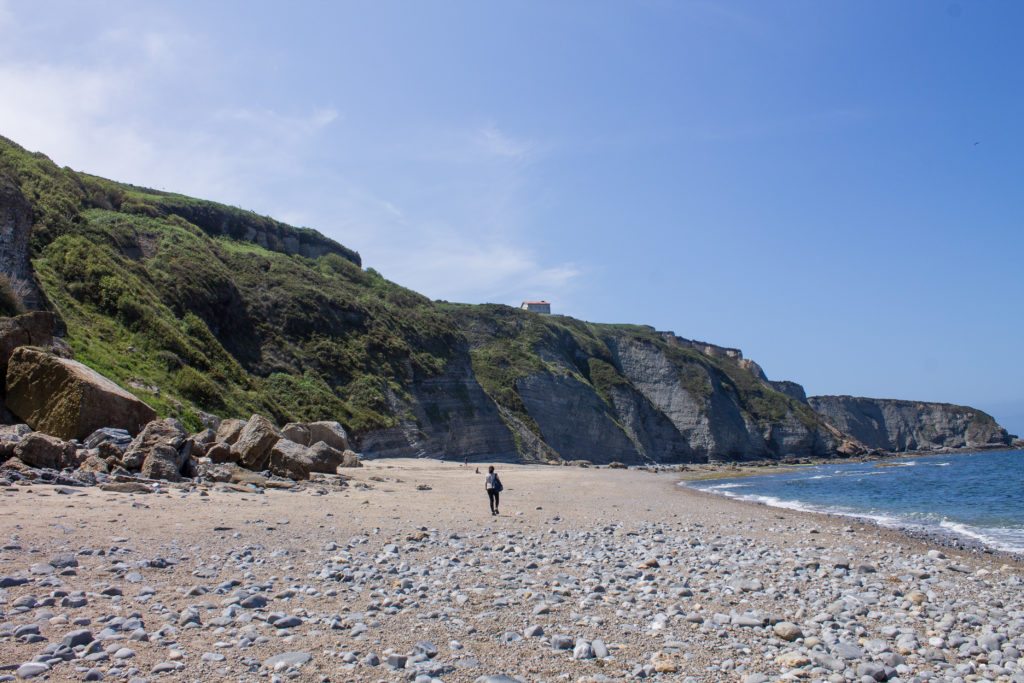 It wasn’t until movement stirred from behind the rocks that we began to take note. I glanced behind me. Sitting casually on a rock and nestled between other boulders was a man reading a paperback, entirely naked.

It was then that I began to notice movement happening around other rocks. They were coming out of the wood-rock?-work. Further down the beach, a woman emerged from the large boulders and strolled along the sand.

The strums of a guitar came from behind us and I involuntarily turned my head and looked straight into the spread-eagled crotch of a furry Asturian man.

My head quickly snapped back into face-forward mode. Though no one told us to leave, we felt a bit as if we were crashing the party. Fully clothed, it somehow didn’t seem entirely right to be there amongst the nude people of the rocks. 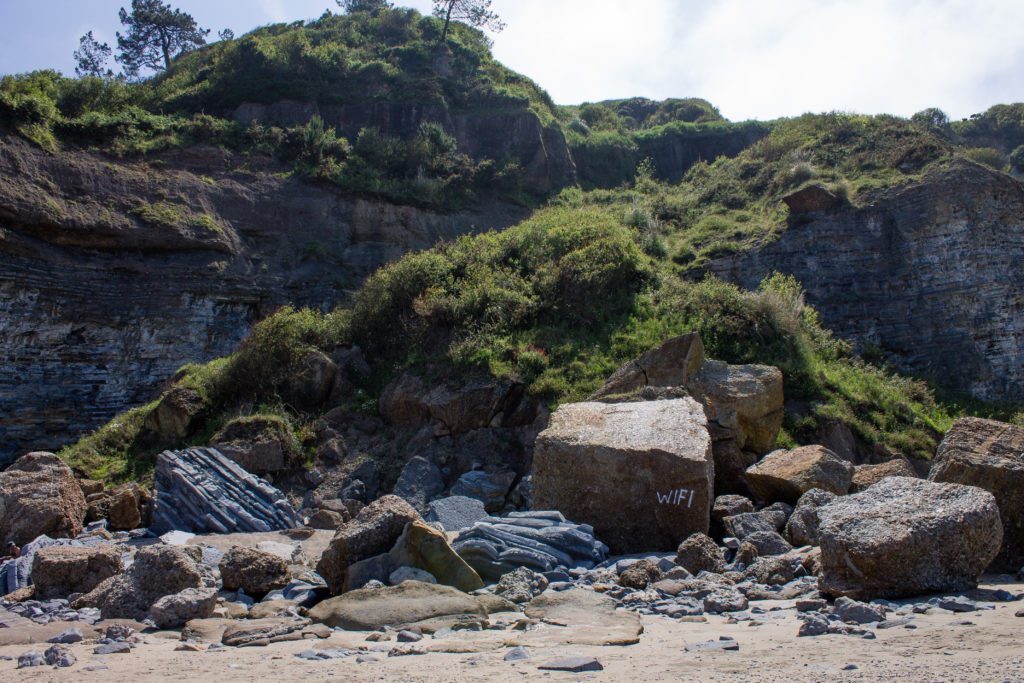 After some more sunbathing, we put our shoes back on, clambered over the boulders, and re-entered the clothed world to finish the rest of our hike.

We had stumbled upon the nude beach on La Ñora hike, aptly named because it terminates at La Ñora beach. We chose it because it leaves from Gijón, where we had spent the night before. Easy peasy – and we heard that there was a bar at the end.

Because this is Spain. And there is always (ok, usually) a bar at the end of the hike. 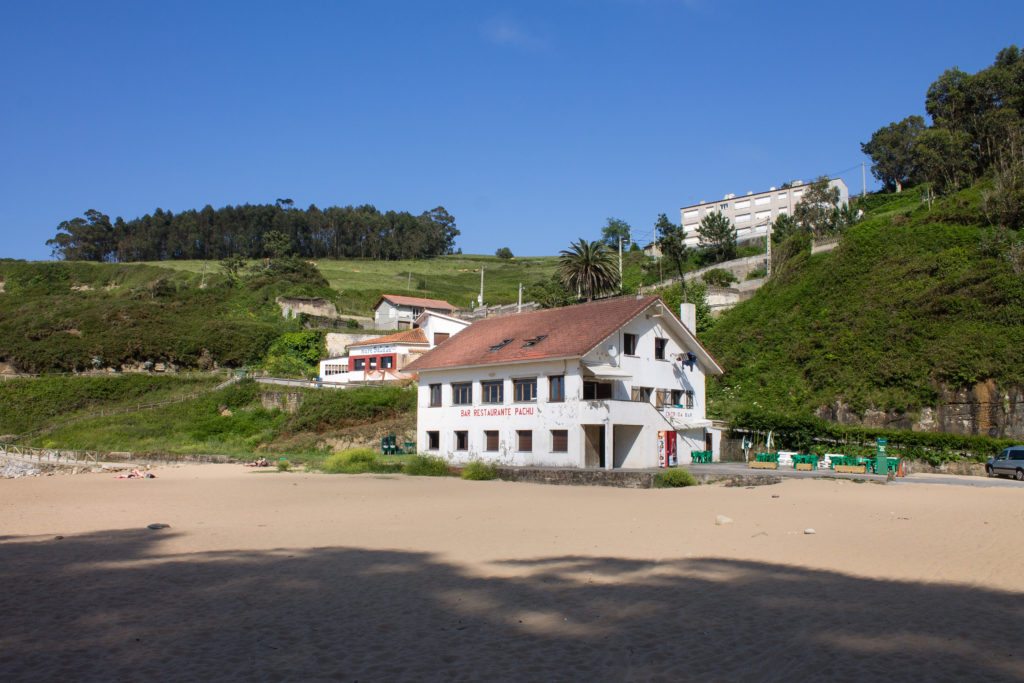 When most people go to Spain, they make a beeline for the south. Quaint white villages, sandy beaches, and warm sun draw crowds from around the world. But while the fast AVE train zooms down south, I’ll take the bus or drive up north any day.

A few months ago, with a friend in town visiting from the U.S.,  we did just that. Just five hours out of Madrid lie green landscapes and rugged coastlines that’ll make most people think Ireland instead of Spain. 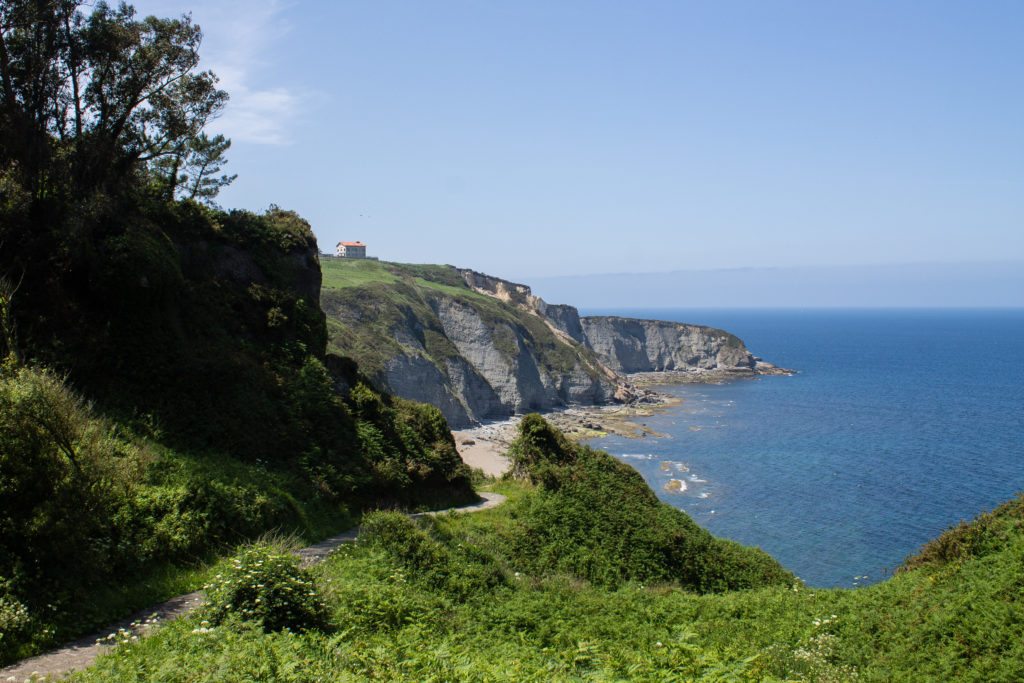 We stayed in Gijón, a coastal town on the northern coast that looks like it’s seen better days. But people don’t come up to Asturias for the city. They come for the nature.

And La Ñora is as local a hike to Gijón as you can get.

Our first breakfast in Gijón, we got to chatting with the woman running the veg-friendly Green Zone Bio Bar and asked her what was her favorite hike in the area was. She lit up and immediately answered, “La Ñora.” (In retrospect, maybe she’s a nudist. Would explain that twinkle in her eye). 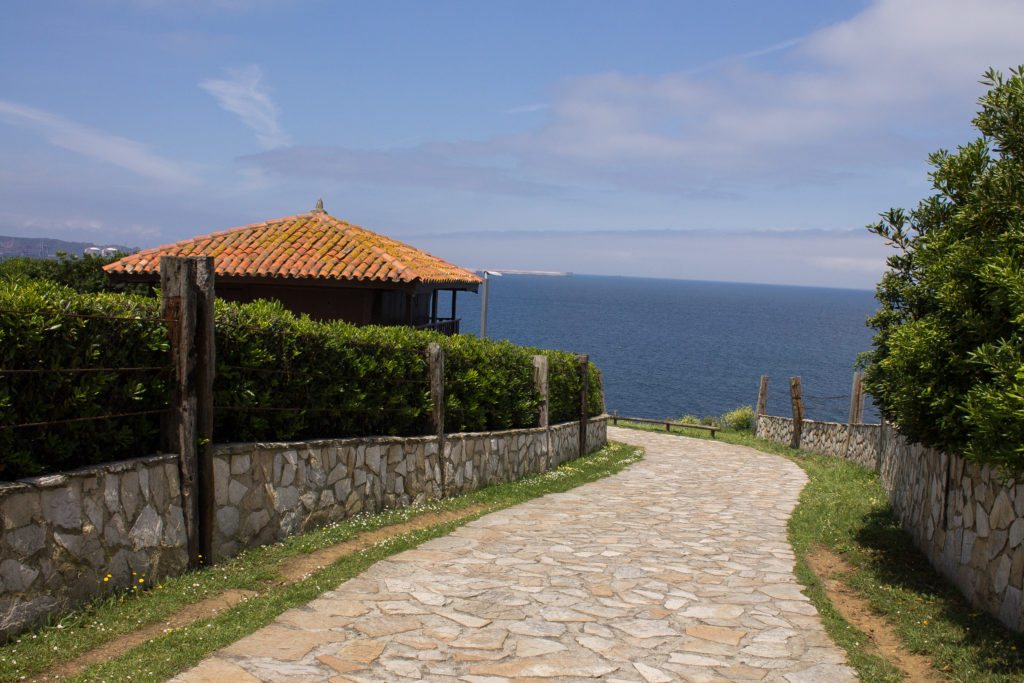 Even though we had rented a car for the weekend, having just done the 5-hour drive up from Madrid solo, I wasn’t keen to get back behind the wheel just yet. La Ñora hike is perfect because you can start right along Gijón’s boardwalk.

The area by the beach feels a little like an old Florida, with retro-looking apartment buildings that were once new but now just look kind of sad. Luckily, the boardwalk quickly opens up into the green greenness that is the beauty of Asturias. 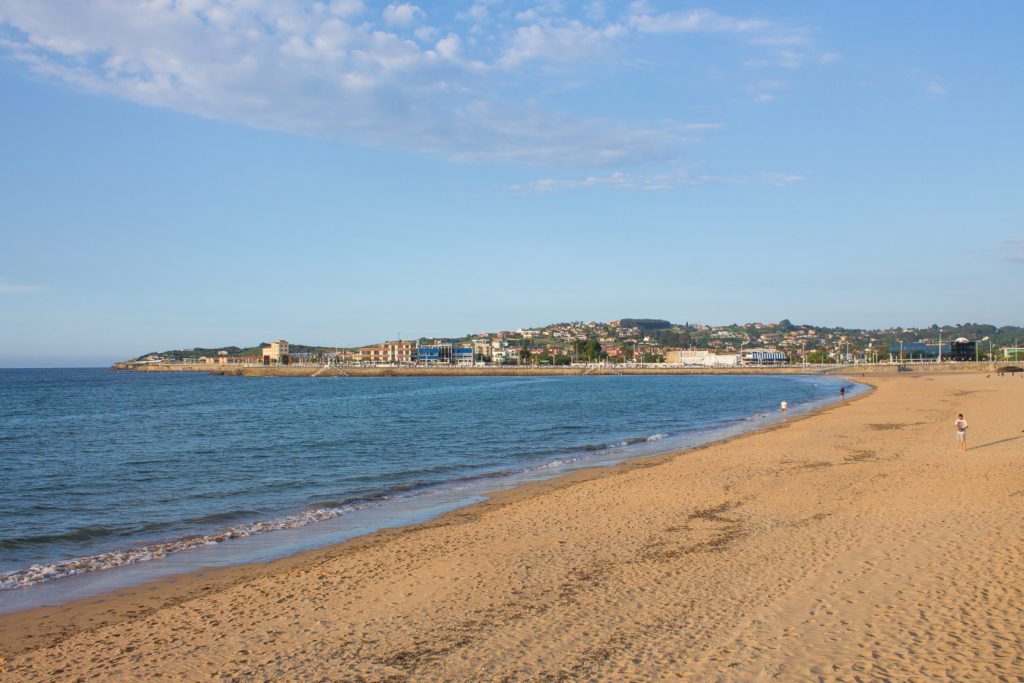 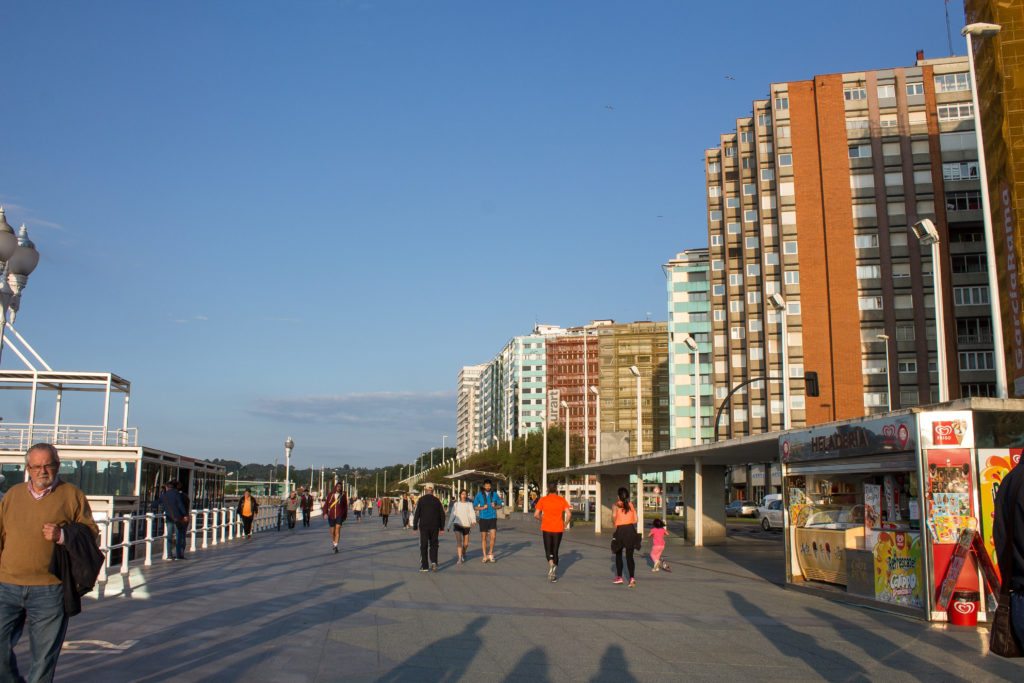 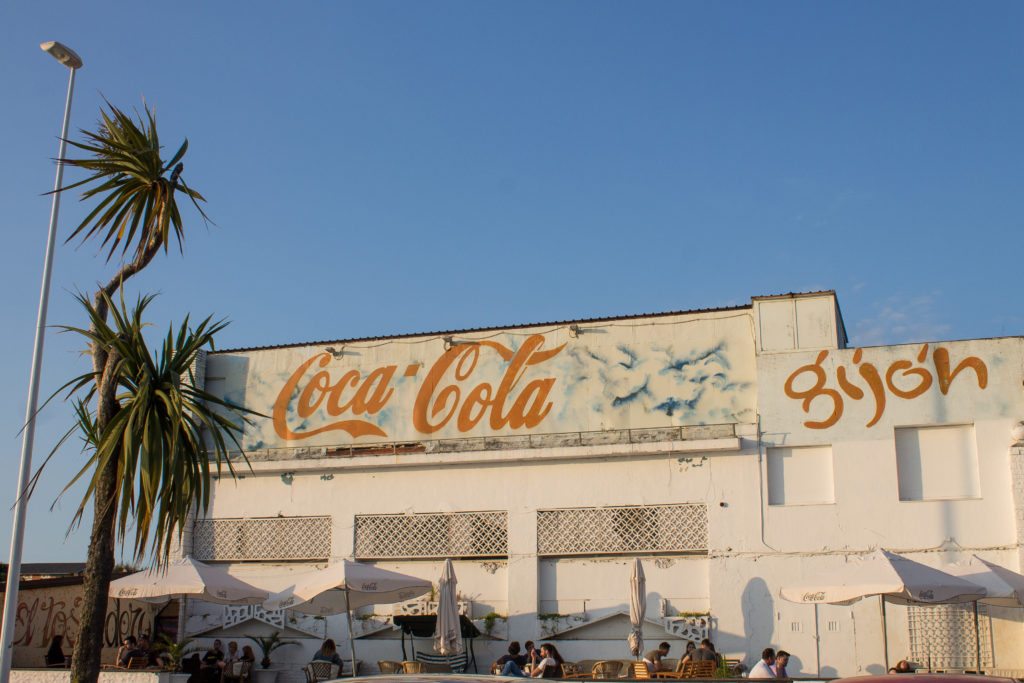 Leaving the city behind and transitioning to a coastal walk, the intrepid hiker begins to come upon seemingly random sculptures.

One of the most impressive is the Monumento a La madre del emigrante, the Monument to the Mother of Migrants, a touching and heartbreaking representation of all the Asturian mothers who waved goodbye to their children who left Asturias in search of a better life. 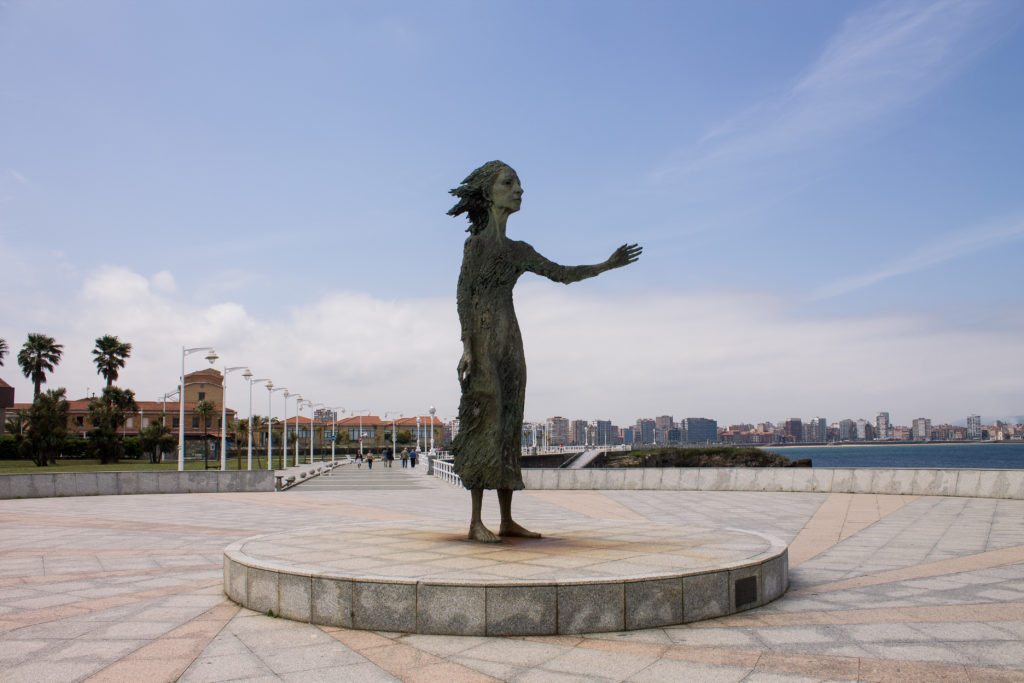 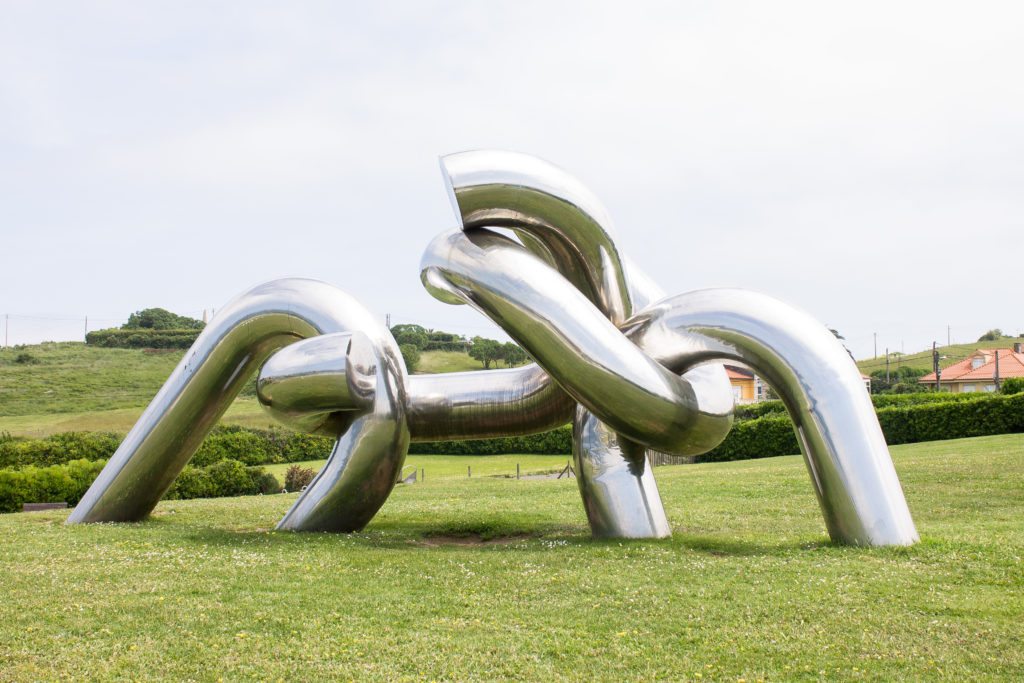 Solidaridad by Pepe Noja: a broken chain made from stainless steel 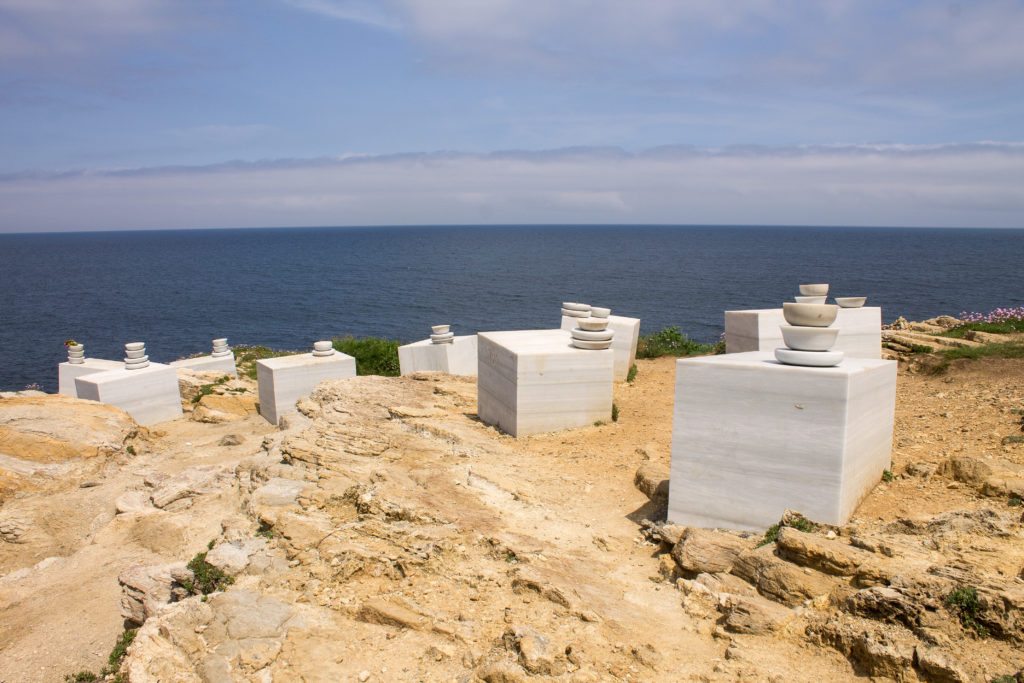 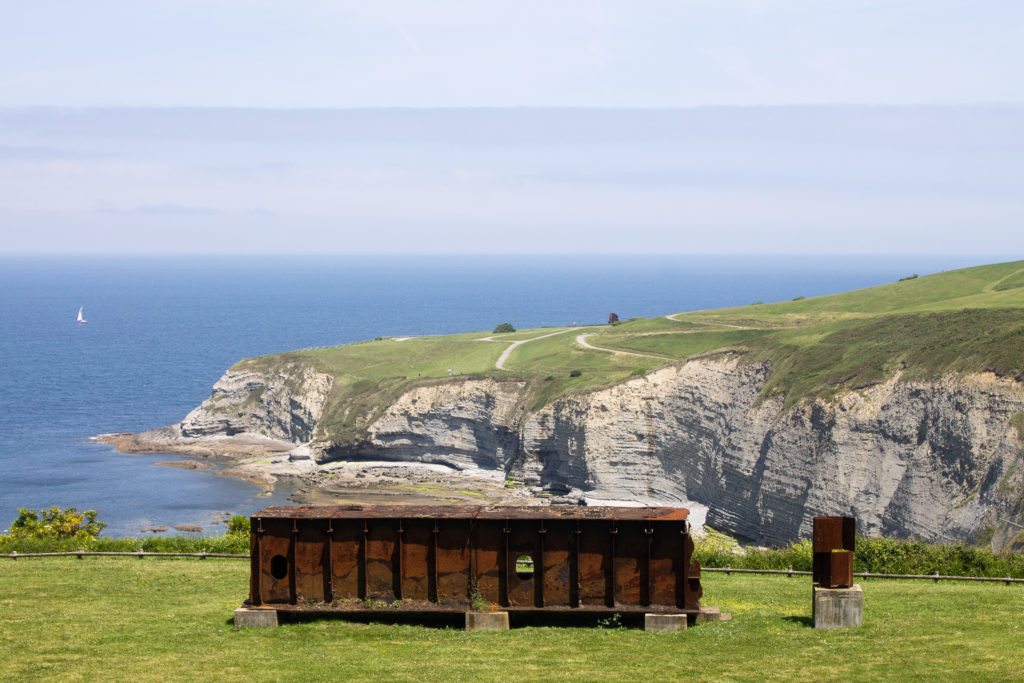 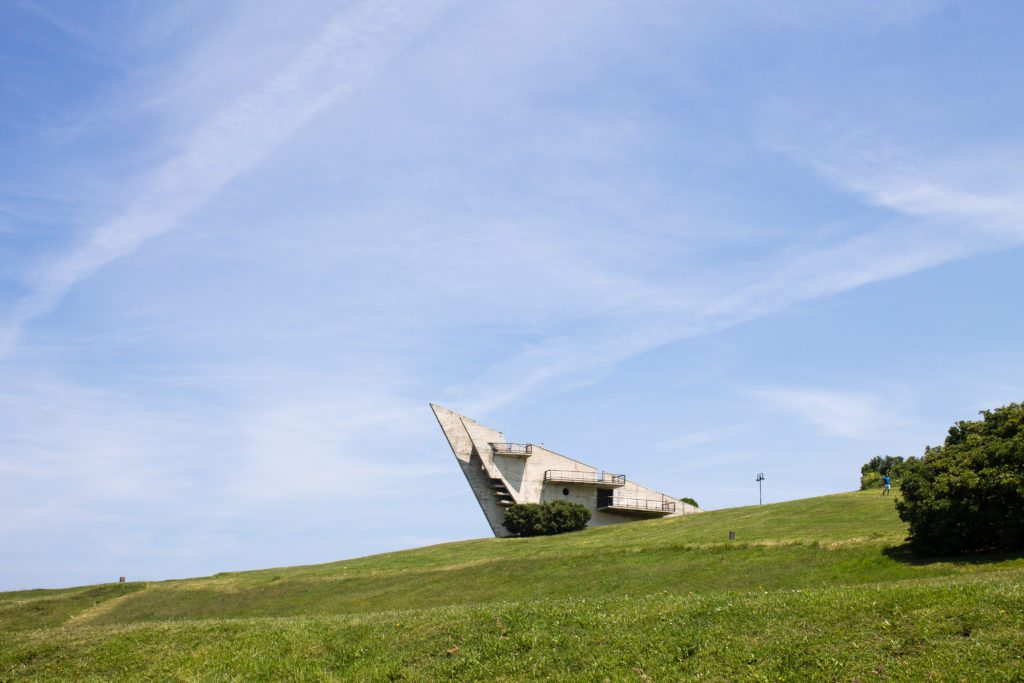 Leaving the sculptures behind, we climbed higher above the dramatic Cantabrian Sea.

We stopped for a lunch of dates and apples, breathing in the fresh air that comes from the meeting of lush green hills and crashing blue seawater. As the city starts to fall away, the Asturian hills start to come alive. 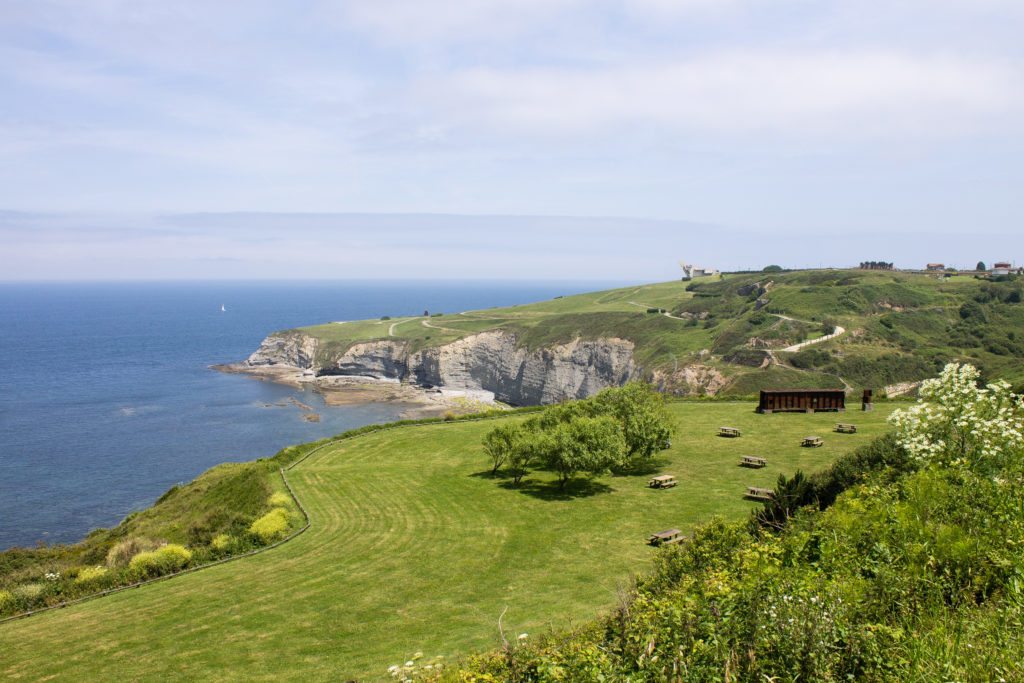 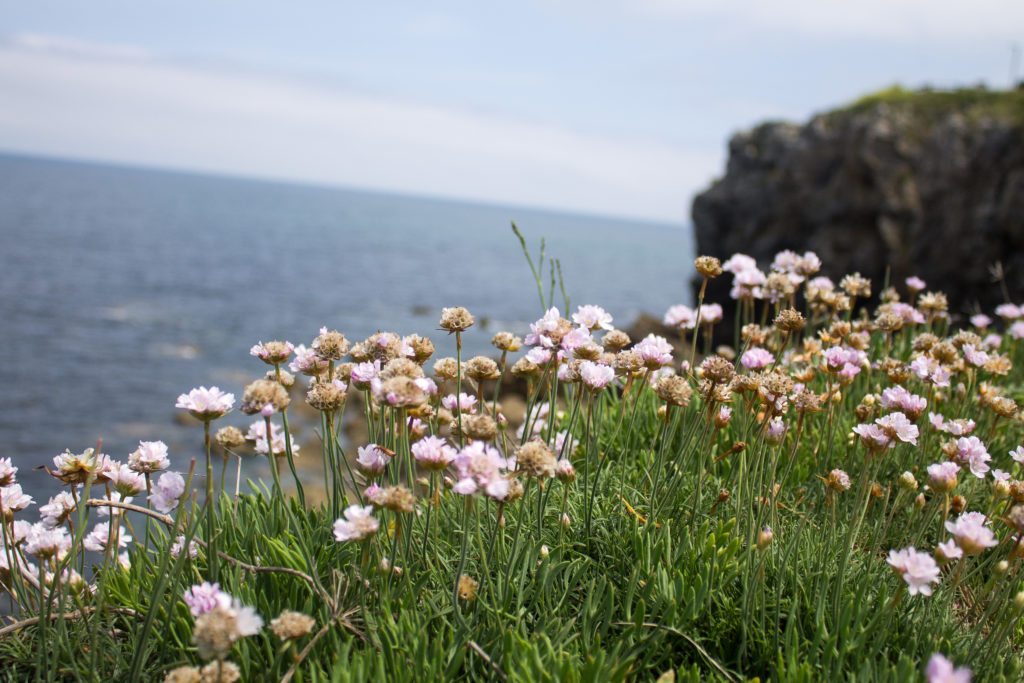 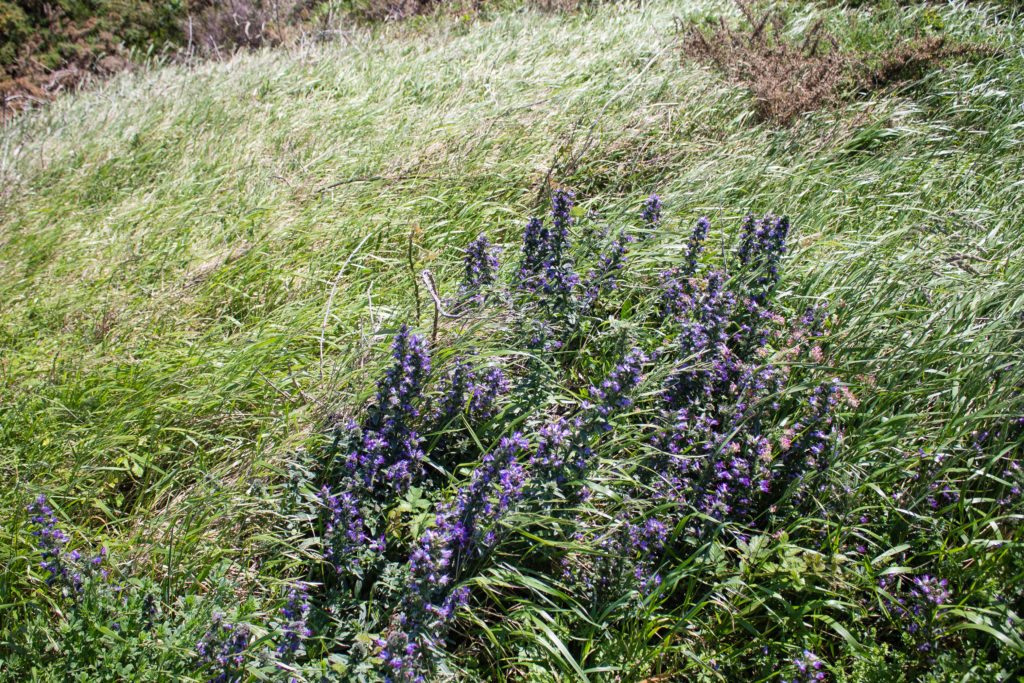 We continued on, stopping for detours (see nude beach story) and many a photo-op. Finally, we turned a bend and saw our destination: La Ñora. A little beach nestled down below. We sat on the beach until the wind drove us up to the bar on the hill (what a hardship) for celebratory tintos de verano (summer wine). It had been a hike to remember. 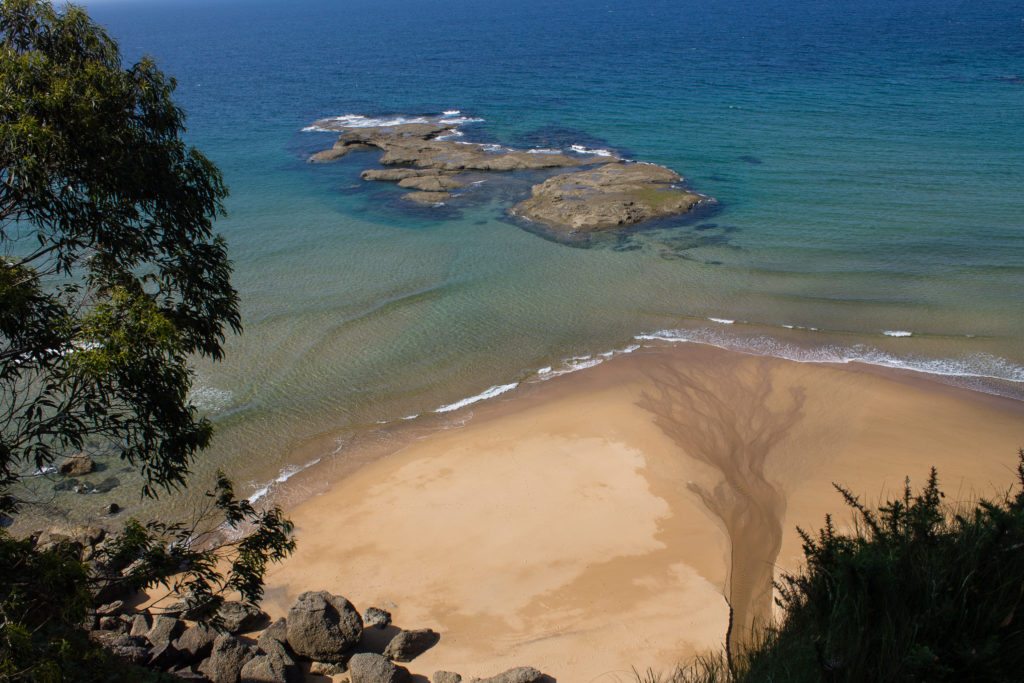 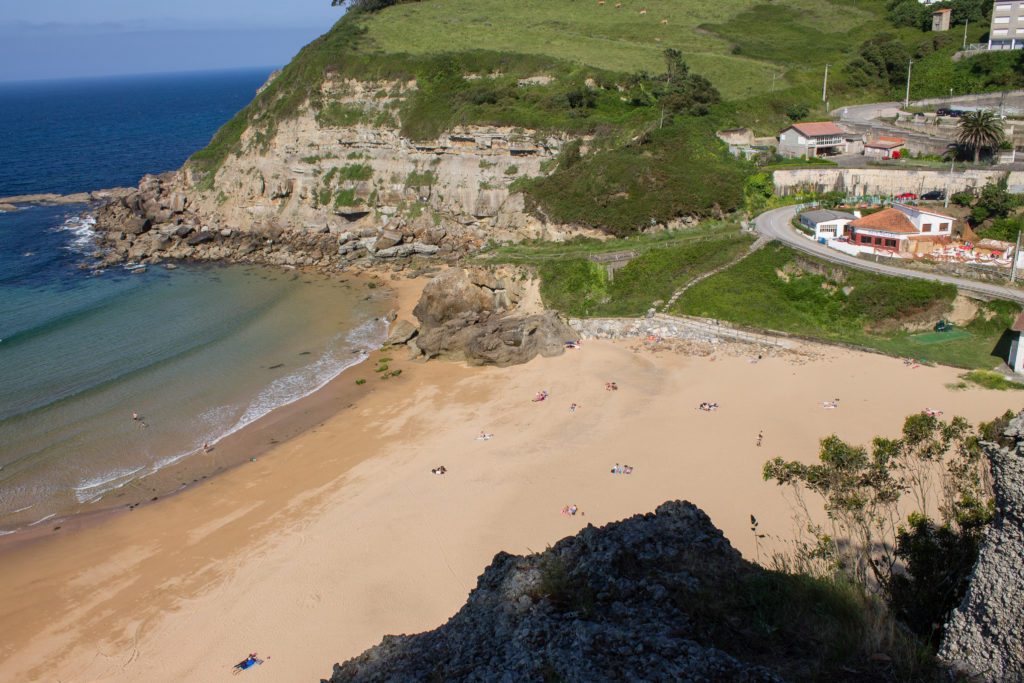 The hike is an ideal mix of art, coastline views, and a little bit of forest. It’s perfect for hikers of all levels as a lot of the path is flat and tiled.

The Asturias Tourism board has an overview of the La Ñora hike here.

This pdf guide to hikes around Gijón by the Gijón tourism board is in Spanish but even if you don’t read Spanish it has some helpful maps and information on distances. A good starting point if you’re looking for other hikes to do in the area as well.

If you take the same amount of time we did, stopping and taking detours along the way, you may find that you don’t want to walk back. Ask your friendly bartender for the bus number – just get ready for him to laugh at you like he did with us (the bus stop is about a 20-minute walk from the bar). 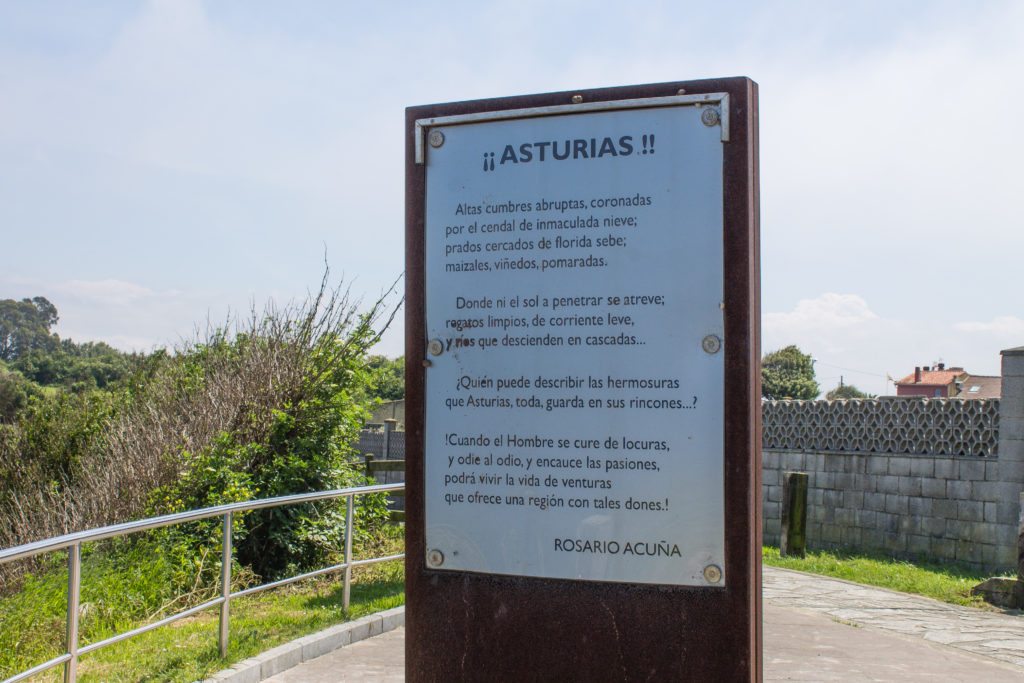 10 Stunning Vegan Hotels in Spain for the...

Romans and Royals: A Day Trip to Segovia...