Who creates a better meal?

An executive chef with 20 years of culinary training?

A grandparent with 40 years of cooking for a family?

Definitively, none. Art is subjective, and the culinary arts are no exception.

Yet the question persists in my mind, not because it’s unanswered (I’ve already made my choice). Often, even if a child loves their parents cooking, our highfalutin sections of society have managed to drill into the rest of our plebeian brains that nothing tops an executive chef trained in the mystic arts of high cuisine.

If I had to choose who made my meal, I’d probably go with my favorite parent (or grandparent).

Why? For practical reasons mostly. I can’t afford most fancy food and I have zero tolerance for pretentious food service. I also like to believe that their food is better.

Maybe the better question is this: 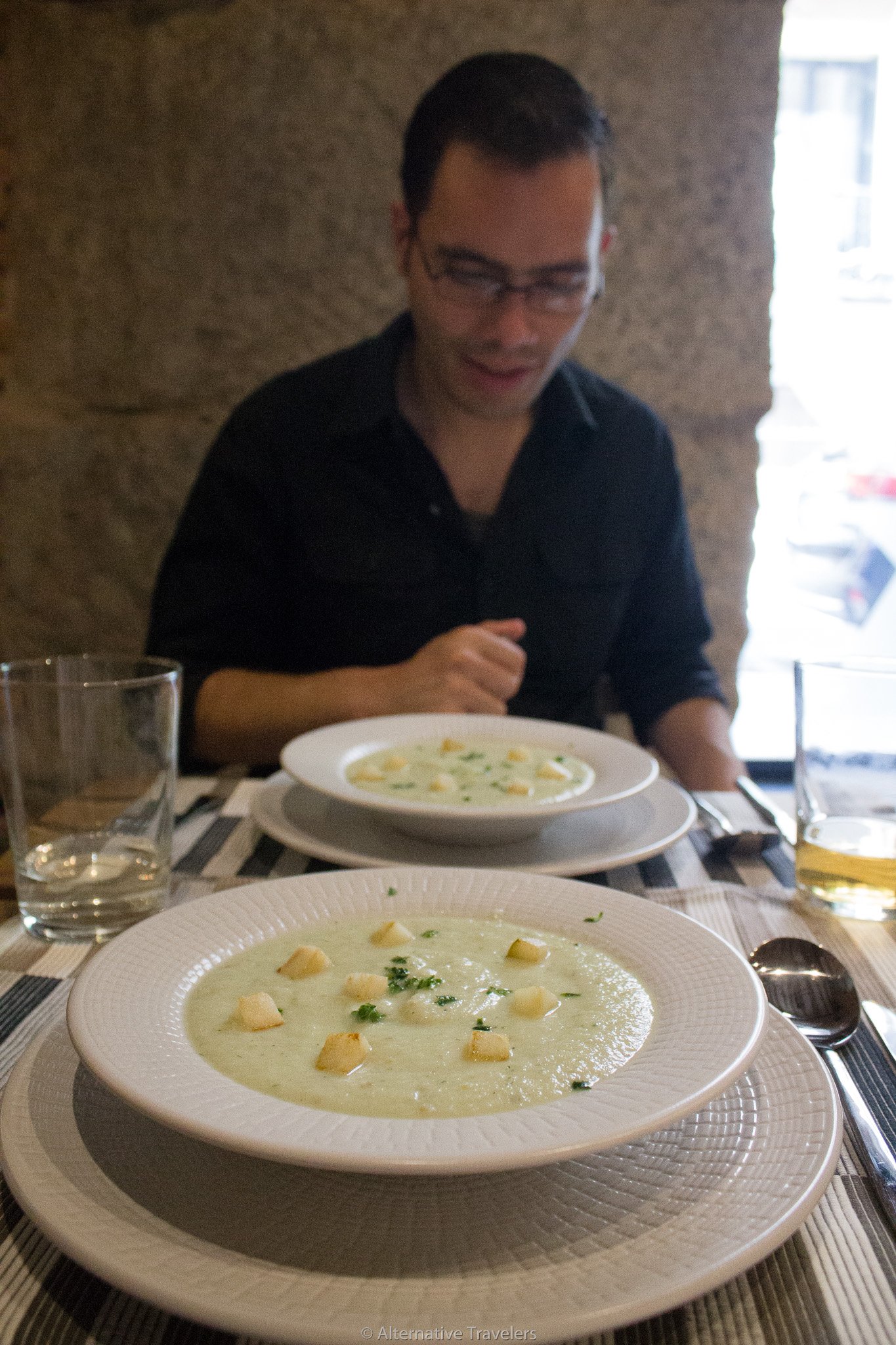 The pleasure of a meal made just for you.

There’s something that warms the soul in a well-intentioned meal made for another that takes into account years, potentially decades of a relationship, and that’s something a school cannot teach you to do.

Yet! There is something to be said for high cuisine. Even if you don’t partake, it influences the food you eat, even in the cheap versions. In the film The Devil Wears Prada, one of the main characters says (I’m paraphrasing) just because you think you don’t care about fashion, doesn’t mean it doesn’t play a role in your life. Fashion from the top influences fashion at the bottom, including that bargain bin sweater you got half off.

Nuance and layering of flavor is the biggest takeaway for me from my small run in with pretentious fancy food (I’ve worked in restaurants both back and front of house). They’re pretentious for a reason – they hold the food to high standards.

And when you apply that to vegan food, the challenge is arguably higher.

Julian, the gregarious proprietor of Landareak (Basque for vegetables) sets out to unite these two ideas. High-quality food (minus the pretension, fortunately) made from a place of love. 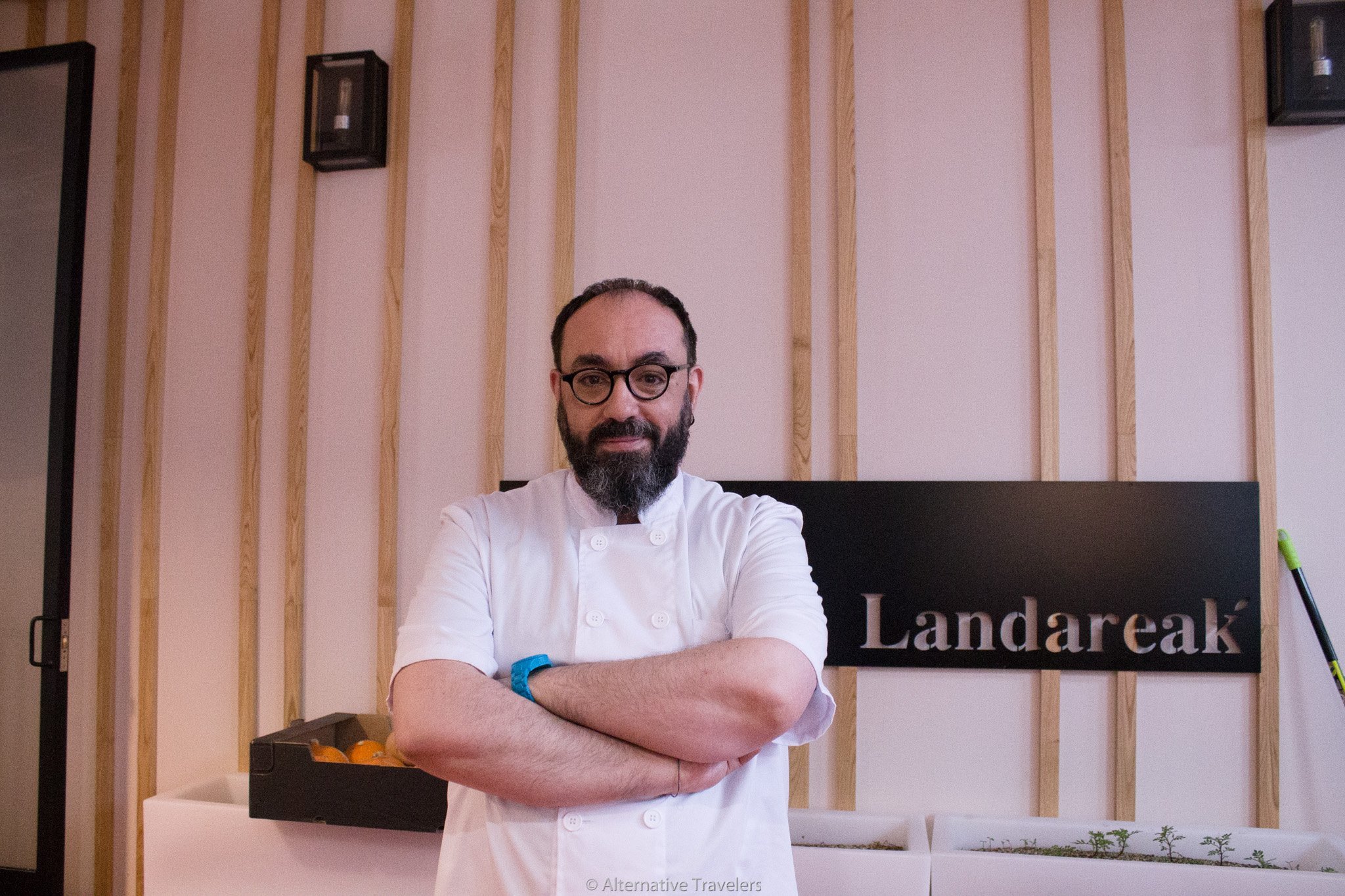 Warning: this man will change your mind about vegan food.

After a couple of repeated visits we had made to the restaurant, Julian was able to perceive the intense joy we experience from eating good food. From our brief (but excited) interactions, he decided to graciously treat us to an unforgettable meal on a day the restaurant is normally closed. He knew how much we wanted to try the menú del día, but we were leaving Spain the next day. He insisted that we come back for a special meal, saying, “You can’t leave Spain without trying my food!”

Julian originally went to school for film (like me) but ended up learning the culinary arts in Catalonia while working (like me too, except in New York). There he learned the intricacies of layering flavors in a dish. As you’ll see, this layering and nuance are what stands out in all his food.

He is persistent and a perfectionist. His cheesecake is the best we’ve ever had. (Read more about the best vegan desserts in Madrid in our guest post on vegan travel blog Veggie Visa). 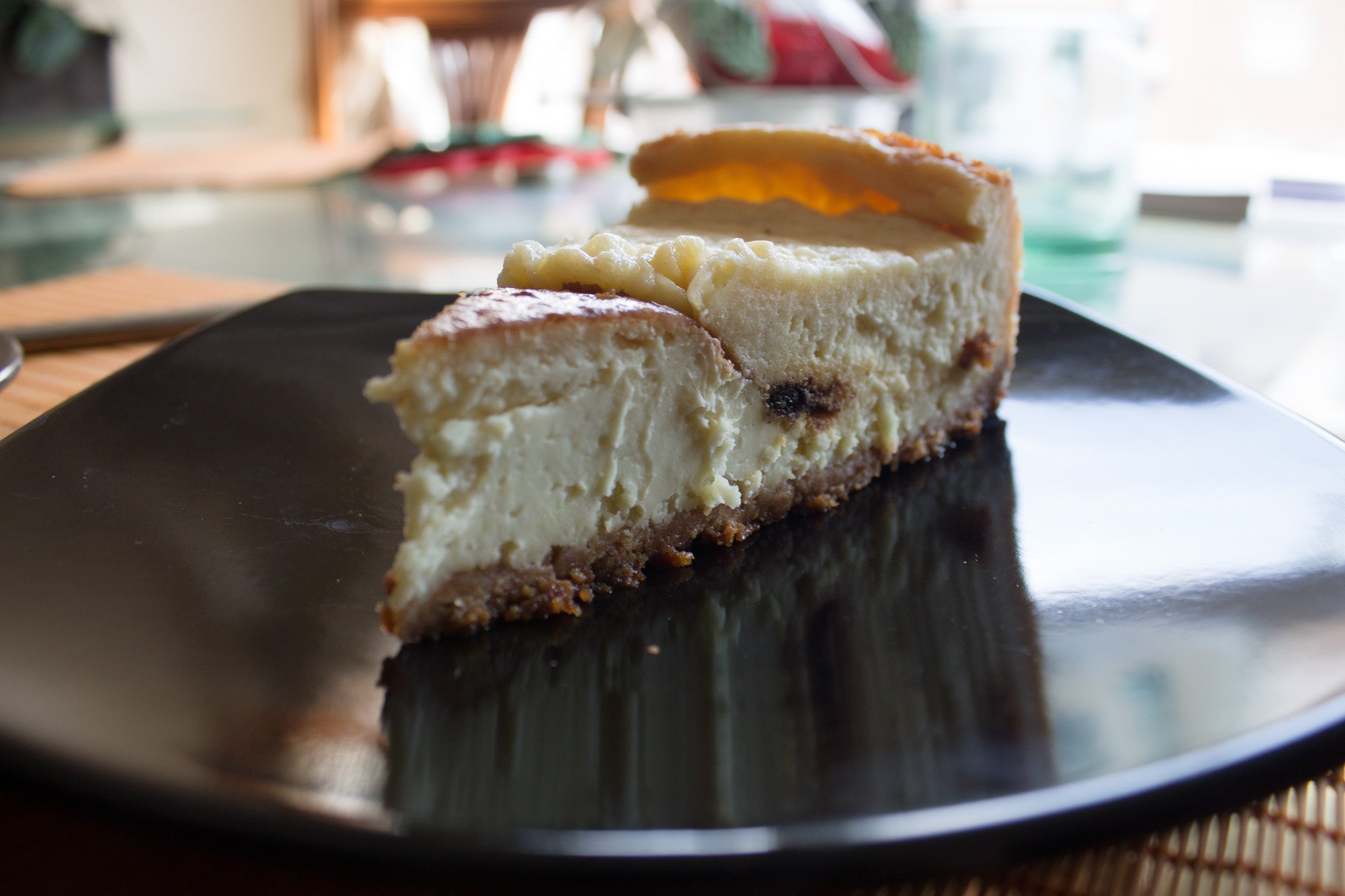 Perfection in taste, texture, and presentation.

It took him several months to get it and set it just right, with many trials and errors, starting at least a month before the restaurant opened (consider what he already needed to know to even begin this recipe – years). He even showed us photos of the fails, something most creatives are very reluctant to share. 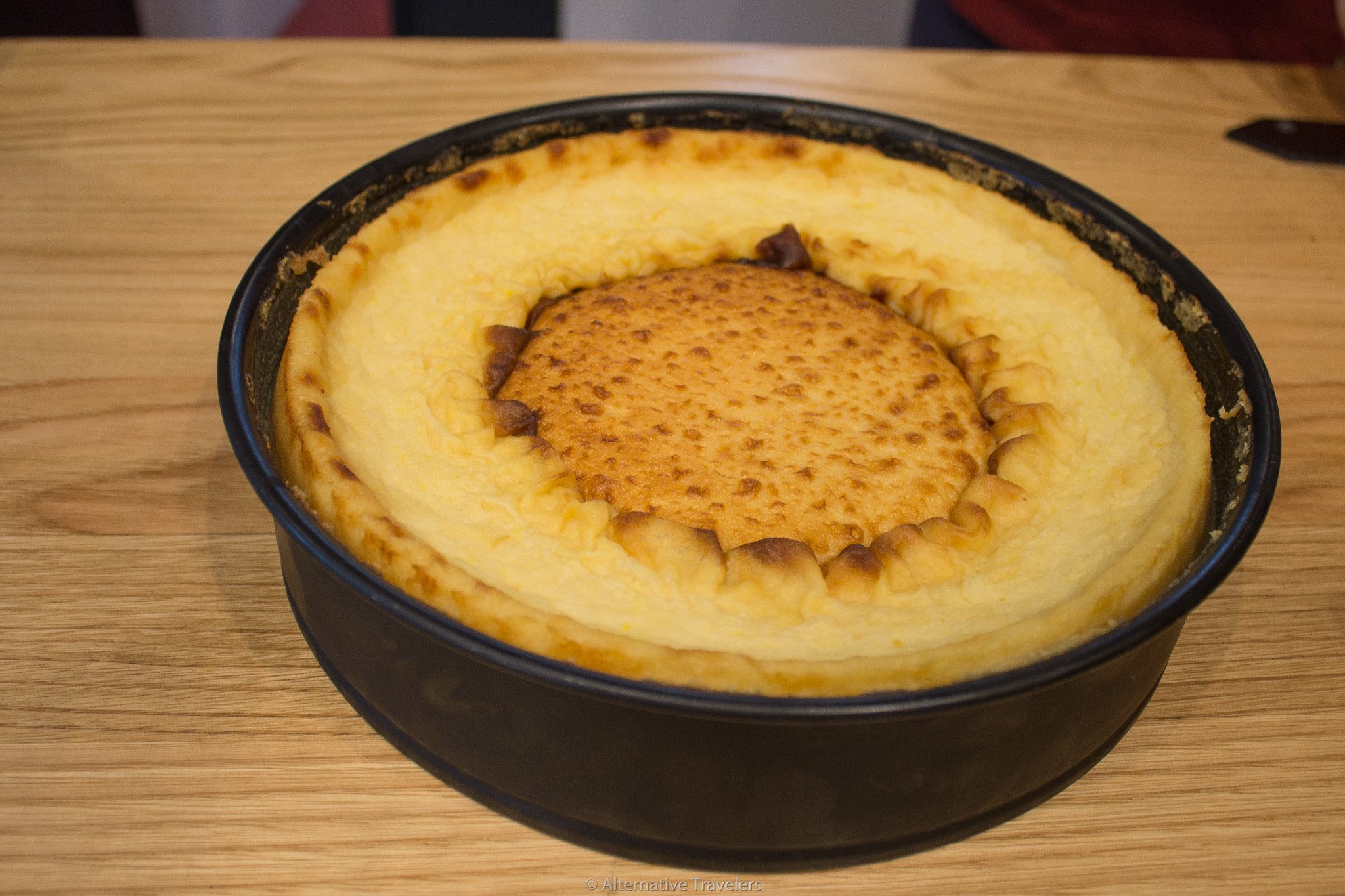 Clearly Julian likes a challenge. This was further made evident by his love of American reality TV shows focused on challenges, like Survivor, but in particular, Iron Chef America. In the latter, top chefs are put to task to incorporate a key ingredient in a series of dishes to be served to a panel of extra scrutinizing judges.

His professional culinary interest in making vegan cuisine happened after already living in Madrid. After making some vegan menús for Christmas he received very positive feedback. This encouraged him to take his traditional cooking knowledge and experience and apply it to vegan cooking. 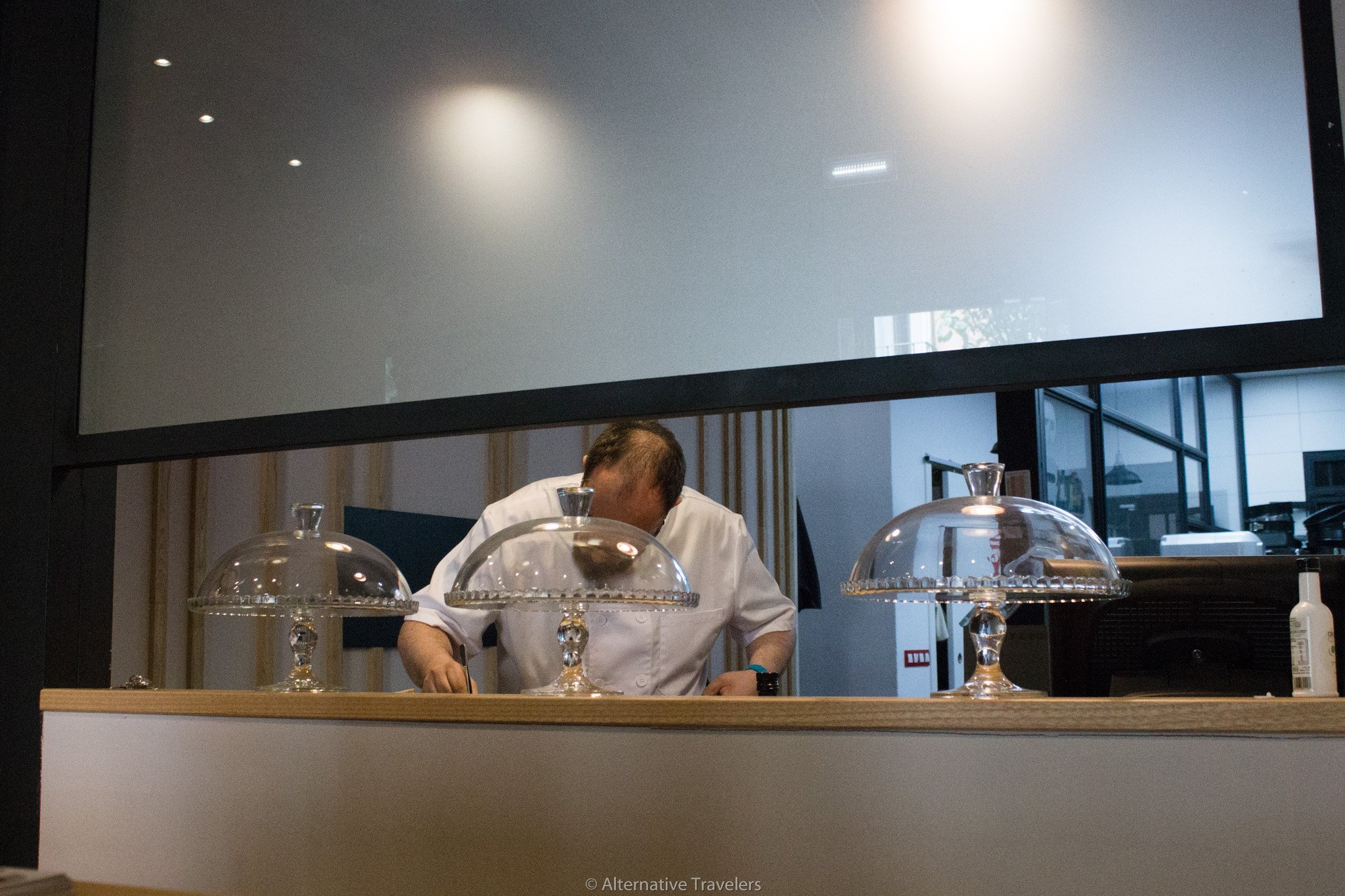 Julian adds toppings to one of our dishes using giant tweezers.

Julian’s friends say to him “tú no cocinas – tu guisas”. Literally, “you don’t cook – you cook.” Wait, why use two different words for cook? While cocinar (the verb in infinitive form) means literally to cook; it will never mean anything else. The other word, guisar, means to cook as well, but also has the additional meaning of to stew. Surely they didn’t mean he doesn’t cook but stews?

Truth be told, there isn’t a way to directly translate the meaning of guisar used by his friends. It has a hidden meaning that we can’t really translate into English because our American family culinary traditions don’t run as deep as other countries. What they meant is the difference between a chef cooking something fanciful and delicious, and a parent or grandparent cooking you something that warms the soul and makes you feel loved. Julian was quite honored by this comparison and you will see he rightfully earns it.

Julian has this preciously romantic view of the USA. He felt that serving us this meal embodied the popular image of a chef providing a personalized, intimate meal for a couple in a tucked away corner of a bustling city. Except in Julian’s version, he’s a chef in Brooklyn (coming from NYC we love this detail).

In essence, it was true: we felt like we were invited into Julian’s own home and that’s exactly what he wanted. We even had the pleasure of seeing his kitchen and all his gadgets. It’s spacious and contains tools I didn’t even know existed. Also, all his takeaway packaging is plant-based, so fully compostable. 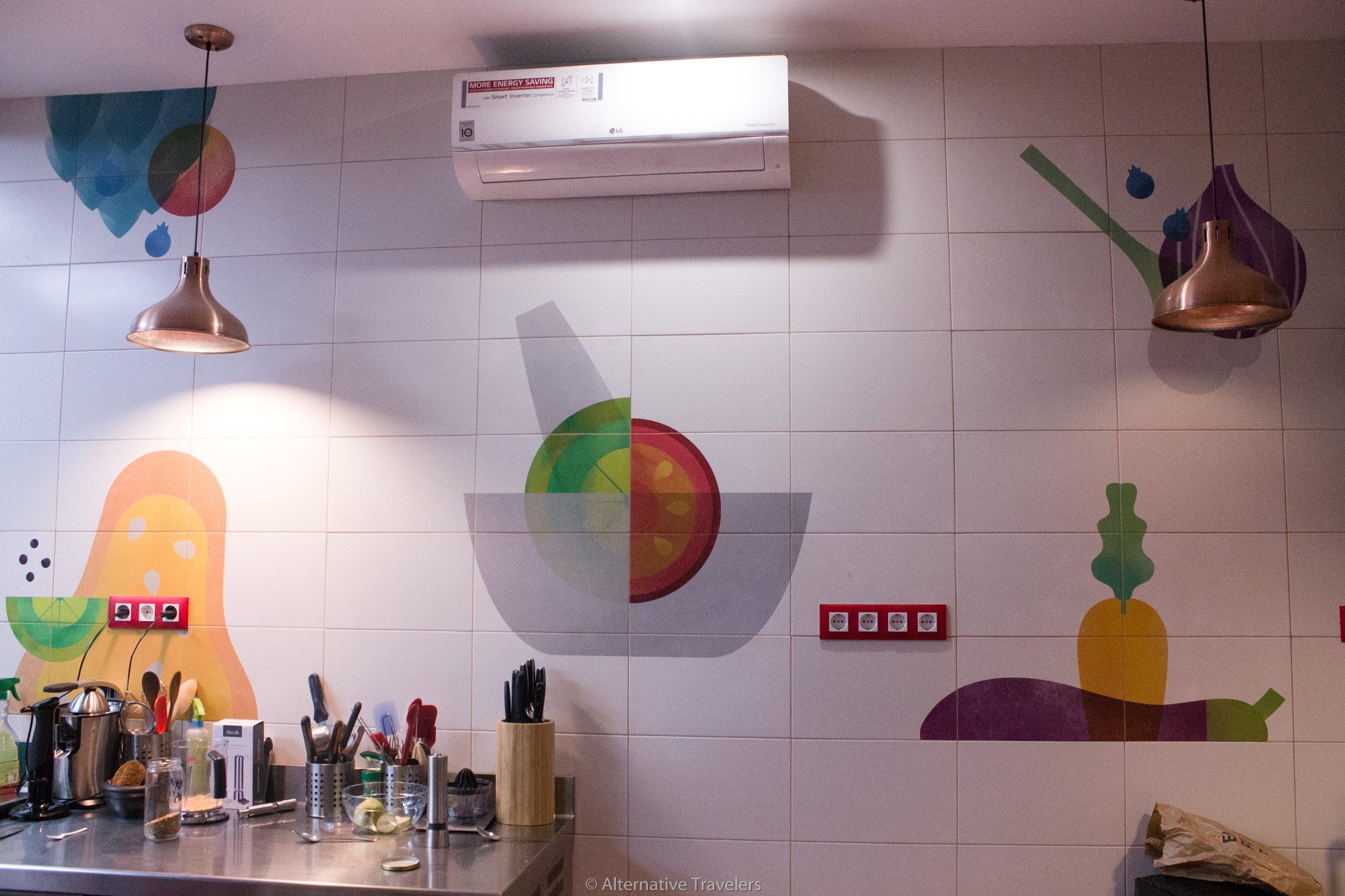 Quick disclaimer: as at all restaurants in Spain, the menú del día is not something on the permanent menu, known as la carta. These daily specials are exactly that. While restaurants often offer the same dishes on rotation and according to seasonal produce available, these dishes vary from day to day. So don’t expect to have what we had, though we describe these in detail so you can get a feel for the type of experience and food that you can expect at Landareak.

The aperitivo (appetizer) was muhammara, based on an original Syrian recipe (though the paté/spread has made its way into many other countries). This dish, no matter the country, is pureed walnut and roasted red pepper, though the seasonings may vary. In this particular recipe, Julian uses pomegranate juice. The main quality that counts is how fatty or “gordo” the paste is, as it should come out as a rich paté, rather than a lighter dip like hummus. 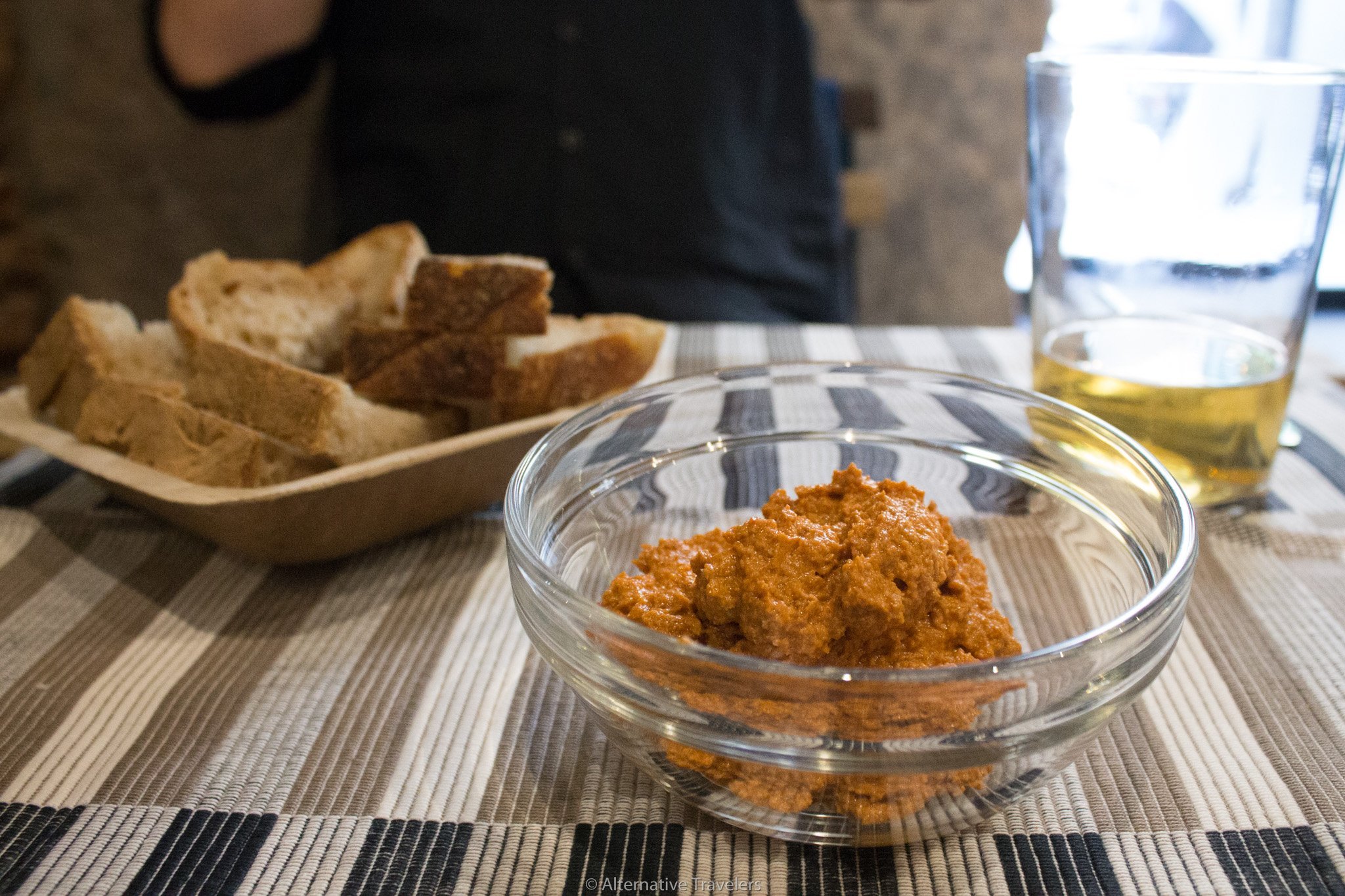 Next up was a cool cucumber soup, a dish inspired by a typical Basque dish served at Kaskazuri, a high profile Basque restaurant, and reinvented for Landareak. Even though it’s mostly blended cucumbers it was still very creamy and refreshing. Julian blended in pears, soy milk, and dill (Julian called dill a cucumber herb – used almost exclusively with cucumbers), and garnished with caramelized pear. 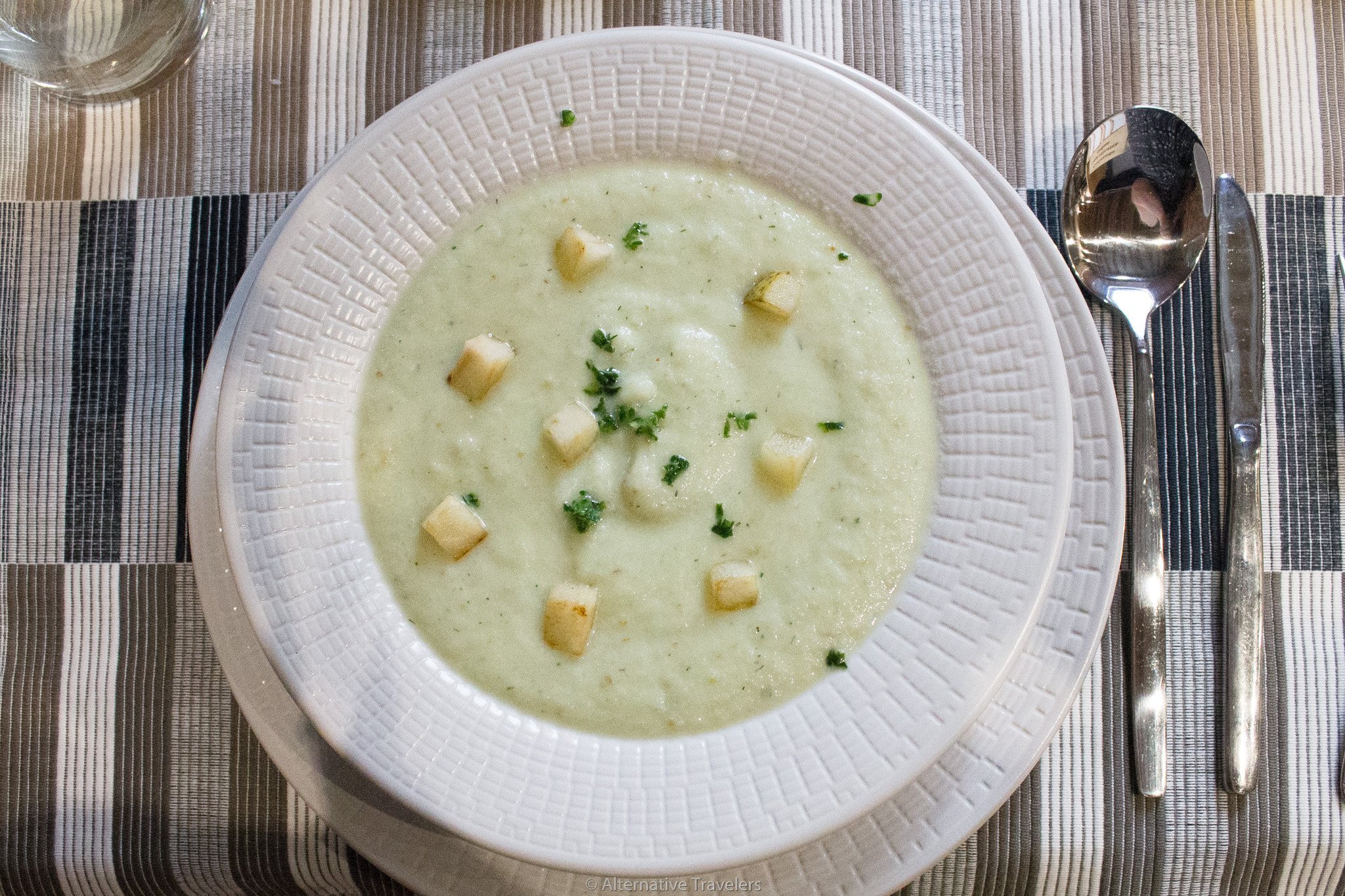 The final plating of the soup.

This soup is influenced by tzatziki sauce, but the Basques go a step further and always blend fruit in.

The main dish was Ternera de Pedro Ximénez. Ximénez is a sherry wine produced mainly in the southern region of Andalucía. This is a traditional plate from Andalucía, originally veal but now made with a pea protein veggie meat. We knew the place was 100% vegan, but the presentation of this dish had me second guessing. 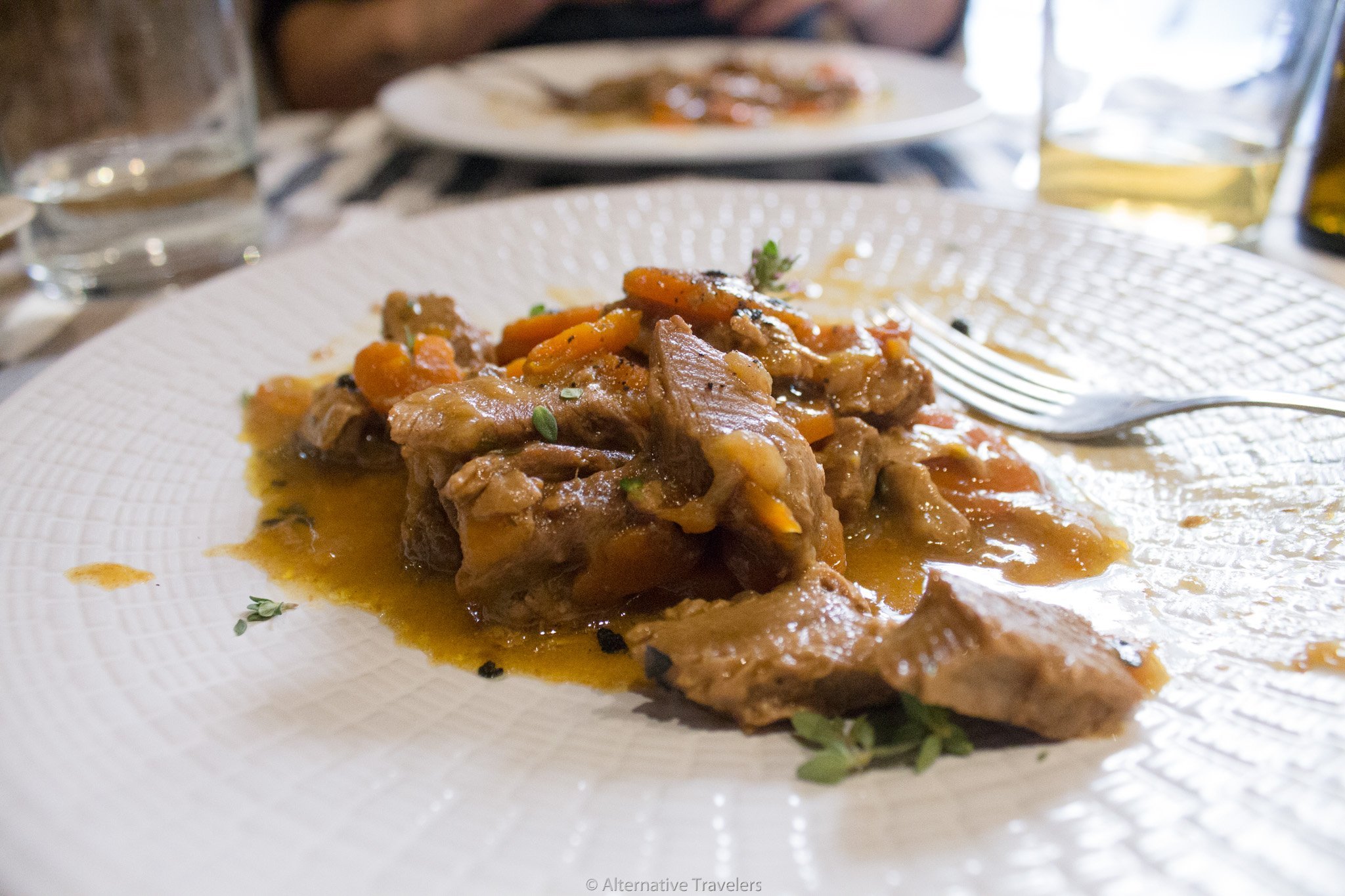 Julian is a stickler for consistency, and specially orders this veggie meat product from Germany (a country that is ahead of the vegan curve, as we experienced in Berlin). He prepares the veg protein perfectly – it’s tender and has a layered texture that comes apart as you chew.

To prepare this dish, he wraps everything frozen in a batch with orange peel and thyme which infuses the flavors. Fresh thyme is the immediate taste, followed by the citrus, and finishes with a sweet note from the Pedro Ximenez reduction. We loved this dish, and I even snagged a piece from Sam’s plate when she wasn’t looking. 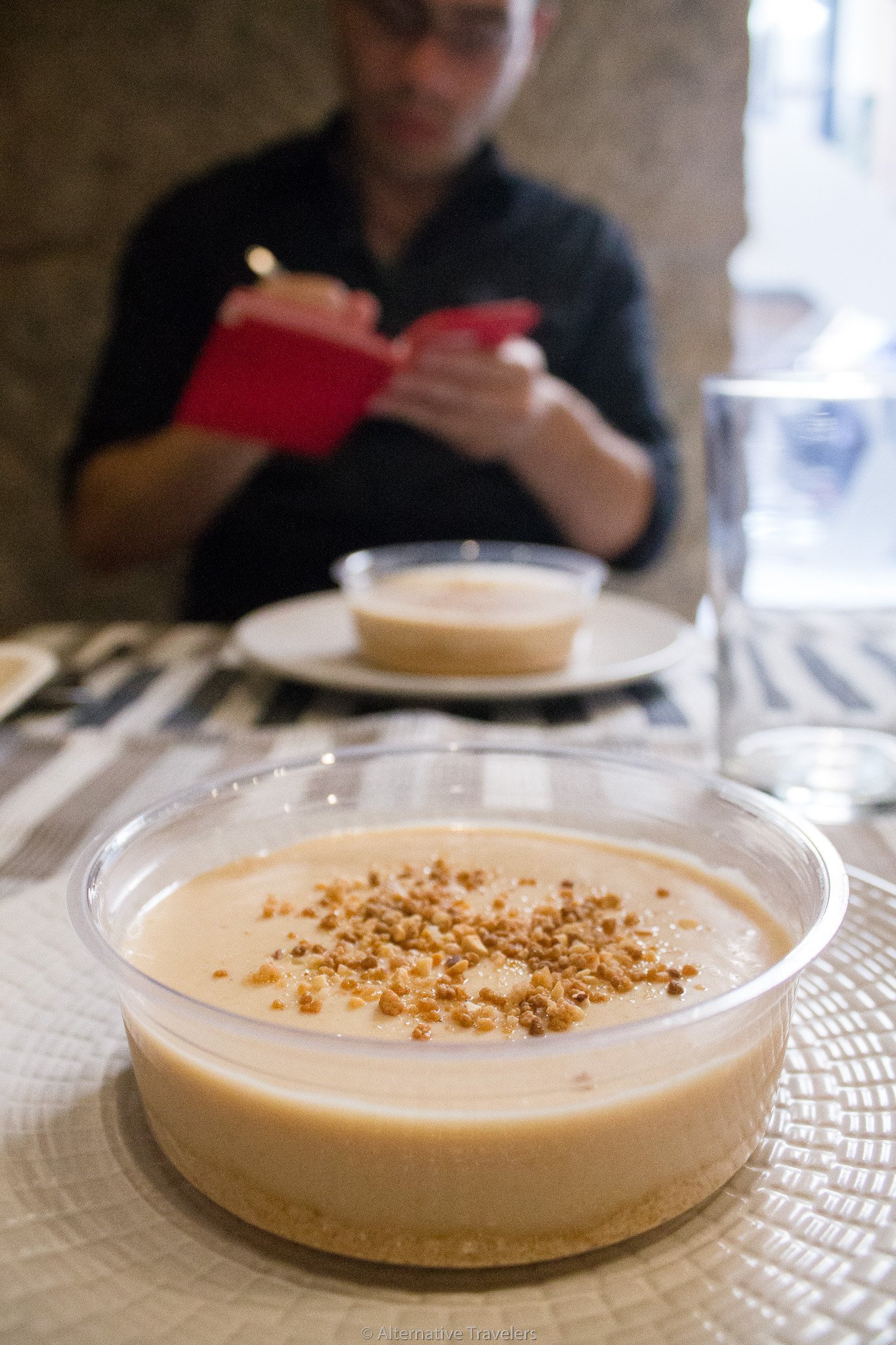 The custard sits on top of a cookie crumbled crust, held together by the custard on top that has a thick, gelatinous texture that’s thicker than pudding, but much heavier than a mousse. Julian gave us one each, but we easily could’ve shared one. 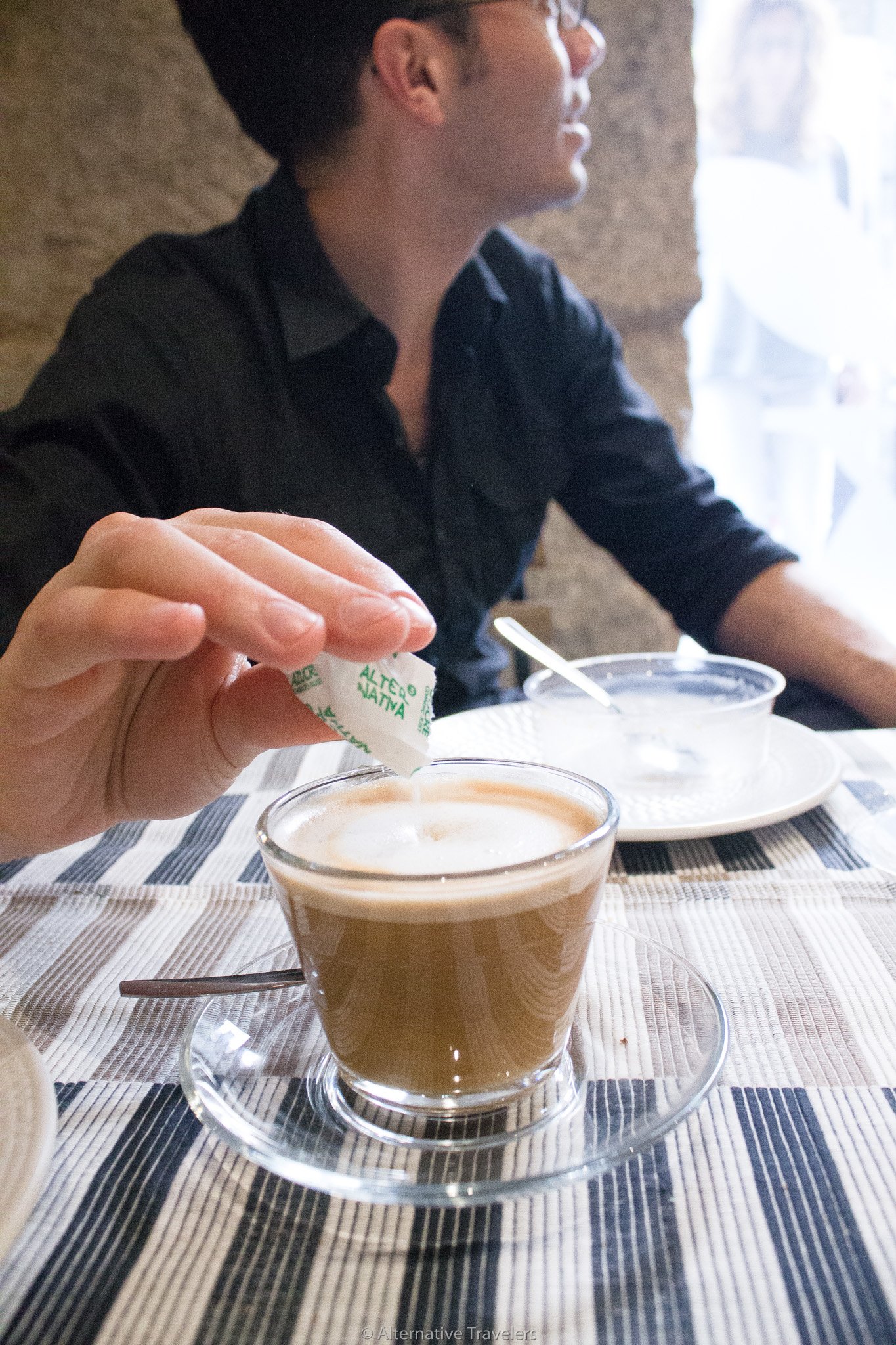 Julian doesn’t shy away from bold flavors. While you may struggle to guess all the ingredients in a dish, usually one or two stand out. Whether it was the caramelized pear and dill in the cucumber soup, the pomegranate lemon in the muhammara, or the citrus thyme of the ternera, Julian prides himself on layering flavors and using the highest quality ingredients, all of which are always organic. It’s this attention to detail that shows his culinary background, but also his joy in watching his guests gleefully devour his creations, that reminds me of a loving parent. The fact that Julian can create such delicious, imaginative, international inspired cuisine AND still retain that warmth and friendliness with his guests made Landareak shoot to the top of our favorite vegan places in Madrid immediately.

Of course, we had one of our most memorable food experiences, along with Tia Carlota, right when we’re about to leave. But maybe it’s the bittersweetness that makes it so special in the end. 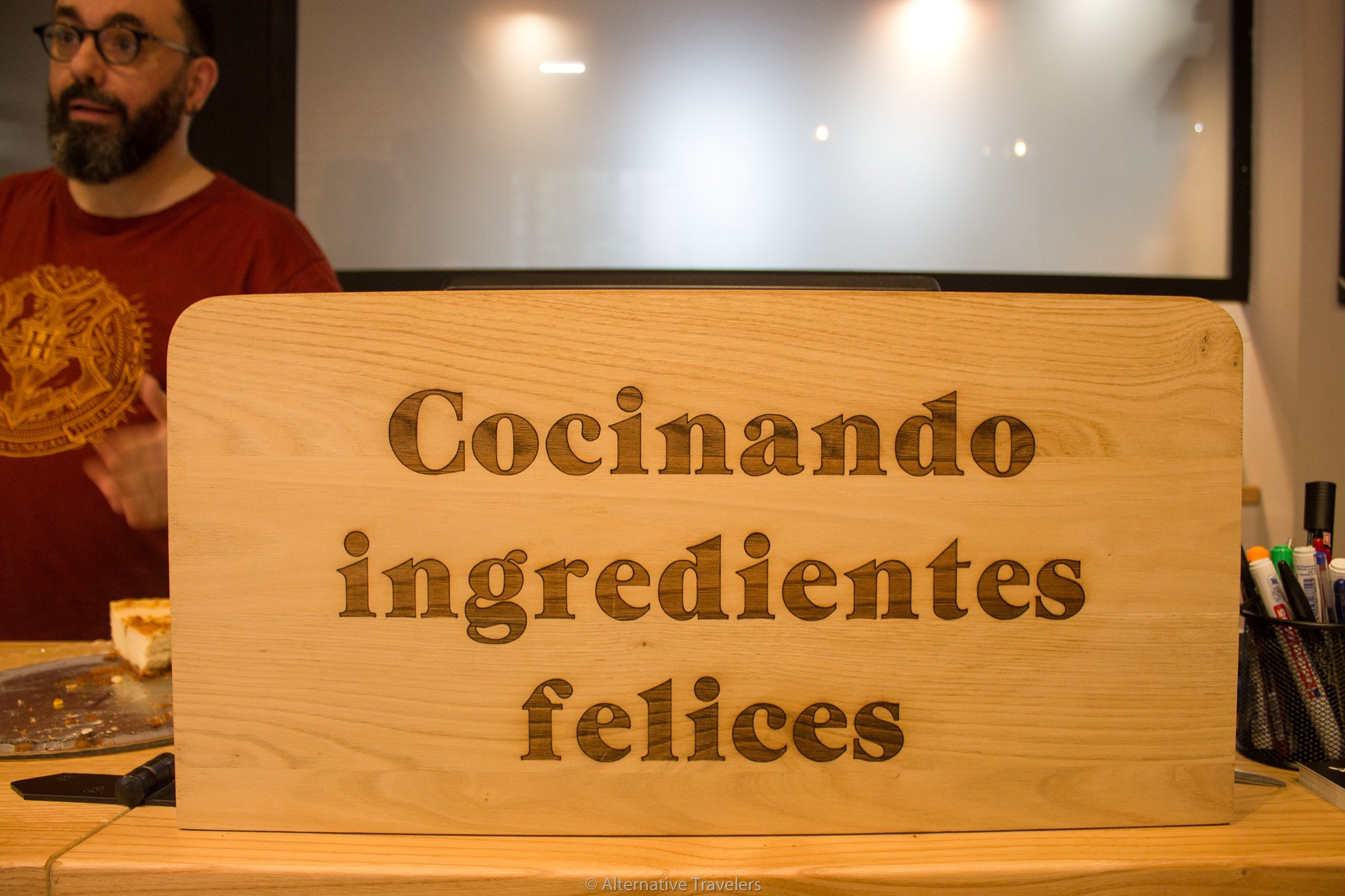 Landareak is a Must-Try for anyone visiting Madrid, but especially for vegans. Those looking to experience authentic Spanish cuisine made vegan, don’t miss out.

It’s listed under MUST TRY in our Madrid Vegan Guidebook.

But there’s many more you can’t miss and there’s only one way to find out:

Check out the Best Restaurants for a Menú Del Día in Madrid for more on the uniquely Spanish Tradition.

If you only have time for tapas, check out our Best Tapas Guide to Madrid.

If you’re looking for the ultimate vegan index of every vegan food listed on Madrid, check out our Ultimate Vegan Guide to Madrid.

Guide to Vegan Tapas in Granada