Could the Highlands be visited without a car?

We were determined to find out.

It’s important to note that the Highlands aren’t one particular place, but rather an entire region of Scotland. Most of Scotland’s population lives is in the lowlands. 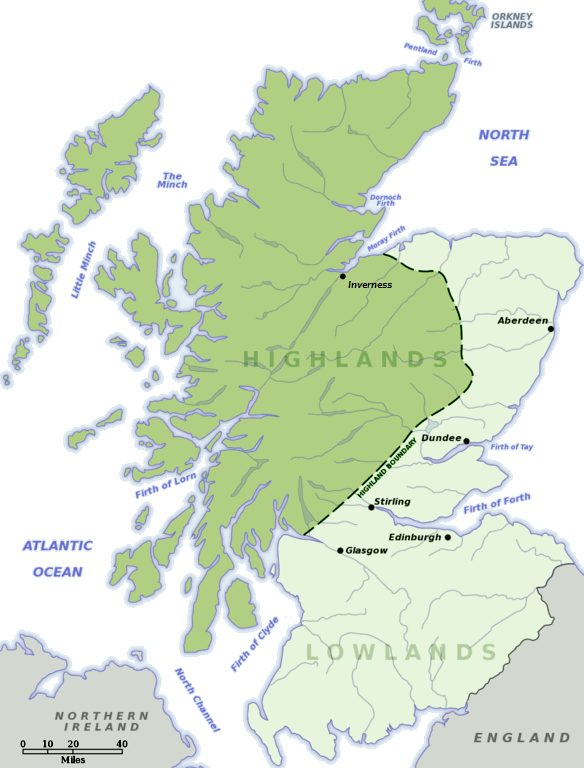 We plotted our adventure to Loch Lomond, one of Scotland’s (two) national parks and one of the most popular places to visit in Scotland. The Highland Boundary Fault passes through Loch Lomond, which is the biggest inland body of water in all of the British Isles. Loch Lomond is also featured in the popular traditional Scottish song “The Bonnie Banks o’ Loch Lomond,” which incidentally was stuck in our heads the whole day.

O ye’ll tak‘ the high road, and I’ll tak‘ the low road,
And I’ll be in Scotland a’fore ye,
But me and my true love will never meet again,
On the bonnie, bonnie banks o’ Loch Lomond. 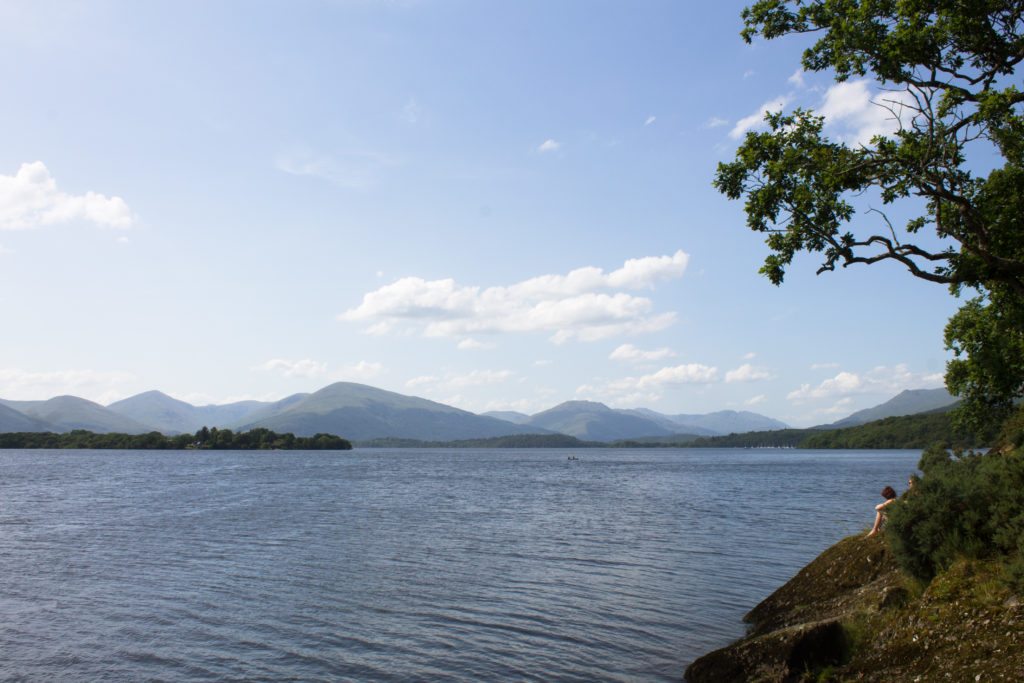 We had planned to explore via bike as we had done on the Isle of Arran, but unfortunately, they were stolen while we were exploring Glasgow on foot. Luckily, there are many ways to visit Loch Lomond.

We suggest taking one of several bus routes deeper into the park. The Balloch Visitor center will help you choose. We took the bus up to Balmaha, in hopes of thinning the crowds and acquiring some unadulterated views of the Highlands. But our suspicion is that you can’t go wrong no matter where you end up. The loch looks beautiful from every angle. 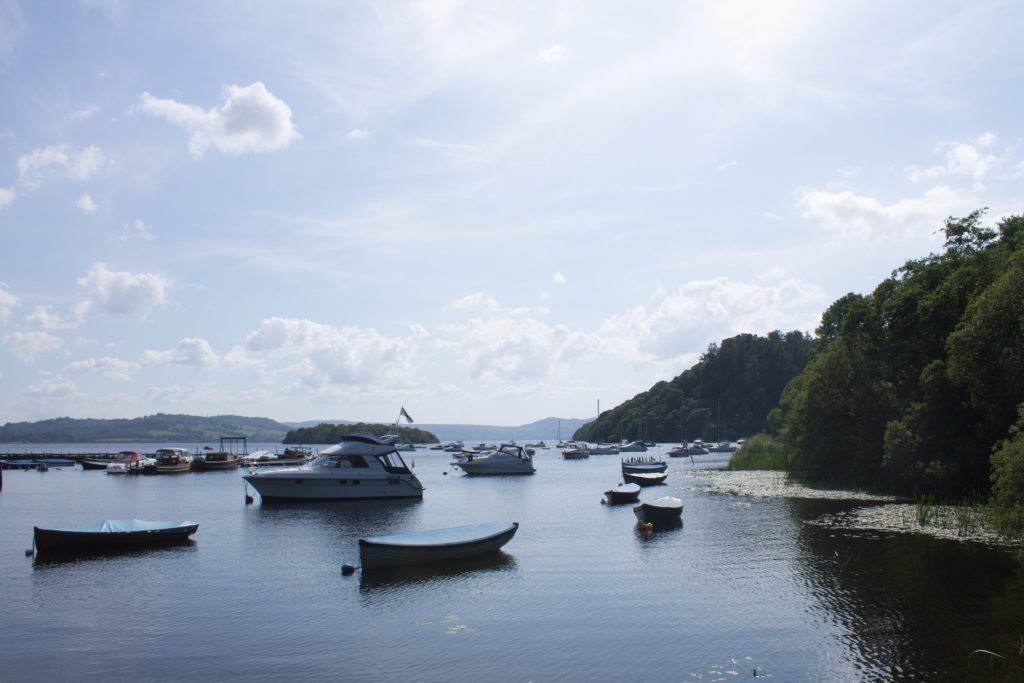 The all uphill climb to Conic Hill is the can’t miss hike in Balmaha. It begins behind the parking lot where the bus drops you off, so it’s easy to find. You’ll pass through lush green forests at first, with ferny undergrowth that’ll transport you back in time to when before humans ruled the earth. 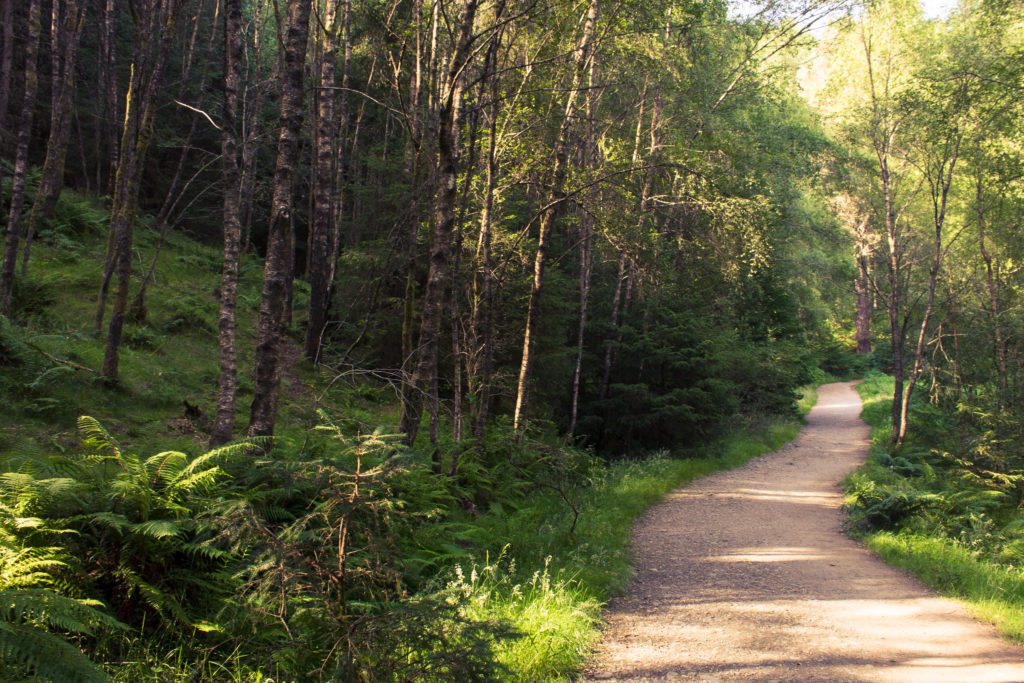 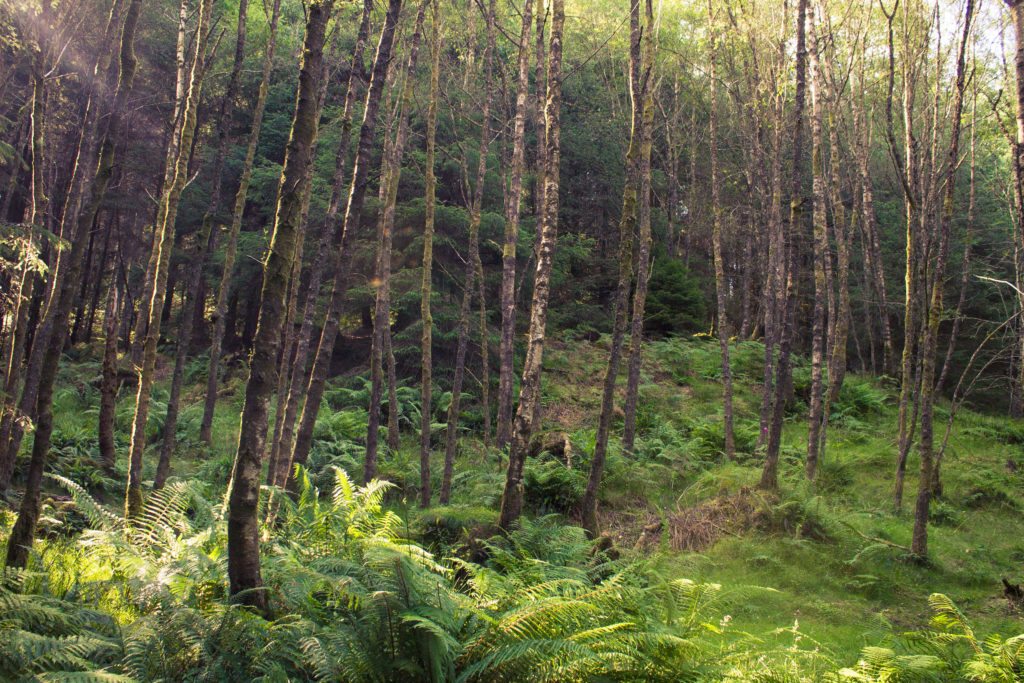 Soon the trees trickle off and you’ll be hiking through the sparse and treeless Highlands. The road gets ever steeper the closer you get to the top, but many patches of this well-worn path have stairs to help you along. Take several breaks if you must – it’s well worth it. Upon reaching the tops of hills, ceaseless winds will not so gently suggest you take a seat to enjoy the view. 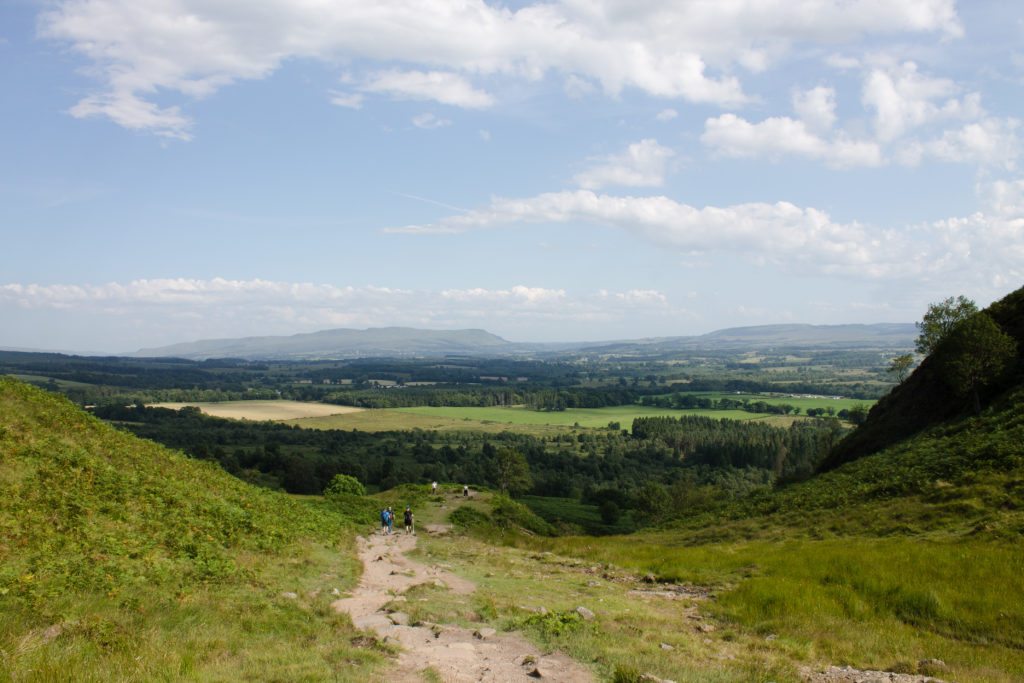 This is where you can literally view the fault line separating the Highlands from the Lowlands. Due to the sedimentary rock composition, lowlands can support much more vegetation, animal populations, and agriculture. The highlands earn their unforgiven nature with the underlying bedrock of impervious schist and shale, refusing any life to crack through – thus the infamous tree-less, bracken laden, super windy slopes. 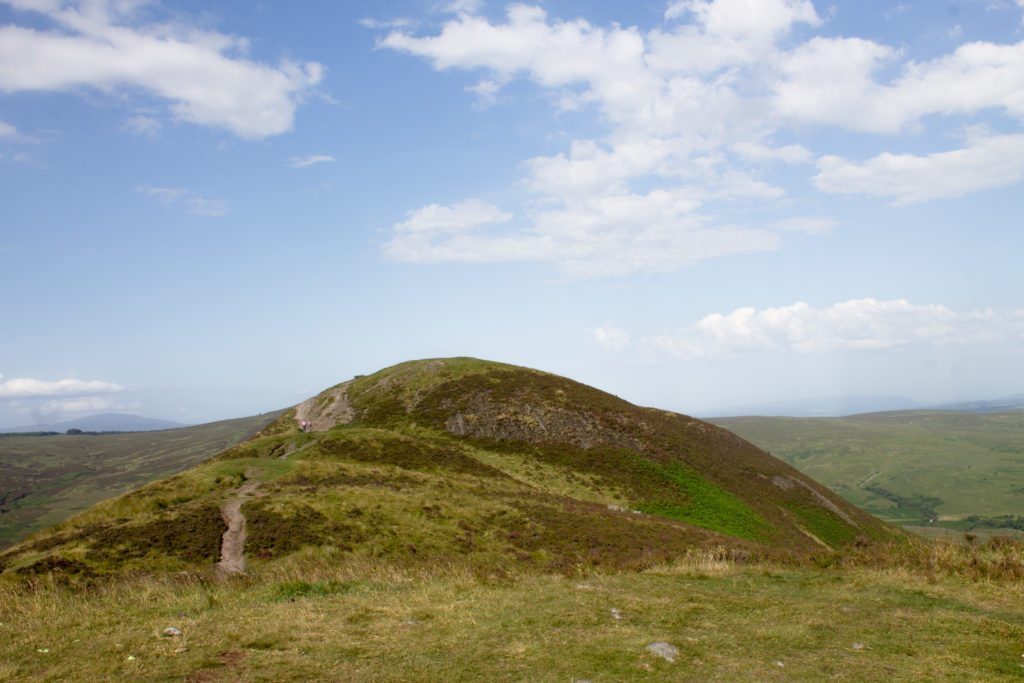 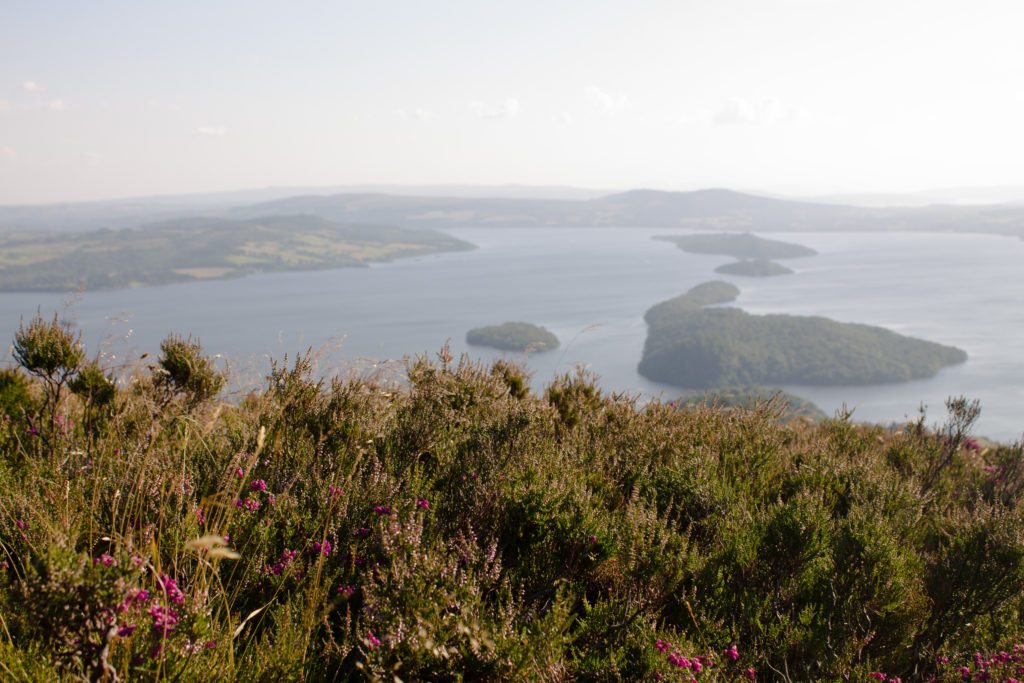 If you have more time, the Millenium Trail follows the shoreline. Again, this is more populated and built up. It was a sunny weekday when we went, and the shores were bustling with families enjoying the rare sunshine. The West Highland Way shares this trail (as well as the trail up to Conic Hill). So don’t be surprised to see people with walking sticks and backpacks laden with sleeping bags and gear! The long-distance path is 96 miles (154 km) long and one we’d love to do in the future. 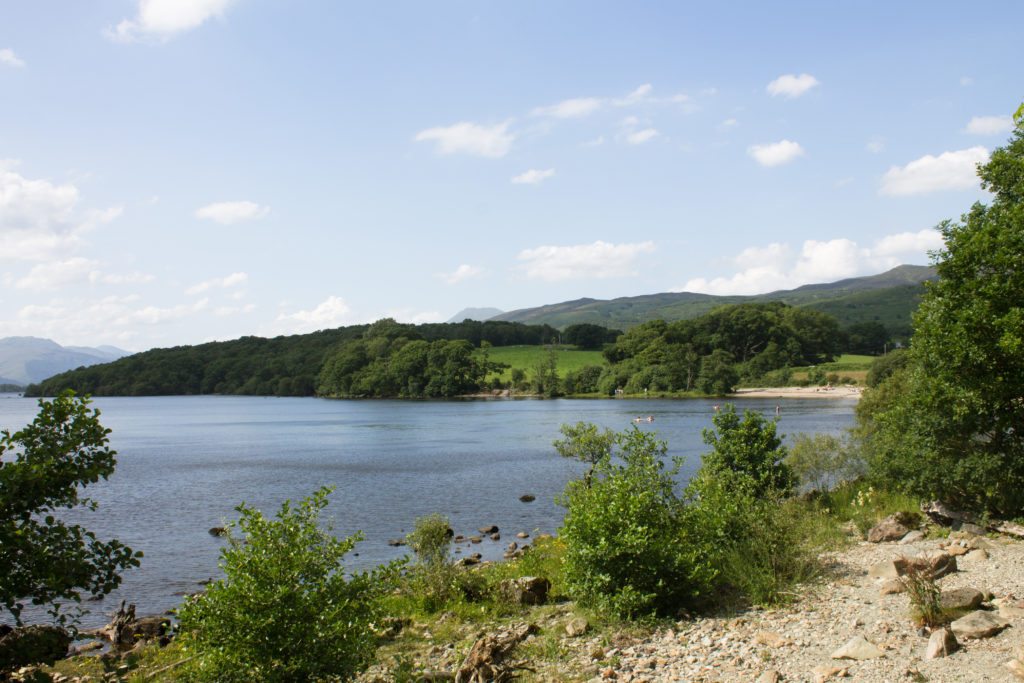 Getting to Loch Lomond from Glasgow (without a car!)

While you may hear that the only way to see Scotland is via car, there is plenty to do sans automobile. Always take these strong suggestions with an equally strong dose of skepticism. Chances are that driving is the only method the rumor slinger tried and they can’t imagine any other way.

The easiest way to get to Loch Lomond is to take the train to Balloch. This gateway town to the National Park has many facilities including a visitor center, pubs, hotels and more. Trains leave about every half an hour from Glasgow Queen Street, but check train times at Trainline to make sure. 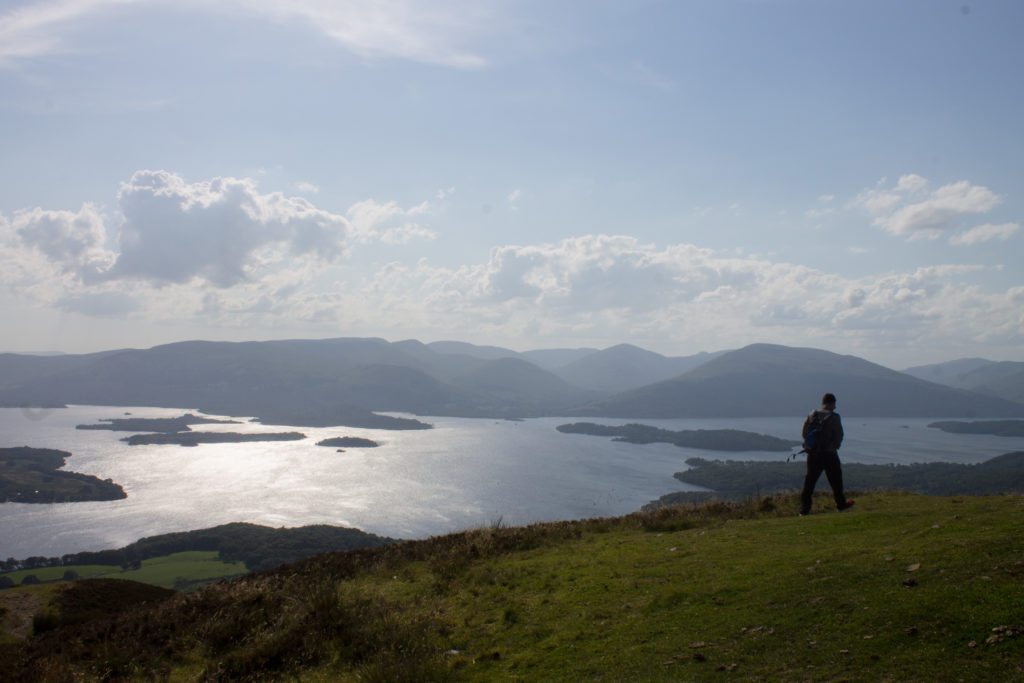 We were happy that we decided to forge ahead and see the Highlands by train. Although some of the lesser known spots are less accessible, there are many buses and ferries. Just be prepared for a longer journey. 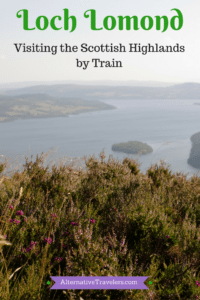 Romans and Royals: A Day Trip to Segovia...