This is how you do a vegan fast food burger joint.

Since moving to Spain in September of 2016, we’ve been much more interested in visiting Spain’s third largest city, than let’s say, Barcelona. Much less expensive, much less touristy, and much less Gaudy. While there’s a lot more we plan to share on Valencia, there’s something we discovered that we couldn’t wait to share – The Vurger, an all vegan fast food joint that we loved so much we went there twice during our weekend trip to Valencia.

When people think Valencia, they think paella. Most people are not thinking a fresh and designed homage to American West Coast style fast food that’s eco-friendly. Who’d have guessed that Valencia, of all places, would have a brand new joint serving impressively well done vegan grubs.

We first went in on a Friday night, expecting the place to be packed as photos online hinted that it might be. But we got lucky – due to a local festival, we were some of only a few people in there. We got a chance to talk with lovely owners Marian and Luis and learn a little more about The Vurger’s history. 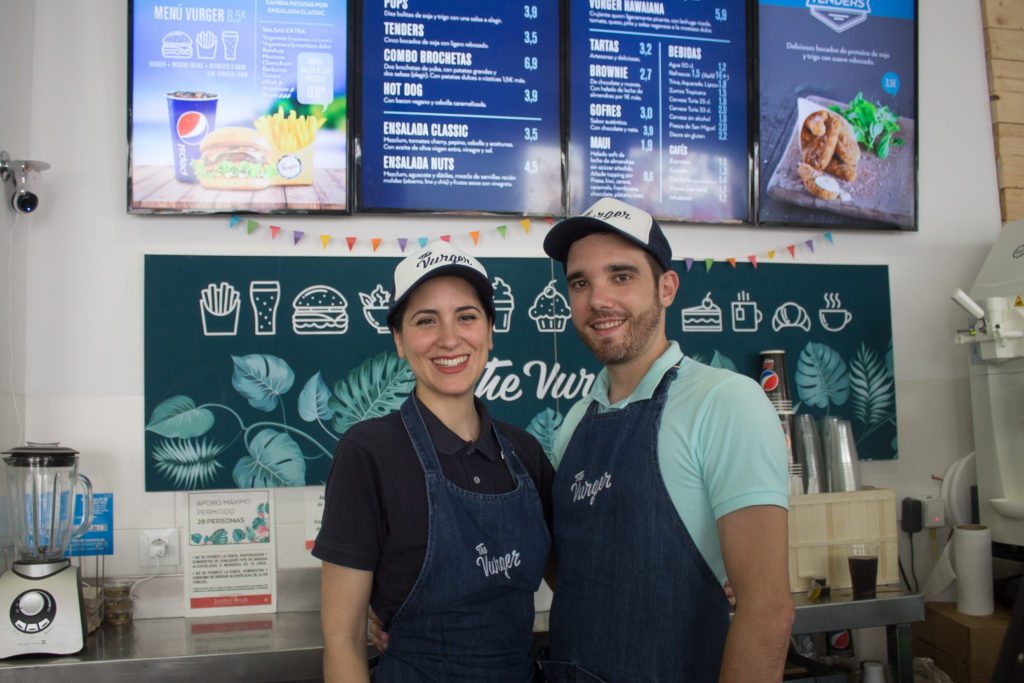 The Vurger started as a little food truck by the beach. This is already rare in Spain as food trucks are not allowed on the streets, only in specific areas. After a year in the food truck, Marian and Luis opened their own brick and mortar location this spring. The Vurger is right in the heart of Valencia’s old town, but away from the most touristy attractions (thankfully). 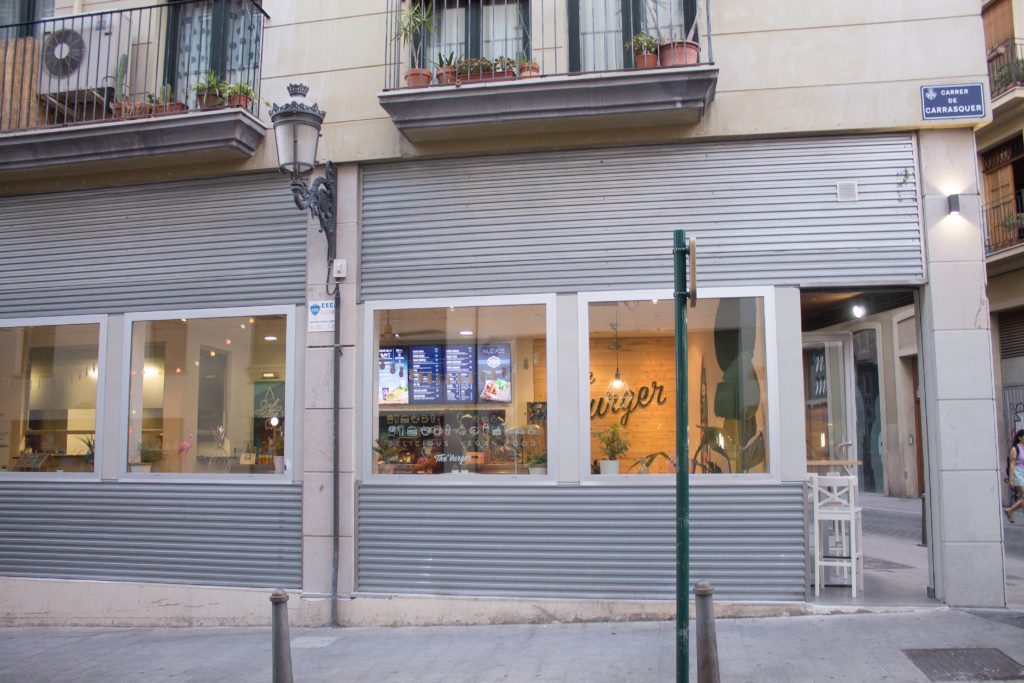 The interior strikes a balance between Americana, fascination and just plain fun. Often in the US, homage is overused as a novelty (consider The Hard Rock Cafe, The Rainforest Cafe, or Jekyll and Hyde Club) and quality food doesn’t make the cut – but not here. Being born in California, as much as I hate the stereotyped images, there is an appeal, and they capture it perfectly. 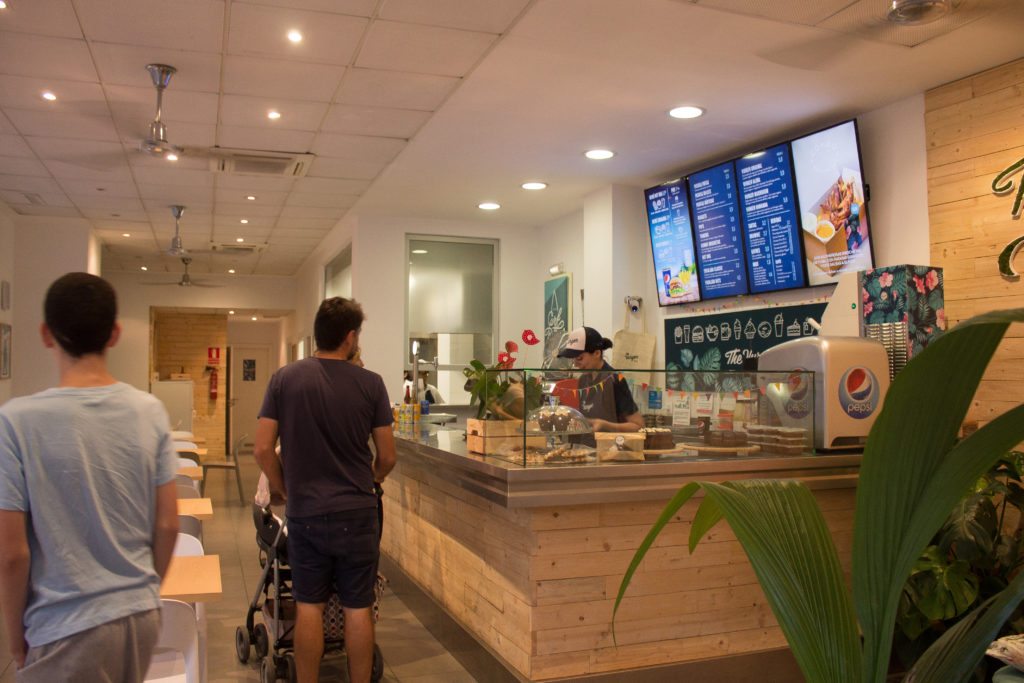 The menu is all encompassing, with burgers, hotdogs, chicken fingers, and something called brochetas which we haven’t quite figured out what they’re supposed to be an analogue of. There are have three types of french fries and almost a dozen homemade sauces. They have salads, gluten free options, and can accommodate most dietary needs.

The Vurger offers several combo meals – called menús, possibly a play off the traditional Spanish menú del dia. These are a great bang for your buck if you want a burger or hot dog, fries, and a drink. Everything is cheaper than if ordered separately. Also, there are upgrade options, with minimal cost, if you want sweet potato fries, for example. But our favorite part was that the main four burgers come with tons of toppings, at no extra cost – and these are available for the combo meals too. This is not usually the case in American fast food spots. 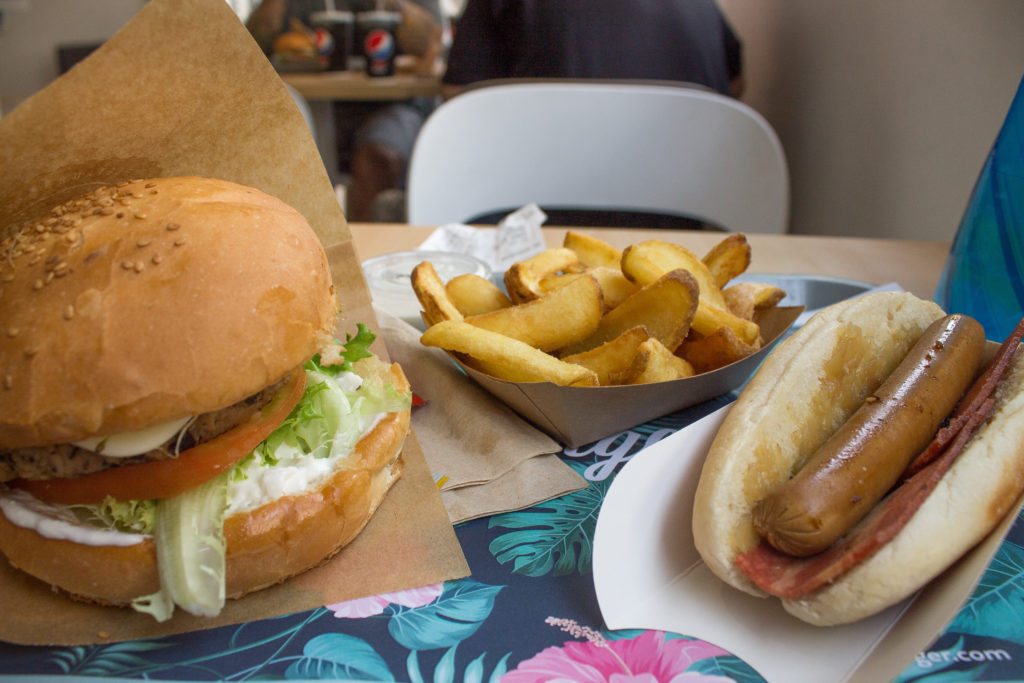 Each burger is quite deluxe on its own – the standard signature one is a bacon cheeseburger. And like a real California burger spot, every burger comes with a generous helping of mayo. We tried their original meaty burger, chicken style burger, and the mushroom burger. All were unique in their own flavor and texture, and equally delicious. Don’t come here expecting a black bean or broccoli patty – these Vurgers are analogues that omnivores would approve of.

We can’t stress enough – the quality and execution of the food is impressive. The fresh baked daily burger buns are so soft and pillowy, they’re what all the other rolls dream they could be. The vegetable toppings are super fresh, as opposed to the off colored tasteless cellulose that characterizes American fast food veggies. And the sauces – you’d want to go back just to try them all. 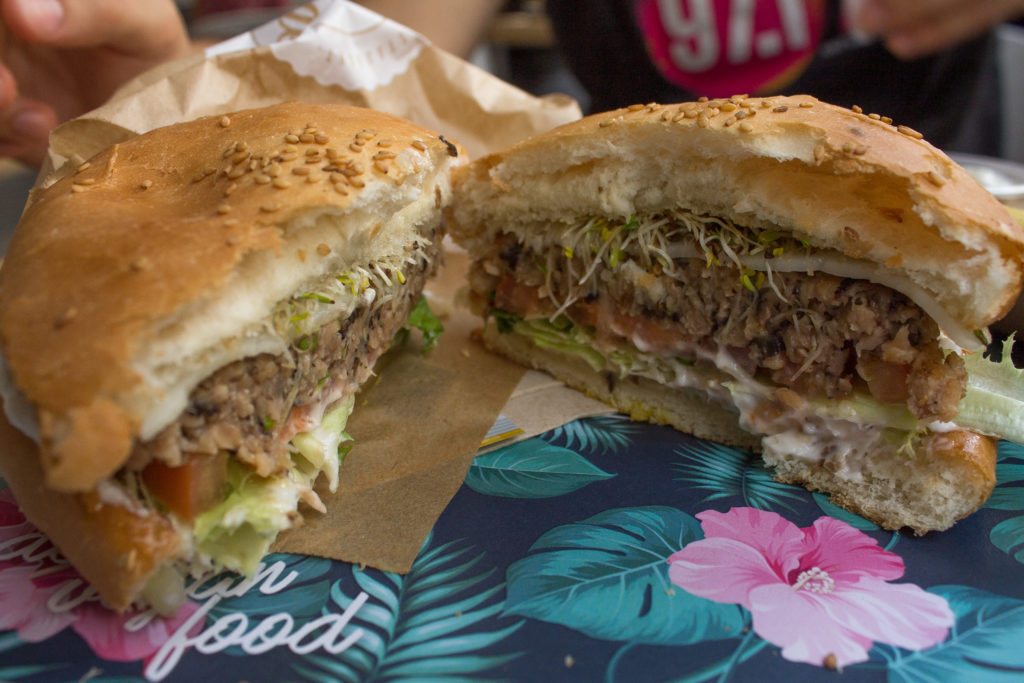 Not to be outdone are the desserts. It was our first time trying soft serve vegan ice cream and we were not disappointed with their almond milk based frozen dessert. Smooth, creamy, and perfectly sweet.

Finally, the last deviation from American fast food is something that Spanish vegan spots seemingly can’t do without – homemade dessert. One was a traditional and decadent Austrian chocolate cake, the Sacher torte. Sam (whose grandmother is Austrian) can attest to its authenticity and quality. This was probably one of the best chocolate cakes we’ve ever had, no exaggeration. 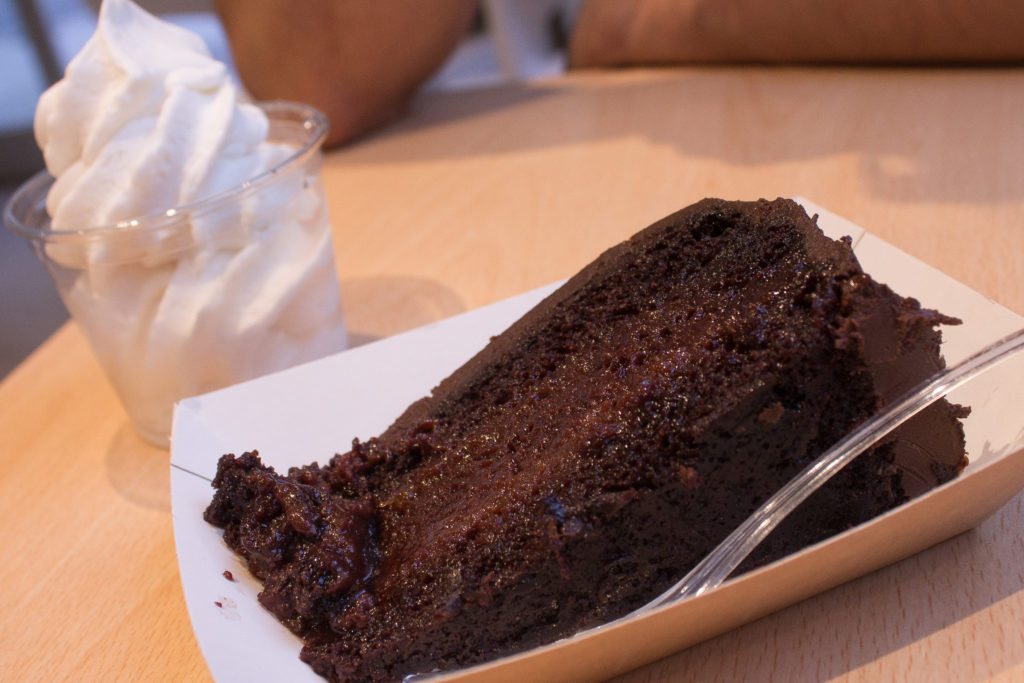 We’re really excited to see more and more vegan places popping up all over this side of the hemisphere. It was neat to see something so American outside of America, with all the good, and none of the bad. We wholeheartedly recommend paying The Vurger a visit!

Live in or visiting Valencia? Then head to our Vegan Guide to Valencia for more vegany goodness.

Alternative Things to Do in Berlin: Subculture, Squats,...

What to Bring When Moving to Spain